The Ecosystem Marketplace plays the fly on the wall at last week's Katoomba meeting in S Paulo, Brazil. 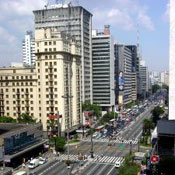 The Ecosystem Marketplace plays the fly on the wall at last week’s Katoomba meeting in S Paulo, Brazil.S Paulo, Brazil Over 500 individuals representing a broad range of stakeholder groups gathered in South America’s largest city for a two-day conference to discuss ways to develop and improve payments for ecosystems services (PES). The meeting marked the 10th annual international meeting of the Katoomba Group, a global network designed to facilitate and promote PES initiatives. The meeting was co-sponsored by Forest Trends, a US-based non-profit, and the Getulio Vargas Foundation (FGV) Center for Sustainable Studies, a department of Brazil’s leading business school. The size and the diversity of the gathering surprised organizers and impressed many participants. The original attendance projections didn’t go beyond 150, said Carina Bracer, manager of the Tropical America Katoomba Group. Noted Steve Schwartzman, co-director of the International Program of Environmental Defense, a US-based environmental group: “Somebody said that if this meeting had been held 10 years ago, hardly anyone would be here—and the handful of people who had shown up would have just criticized the principle. This meeting reflects a big change.” “I’ve been going to various events about climate change and the carbon market over the last five years, ” said Paulo Moutinho, research director of the Amazon Institute of Environmental Research (IPAM), “and this is the first time I’ve seen so many people of different backgrounds. The discussion is not just about carbon credits but a whole series of proposals and ideas. I think that offers a lot of hope.” Schwartzman and others called attention to the role of FGV in attracting participation, albeit modest, from mainstream businesses. Among the companies sending representatives were: the Brazilian state-owned oil giant Petrobr¡s; the country’s largest private bank, Bradesco; and the US multinational aluminum producer Alcoa. “The FGV adds value because it can call some of the still unconverted to the table,” said Mario Monzoni, director of the FGV Center for Sustainability Studies. “Maybe those companies wouldn’t have responded to an invitation from an NGO.” “We need to bring together the economists and the forestry engineers to develop something that will be viable in economic terms,” he added. Monzoni’s idea was reflected in the program. For instance, Costa Rican economist Franz Tattenbach, executive director of the environmental group FUNDECOR, gave a numbers-crunching econometrics presentation about sustainable development in his country – even though many of the equations probably flew over the heads of sundry members of the audience. It makes sense for hardnosed business executives to take a good look at the PES, said Monzoni. “There is an absurd amount of assets not being exploited,” he noted. The IPAM’s Moutinho believes that progress is being made on this front. “I get the sense that we’re going to be able to create a mechanism that will make investments in nature competitive with those in traditional commodities,” he said. Carlos Manuel Rodr­guez, vice president of the global environmental group Conservation International and former minister of the environment and energy of Costa Rica, seemed to agree, though cautiously. “The most important thing about this meeting is mainstreaming and upstreaming,” he said. “That along with the mix of people who have concepts, ideas and theories with those doing hands-on project work. The expectations are high, but if you don’t create the conditions for implementation, you will not be successful.” Based on his experience in government, Rodr­guez stressed the need to attract public officials along with the business community. “No market mechanism will be successful if we don’t understand the way politicians think and talk [and use that information to make the case to them],” he said. In his closing remarks to the plenary, the FGV’s Monzoni seemed to agree: “At future meetings we need to get the minister of finance and the minister of agriculture to come.” For now, however, efforts will be focused on the follow up to this meeting, noted Monzoni: “I see the event as a means, not an end.” A former correspondent in Brazil for The Financial Times and Business Week, S Paulo-based Bill Hinchberger is the founding editor of BrazilMax, a website about Brazilian culture, society and travel, and of the BrazilMax News and Features Agency. First published: October 9, 2006 Please see our Reprint Guidelines for details on republishing our articles.