Brazilian NGO Ecológica has been promoting the social benefits of carbon projects since long before "non-carbon" attributes became fashionable. Now, with voluntary carbon offset projects being judged (and priced) as much for their impact on local communities as for their impact on carbon emissions, they’re taking their methodology global by teaming up with international market players and joining the gaggle of standards with links to registries. 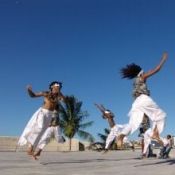 Brazilian NGO Ecolí³gica has been promoting the social benefits of carbon projects since long before “non-carbon” attributes became fashionable. Now, with voluntary carbon offset projects being judged (and priced) as much for their impact on local communities as for their impact on carbon emissions, they’re taking their methodology global by teaming up with international market players and joining the gaggle of standards with links to registries.

31 October 2008 | Rice grows in boat-shaped husks that taste nutty-soft when steamed to perfection – a treat most of us never get to enjoy (and those of us who do aren’t, as a rule, impressed). That’s good news for Ceramicas Reunidas, a family-owned Brazilian brick production company that recently earned carbon credits for switching its fuel from rainforest trees to discarded rice husks.

It’s a small project, designed to reduce emissions by just 16,000 tons of CO2 per year by switching from non-renewable biomass or fossil fuel to renewable biomass, but the focus of the project expands beyond sequestration to the human dimension. The fuel switch and technology upgrade was carried out in accordance with Social Carbon Methodology (SCM), a set of procedures designed over the past decade to promote carbon offset projects that contribute to sustainable development in local communities.

Like the better-known Climate, Community, and Biodiversity (CCB) Standards, SCM is not a stand-alone tool that defines agreed-upon methods for measuring carbon capture itself. That’s left to entities like the Voluntary Carbon Standard (VCS). Instead, SCM is a sustainability screen: it helps identify and promote “non-carbon” benefits flowing from projects that already meet the requirements of basic carbon standards.

“There will not be a separate certificate issued for Social Carbon credits and VCS credits,” says Stefano Merlin, the Italy-born economist who helped spearhead the development of SCM. “Instead, the Social Carbon designation will be embedded in a tag on the VCS certificate, so it may say ‘VCS/Social Carbon/001’ or something like that.”

“Social Carbon breaks sustainability into six ‘resources’ (see below), which is pretty comprehensive in terms of coverage of aspects of sustainability,” says Jochen Gassner, Director of Climate Neutral for German carbon broker First Climate. “They’ve got their indicators for all of these aspects, which is a good complementary assessment to what the normal standards such as VCS and VER+ do.”

Although new on the global radar, the SCM has been in the works for roughly a decade.

“It evolved as a methodology before you had the concept of a formal standard like the VCS,” says Merlin, who in 2000 co-founded the Ecolí³gica Institute together with Brazilian agronomist Divaldo Rezende.

Ecolí³gica is a Brazilian non-governmental organization (NGO) that promotes sustainable solutions to environmental problems, and the methodology was created to monitor the Institute’s own projects.

“We started working on it in 1998, and it evolved over time,” says Merlin. “Only recently did we start calling it a standard, but it’s really a methodology.”

Today, Ecolí³gica administers the methodology, with projects being verified by third-party entities such as the Brazilian division of Germany’s TÃƒÅ“V Nord.

CantorCO2e and TZ1: Taking it Global

More than 80 Latin American projects have so far become SCM-certified, but the methodology remained one of Brazil’s best-kept secrets until earlier this year, when Ecolí³gica and London-based project developer CantorCO2e launched the Social Carbon Company to develop projects around the world in accordance with SCM.

“The mission now is to expand beyond the boundaries of Brazil, and spread to as many organizations as possible,” says Merlin, adding that it’s easier to grow internationally with a global partner like Cantor, and that some of the profits from the company will be funneled back into Ecolí³gica. “The company licenses the Social Carbon Methodology to implement projects, and the Social Carbon Company is also a project developer utilizing the methodology.”

This week, Social Carbon and New Zealand-based environmental markets infrastructure provider TZ1 announced that TZ1 would act as the global registry for Social Carbon Credits – which are defined as carbon credits that have been validated under both SCM and a more basic standard, such as the VCS or even the Kyoto Protocol’s Clean Development Mechanism (CDM).

TZ1 is one of four registries selected to support VCS credits under a system that is still being put into place. It’s also the only registry that can initiate Social Carbon credits, but these credits can then be transferred to other registries acting in support of VCS once the four-registry system gets off the ground.

The challenge now is for Social Carbon is to differentiate itself from existing “co-benefit” standards like the CCB Standards and carve out its own niche in the market.

“Some areas of differentiation are obvious,” says Merlin. “For example, CCB is forestry-focused, while Social Carbon covers more technologies, like energy efficiency, fuel-switching, and small-scale hydro.”

But, while SCM has broader coverage than CCB in terms of carbon-reduction technologies, it has a narrower focus in terms of non-carbon benefits.

“You could argue that CCB focuses more on biodiversity than we do, while we focus more on sustainability,” says Merlin, adding that SCM does measure biodiversity, but sees it more as a resource that contributes to sustainable development than as an end in itself.

“Both methods are very comprehensive,” says Gassner. “We use both Social Carbon and CCB, depending on what type of project it is.”

Joanna Durbin, head of the CCB Alliance, agrees on the distinction – to a point.

“We come from a broad group of environmental NGOs, many of them concentrated on biodiversity,” she says. “Also, because we’re focused on land-based projects, biodiversity is a bigger issue, which it isn’t for energy projects.”

She emphasizes, however, that the CCB Standards do require proof of positive impact on communities, even if they don’t go into as much detail on how to foster sustainable livelihoods. She says the two initiatives don’t so much compete as they “fit together” – partly because of the slightly different focus, but also because one is a standard that focuses on results, while the other is a methodology that focuses on procedures.

“We’re not prescriptive about the methodology that a project uses,” she explains. “Rather, we say that a project has to demonstrate that it has identified the local stakeholders and gotten them involved, and that it has a net positive impact on local communities and has mitigated potential off-site negative impacts.”

The two are not mutually exclusive, and she believes we will one day see projects developed using Social Carbon Methodology that then get verified according to the CCB standard.

“That could make it difficult for SCM,” says Gassner. “There is some discussion of criteria for eligibility of standards that will be recognized by the International Carbon Reduction and Offset Alliance (ICROA), and the way the conversation is going, they will say that any approved standards should be governed either by an alliance or by a company that doesn’t have business interests other than the standard.”

SCM is built on the work of researchers Robert Chambers, Gordon Conway, and Ian Scoones, who defined what constitutes a sustainable livelihood. Scoones then came up with five different “resources” that contribute to sustainability (natural capital, economic or financial capital, human capital, social capital, and physical capital).

Merlin and his team adopted four of the resources for their methodology and then added two of their own: biodiversity (or technology, depending on the type of project) and carbon. They also decided to rate the availability of each resource in a particular region, and support projects that promote that availability (see “Social Carbon Guidelines”, right).

They define the resources as follows:

Biodiversity Resource The combination of species, ecosystems and genes that form the biological diversity present in any region. Relevant aspects of this component are the integrity of natural communities, the way people use and interact with biodiversity, the state of conservation, pressures and threats imposed on native species, and the existence of priority areas for conservation.

Financial Resource The basic capital (money, credit/debt and other economic goods) available to people and organizations.

Human Resource The skill, knowledge and capacity for work that people possess, as well as good health.

Carbon Resource The type of carbon project being developed.

Carbon Change and Forestry: a REDD Primer
Registries: Tracking the Trades
VCS Opens Can of Registries
Download State of the Voluntary Carbon Markets