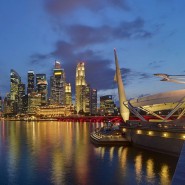 13 February 2014 | Despite its status as a leading Asian economy, Singapore has lagged behind its neighbors in developing carbon offsets. But the sale of two energy efficiency projects could pave the way for more to come in this densely-packed, high-tech country. The first project replaced five chillers, and saved an estimated 2,169 tCO2e, through improved cooling installations at New Tech Park, while the second saves a similar amount – 2,397 tCO2e per annum – replacing inefficient light bulbs with LED lights at Jurong Town. The Jurong Town project refitted more than 86,000 LED in 588 residential building corridors, staircases and communal areas.

“[Singapore] has a great track record in technology so energy efficiency is a good fit,” explains Grattan MacGiffin, a manager at Ecoinvest Services, about the Swiss-based company’s decision to acquire 8,469 Verified Carbon Units (VCUs) from both projects.

India and China have traditionally provided the lion’s share of Asia-based offsets. But Southeast Asia’s total volume of voluntary carbon offsets grew to 3 million tonnes (MtCO2e) in 2012, according to Forest Trends’ Ecosystem Marketplace’s State of the Voluntary Carbon Markets report. Among the newer players contributing to growth in the region – including Thailand, Cambodia, Indonesia, Malaysia and the Philippines – Singapore was noticeably absent.

Not for long, hopes MacGiffin. The success of these initial projects could lead to more offsets in the future as both methodologies could be easily replicated throughout Singapore. “This will be a test case. Let’s see who buys these and maybe we can draw some parallels.”

Now that they have the credits, Ecoinvest will begin the search for buyers. Though it’s too early to identify any specific parties, MacGiffin believes the projects will appeal to a range of buyers because of their emphasis on technology investment and resulting social impact through reductions in energy costs. Businesses understand that it makes sense “to save money as well as to save the environment,” he said.

Sticking true to historic transactions, the European market might be interested. In last year’s State of report, energy efficiency projects in Asia grew significantly in market share and were predominantly purchased by those buyers. Last year’s report also witnessed a significant increase in the purchase of Asian offsets by Asian buyers – so there’s potential for Ecoinvest to find a buyer closer to the projects’ home.