The REDD+ Partnership was supposed to provide an “action track” to help countries that support REDD develop financing and pilot projects that save forests and reduce greenhouse gas emissions from deforestation and forest degradation.  Negotiations, however, have split along the same demographic lines that hobble UNFCCC negotiations. 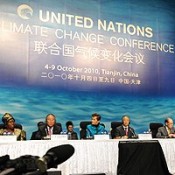 6 October 2010 | The REDD+ Partnership was supposed to provide an “action track” to help countries that support REDD develop financing and pilot projects that save forests and reduce greenhouse gas emissions from deforestation and forest degradation.   Negotiations, however, have split along the same demographic lines that hobble UNFCCC negotiations.

The Partners are meeting in   Tianjin, Chin, on the sidelines of   the last major UN climate-change meeting before year-end talks in Cancun.

The week began with frustration on the part of developing countries, angry over industrialized nations’ refusal to discuss issues of action in 2011 and 2012.

“Developed nations seem content to simply agree on operational measures for 2010, and will not entertain scaling up of REDD+ finance and action or results-based payments,” a source close to the negotiations said on Tuesday. “Things may come to a head tonight.”

The Partnership is open to “all active, registered NGOs of the UNFCCC”, which is roughly 1200 organizations, as well as NGOs that are members of the Forest Carbon Partnership Facility Participants Committee and the UN-REDD Policy Board.

On Monday, a drafting group comprised of developed and developing countries met to address issues such as scaling up of finance and action on REDD+, as well as results-based payments for REDD+ actions.

On Wednesday, negotiations bogged down when the Partners refused to let stakeholders into the room where Modalities for Stakeholder Participation were being discussed.