Subsistence farmers in the hills above Kenya’s Lake Naivasha face an uncertain future, and climate-change has only made it worse. Here’s how WWF and CARE teamed up to harvest payments for watershed services that might help those farmers through the coming bad years – and, in the process, save the lake below. 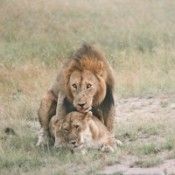 This is the second in a four-part series examining the interplay between economy and ecology in the Lake Naivasha Watershed.

7 March | NAIVASHA | Kenya | For years, Chege Mwangi watched helplessly as the rains washed bits of his steep one-acre farm high in the Abardares Hills down into the Terasha River below. He knew that he was watching his family’s future dribble away with it, but he didn’t know what to do.

Meanwhile, 40 kilometers (25) miles downstream, flower-growers on Lake Naivasha were noticing things as well. Sedimentation was gunking up the lines for their greenhouses, and water hyacinths had blanketed parts of the lake, killing the fish below.

“It all fits together,” says Peter Muigai, a community mobilization officer for WWF, as he looks out over Mwangi’s now-thriving acre of land. “For Naivasha to exist, the rivers from this side of the catchment have to flow, and increasingly, they don’t.”

He’s working with farmers in these hills on an ambitious Payments for Watershed Services project that aims to tap the wealth of Lake Naivasha flower-growers – as well as geothermal providers and hotels – to help upstream farmers like Mwangi implement sustainable agriculture practices. If the plan works, it will reshape the landscape across Lake Naivasha’s 3400-square-kilometer (2100-mile) catchment and preserve an economy that employs hundreds of thousands of people. If it fails, there’s little hope that those who live off the lake can continue to do so.

“There’s a lot riding on this,” says Daniel Koros, a 40-something veterinarian who’s been with WWF for two decades. “It’s a test of ideas we’ve been developing since before I got into this business.”

Koros started as a volunteer with WWF in the early 1990s before signing on as an employee in 1996. Since then, he’s been working on programs that combine conservation with sustainable livelihoods – first with Maasai herdsmen in the nearby Maasai Mara National Reserve and Tanzania’s adjacent Serengeti. Since 2011, he’s been here in Naivasha, where his title is Project Partnership and Liaison Officer for the PWS project.

“Looking back, I can see we were evolving towards PES (payments for ecosystem services) from the start, but we didn’t call it that,” he says. “Even in the early 1990s, we were beginning to realize that if you didn’t attack livelihood issues, you weren’t going to have a lasting impact on conservation.” WWF and CARE: of Plants and Poverty

The project began as a joint venture with CARE (Cooperative for Assistance and Relief Everywhere) – a humanitarian organization better known for poverty-alleviation than environmentalism. Koros says that’s because PES is one of a growing number of areas where the missions of the two organizations overlap.

“If you’re lifting people out of poverty by teaching them sustainable agriculture, what you’re really teaching them is how to make a living while conserving nature,” he says. “That’s what brings an organization like WWF into a program like this.”

The growing cooperation between the two groups has led each to appreciate how the other’s focus dovetails with its own.

“CARE are good with market linkages, while we are good with conservation and community mobilization,” says Koros. “Working together, we were able to achieve things neither of us could on our own.”

That’s reflected in the way each organization measures its success.

“We’re moving away from the kinds of conservation-oriented numbers we used to focus on,” says Koros. “For example, we used to look at how many trees or fruits were planted, but now we look at how peoples’ lives have changed.

That’s because people trapped in an unhealthy economy need to chop trees and harvest fruits with only tomorrow in mind. If the economy is healthy, it can survive without cannibalizing its future.

The most obvious way for Mwang to work his farm with tomorrow in mind is to build terraces – an activity the government widely supported until budget cuts started taking effect in the early 2000s. By 2006, WWF had decided to try and pick up the slack.

Using satellite images provided by the Ministry of Agriculture, they looked for parts of the Naivasha watershed with steep slopes, intensive agriculture, and direct routes to the water – all of which lead to excessive runoff. After identifying parts of five different catchments, they commissioned more detailed hydrological and sociological assessments that pointed them to two sites that they felt were contributing more than their share of degradation. One is in the Upper Turusha catchment, where Mwangi lives, and the other is in the nearby Wanjohi catchment.

The initial plan was to approach farmers in the catchments and see if they’d be open to terracing – but the answers were far from encouraging.

“Terracing is expensive and disruptive,” says Muigai. “The farmers said they couldn’t do it without a lot of support, and the feasibility study found other problems.”

Chief among these was the issue of maintenance: Aware of its own precarious situation, WWF wanted to make sure it was creating something that could go on without them – so even if they ran out of funding, the farmers wouldn’t be left in the lurch.

In place of terracing, the study recommended strips of mfufu, or Napier grass, every ten meters or so along the length of the hill.

Long a favorite of cattlemen, Napier grass is now a staple of sustainable agriculture programs across Kenya – and with good reason. First, it needs little in the way of water and fertilizer. Second, it attracts predatory insects that devour pests. Third, it pulls nitrogen from the air and “fixes” it in the soil, where it acts as a natural fertilizer. Fourth, it captures soil that slides down the hills whenever the rains come. Finally, as cow food, it provides fodder for dairy operations. By planting strips every ten meters, WWF hoped to create natural barriers that would capture sliding dirt and fertilizer before it became runoff – forming natural terraces over time.

Then there was the question of outreach: even if WWF came up with a plan that was low-cost and low-disruption, how would they explain it to the people in the hills?

“Farmers everywhere are very leery of anyone coming onto their land, offering ‘change’,” says David Mbugua, Secretary of the Upper Tarusha Water Resource User Association (UTWRUA), a private organization that coordinates water issues in Mwangi’s region. “Here, that leeriness is compounded by our colonial history – farmers generally suspect what you’re really doing is coming to take the land.”

Genesis of the PWS Program

WWF’s regional freshwater coordinator for Kenya, Robert Ndetei, felt that he could bring in the farmers if he just had a carrot – and that’s when he heard about a new program called Equitable Payments for Watershed Services (EPWS).

Launched jointly by WWF Netherlands (WWF-NL), CARE, and the International Institute for Environment and Development (IIED) with funding from the Dutch Directorate General for International Cooperation (DGIS) and the Danish International Development Agency (DANIDA), EPWS is a multi-year, global effort to push the envelope on PWS.

“We wanted to test the concept in different jurisdictions and under different circumstances to see what works, what doesn’t, and why,” says Julio Tresierra, who started EPWS within WWF-NL and has been spearheading it ever since. “We wanted to make sure we were looking at real-world scenarios that delivered real-world lessons and that could be scaled up if successful, but CARE also wanted to test the social impact as an end in itself rather than a means to an end.”

Ndetei reached out to his local counterpart at CARE, and together they decided to bring in a PWS element – one that would encourage downstream users to work with farmers up in the catchment. Their proposal was designed to both test the willingness of downstream users to pay for PWS and to experiment with ways of incentivizing upstream sellers to join the program.

When their project got the nod, CARE hired Muigai, who had impressed them four years earlier as a young college grad volunteering in Nyanza Province. There, he’d helped farmers develop marketing strategies until the Ministry of Agriculture hired him to do essentially the same job in 2005. In 2008, CARE hired him to work with farmers on the PES effort, and he in turn reached out to Mbugua and others in the upstream catchments.

The program was designed to work within the institutional framework established by the Water Act of 2002, which replaced the Ministry of Water and Irrigation’s centralized water management system with a decentralized system coordinated by a new entity: the Water Resource Management Authority (WRMA), which further delegates implementation to regional offices in each of Kenya’s six catchments.

Those offices then further delegate implementation to Water Resource User Associations (WRUA) like the UTWRUA where Mbugua works. These serve specific users within catchments and sub-catchments.

“The Ministry still determines policy, but WRMA implements it,” says Abigael Tamooh, Technical Officer, for the Lake Kaivasha Water Resource Users Association (LANAWRUA), which is the wealthiest and most advanced of the WRUAs, largely because of the flower growers. It’s one of 12 WRUAs in the Naivasha catchment.

“UTWRUA is about as far upstream as you can get, and we’re as far downstream,” she says. “But we’re inextricably linked to each other.”

“We each have dual responsibilities,” he says. “We need to sell our members on participating, but then we have to negotiate on behalf of our members to get the best deal.”

And that, it turns out, isn’t as easy as it seems.

Next Week: Selecting the Sellers, Pitching the Buyers