The Conservation Fund has spearheaded an effort to preserve a swath of rare and endangered river-swamp forest by cashing in on the ecosystem’s natural ability to filter water. This massive mitigation bank shows that bigness has its environmental benefits, but can it turn a profit? The Ecosystem Marketplace examines this exciting new project’s chances for success, and the challenges it faces. 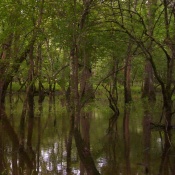 22 October 2008 | They say that everything is bigger in the US state of Texas – the money, the houses, the cars, the hair – and now the largest wetland mitigation bank in the world, a 19,000-acre, 45-mile long preserve called the Pineywoods Mitigation Bank, where developers that destroy wetlands in the same watershed can purchase shares to compensate for the loss they create.

It captures an entire forest ecosystem and embraces a business model to promote the future of so-called “bottomland hardwood forests“, which are essentially river swamps with trees: forests that start at a river’s headwaters and end in an ocean estuary. They are considered one of the most spectacular and endangered types of ecosystem in the United States.

The Benefits of Bigness

Running along the Neches River and connecting two national forests (the Angelina and the Davey Crockett), the bank’s massive size gives it the ability to overcome the often fragmented ecological and economic benefits that result from standard mitigation banks that typically restore smaller, disparate parcels of wetland ranging from one hundred to a few thousand acres.

The bank’s size also offers the opportunity for significant ancillary benefits besides those of wetland preservation: it’s designed to protect a river corridor, preserve an essential migratory bird flyway, and provide a protected wildlife corridor to trigger reintroduction of endangered Louisiana black bears.

“The power of this bank is its sheer scale,” says Larry Selzer, president of the nonprofit Conservation Fund, which spearheaded the deal.

It would be hard to overstate the beauty of the Piney Woods region. Magnolia, dogwoods, sweet gum, oaks and mammoth bald cypress trees provide a lush shade garden where warblers and red-cockaded woodpeckers chatter and river otters and paddlefish splash in wetlands below.

It would also be hard to overstate this land’s precarious but significant ecological value. The Pineywoods Bank contains the last contiguous piece of bottomland hardwood systems in Texas and is home to over 1000 species of plants, birds, reptiles and mammals.

These bottomland hardwood systems are among the most diverse ecosystems in Texas and the most endangered in the United States, according to WWF, the global conservation organization. A Texas Parks and Wildlife study says they are disappearing at a rate of about 12 percent per decade, and only one-third of the systems that dotted the Texas coast during the days of legendary frontiersman Davey Crocket still exist today.

Moreover, the Pineywoods corridor provides a critical flyway for hundreds of species of birds during their biannual north-south migration, according to data from the Texas Center for Environmental Studies. And because the corridor includes no highways, no blacktops, and no bridges, it offers an opportunity to reintroduce the critically endangered black bear to forests that they once called home.

Bankers to the Rescue

The mandate to protect valuable but rapidly-disappearing wetlands began when the federal government passed the Clean Water Act in 1972, demanding that no new wetlands be destroyed unless an equivalent number of wetlands were created, enhanced, or restored.

But in Texas, where big money rides on development and cowboys and oilmen hold little countenance for government regulation, few government dollars flow towards any type of land preservation. Texas ranks forty-fifth among the 50 United States for per capita preservation of open space, according to Texas Parks and Wildlife statistics.

So the Pineywoods Mitigation Bank galloped to Nature’s rescue, pulling private industry into the environmental-preservation business.

By creating a viable business plan to conserve the land in perpetuity, the Pineywoods Bank pushes back against intense pressures to develop the land or build dams and reservoirs that would turn the wetland into a large pond and rob it of its ecosystem services.

Instead, developers building on wetlands in or near this watershed now have the option of buying credits, or shares in the Conservation Fund’s mitigation bank to offset the ecological damage the developers cause.

Switching from Paper to Wetlands Bank

For nearly a century, International Paper, the largest pulp and paper company in the world, dominated Pineywoods. The company approached the Conservation Fund five years ago when it decided to leave the US, Seltzer said. By then, the Conservation Fund and its partners had already protected more than six million acres of wildlife habitat throughout the nation, says spokesperson Vanessa Vaughan.

To cover the expense, the Conservation Fund decided to build a wetland mitigation bank, selling shares in it to pay for its enhancement and preservation. The Houston Endowment, TLL Temple Foundation and the Meadows Foundation philanthropic organizations provided significant investments in the venture, Vaughan says. And the Conservation Fund partnered with a timber investment management organization, the majority investor who asked to remain anonymous.

By this point, International Paper had cleared much of the forest, replacing diverse plant life with a monoculture of pine trees farmed for paper and wood. Although this reduced the forest’s plant and animal diversity, scientific measurements indicate that it had minimal impact on the strength of the wetlands.

This bodes well for the bank’s environmental success. J. Grant Barber, the senior scientist with PBS&J, a consulting firm working with the Conservation Fund on this project, reported that the 19,000-acre wetland was measured for its existing ability to fulfill the essential wetlands functions of restoring and retaining surface water, maintaining a plant and animal community, and removing and sequestering elements and compounds. The unrestored land received overall scores ranging from 75 to 93 percent success.

Moreover, the site included all the attributes that wetland expert Joy Zedler, chair of Restoration Ecology at the University of Wisconsin and co-author of a study on wetland-mitigation banking in 2001, says are essential to the success of wetland enhancement projects. The Pineywoods wetlands are surrounded by larger natural wetlands, have relatively intact topography and have not been severely contaminated.

Meanwhile, the bank’s potential for profit is dizzying. For an approximately $20 million investment, the Conservation Fund and its majority partner stand to make $79 million within the next few years – and more after that.

The math is simple. In terms of expenses, the partners purchased the $19,000-acre bank for $15.25 million, Vaughan says. They expect to spend $750,000 per year for the next seven years, or a total of $5.25 million, to restore and enhance the wetland, removing invasive species such as the Chinese tallow tree and planting indigenous vegetation.

In terms of income, the bank received approval from the US Army Corps of Engineers that oversees wetland mitigation banks to sell 5,300 wetland credits at prices ranging from $12,500-$18,000, depending on the quantity purchased, totaling approximately $79 million. And that is not the end of the windfall. The bank will be monitored and evaluated again in the year 2010. If all goes according to the Fund’s plans, they will receive authorization to release and sell more credits, Vaughan said.

The unnamed majority partner – who has a 70-percent interest – will pocket his profit, and the Conservation Fund will reinvest capital gains into new environmental projects elsewhere Vaughan says. To protect the Pineywoods area in perpetuity, the land will be turned over to the Texas Land Conservancy, a private land trust dedicated to conserving state land. The Conservancy holds an easement on the land and ultimately plans to turn it over to the Texas Parks and Wildlife Department for its long-term preservation, according to Texas Land Conservancy executive director Mark Steinbach.

Of course, as with most investments, there is risk. The main one here could involve who will purchase the credits.

The wetland bank is authorized to sell credits to private, industrial or government developers whose projects impact the Neches River basin and certain surrounding watersheds. Initially, the Bank’s partners expected to sell credits to the State Highway Department, which planned for years to expand a local highway. This would require them to purchase mitigation bank credits to compensate for wetland damage the new highway would cause, says Andy Jones, Texas director of the Conservation Fund. But the Highway Department delayed its highway-building plans.

The Bank next turned to the booming oil and gas industries, which were building pipelines that, by virtue of their straight paths, would inevitably encroach on wetlands and require compensation.

But oil prices have nosedived since September, when the bank received approval to sell its mitigation credits. This could mean fewer pipelines installed and fewer credits purchased as compensation.

Greater Than the Sum of its Parts

Investors say they consider the risk minimal when compared to the potential reward.

“This is great business solution to conservation needs at a critical time,” Barber says.

The Pineywoods Mitigation Bank, he adds, should generate a windfall of benefits. It is slated to enhance wetlands that improve water quality, inhibit floods, promote biodiversity, preserve an entire bottomwood forest ecosystem and provide an essential wildlife corridor and offer recreation opportunities. Moreover, it will likely generate a great deal of money.

“When you put together a large project like this, it is far greater than the sum of its parts,” says Sheri Ford Lewin, president of the National Mitigation Banking Association.

Alice Kenny is a prize-winning science writer and a regular contributor to the Ecosystem Marketplace. She may be reached at
[email protected]