Hundreds of cities are struggling with stormwater runoff that backs up sewers and endangers water supplies.  Absorbant "green" sidewalks, roofs, and parking lots can take the load of ageing sewage systems, but those don’t come cheap.  The city of Philadelphia is experimenting with an innovative financing mechanism that can make the transition easier for all of us. 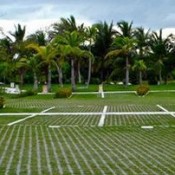 4 May 2012 | The University of Pennsylvania recently started saving $11,000-per-month on the fees it pays the Philadelphia Water Department (PWD) to handle stormwater runoff at its Philadelphia campus, but the city’s airport isn’t so lucky.   Its bill soared by $126,000 per month – all because the campus is covered in grass and the airport is covered in pavement.

The reason is simple: grass mops up rainwater, while pavement funnels it into the city’s ageing sewage system, where it mixes with shaving cream and other byproducts of human activity.   On particularly rainy days – which the city experiences about 85 per year – the sewers back up and the whole noxious concoction gushes into the Schuylkill River, bringing with it disease, stench, and unsightly gobs of goo.

So, what’s a cash-strapped city to do?

In a publication entitled “Rooftops to Rivers II”, the Natural Resources Defense Council (NRDC) outlines a slew of other solutions – from the creation of artifical wetlands to the installation of permeable sidewalks – that can reduce runoff and save the city billions over time.

Before those savings materialize, however, the projects have to be built, and the city came up with a simple way to simultaneously finance the development of new public infrastructure and incentivize a green retrofit among private landowners.

Specifically, it decided to change the way it assesses stormwater fees – which, for decades, had been based on water usage.

Problem solved, right?   Not quite.

Businesses with low water usage and big parking lots started receiving their new bills, and many accused the city of changing the rules in the middle of a game.

That made things easier, but it still left businesses out of pocket between the time they implemented the upgrade and the time they got the reprieve, so the city reached out to NRDC and EKO Asset Management Partners – both of which specialize in developing economic solutions to environmental problems, and each of which had helped develop financing mechanisms for clean energy programs.

They came up with several ideas.