US President Barack Obama vowed that the United States would receive 80 percent of its electricity from clean energy sources by 2035, and that one million electric cars would populate the country’s road by 2015 in Tuesday night’s State of the Union Address, but he embedded most environmental goals in economic terms. 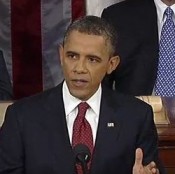 25 January 2012 | US President Barack Obama vowed that the United States would receive 80 percent of its electricity from clean energy sources by 2035, and that one million electric cars would populate the country’s road by 2015 in Tuesday night’s State of the Union Address, but he embedded most environmental goals in economic terms – continually emphasizing the economic benefits of a resilient environment while at the same time promising to open new territory to offshore drilling in an apparent effort to deflect Republican criticism over his Keystone XL.

As new drilling is opened, however, he promised tough environmental controls to reduce the risk of natural disasters.

“I’m requiring all companies that drill for gas on public lands to disclose the chemicals they use,” he said. “America will develop this resource without putting the health and safety of our citizens at risk.”

Despite those safeguards, his short-term policy of new drilling seems at odds with his long-term goals, according to The Nature Conservancy, which says the United States must eliminate more than half of its current fossil-fuel-based energy supply and replace it with renewable energy, new nuclear plants, and efficient natural gas of the 2035 target is to be achieved.

“Old and inefficient coal-fired generation would be the first to be retired,” wrote Bob Bendick, their Director of US Government Relations. “Gas may be seen as transitional fuel as we develop new technologies such as deep geothermal generation with even lower carbon emissions. Energy efficiency should also be given more importance in such an overall approach.”

Indeed, the President emphasized both natural gas and energy efficiency in his address.

“We have a supply of natural gas that can last America nearly one hundred years,” he said.   “My administration will take every possible action to safely develop this energy. Experts believe this will support more than 600,000 jobs by the end of the decade.”

He called on Congress to use tax credits to incentivize efficiency, but again emphasized the economic payoff.

“Energy bills (for factories) will be $100 billion lower over the next decade, and America will have less pollution, more manufacturing, and more jobs for construction workers who need them,” he said. “Send me a bill that creates these jobs.”

He also embedded systemic energy savings in a call to revive the nation’s crumbling infrastructure.

“We’ve got crumbling roads and bridges, a power grid that wastes too much energy,” he said, while making scant reference to climate change other than to warn that “the differences in this chamber may be too deep right now to pass a comprehensive plan to fight climate change.”

He did, however, emphasize the role that government can play in reducing the military’s carbon footprint, and in setting an example for the rest of the country.

“I’m directing my administration to allow the development of clean energy on enough public land to power three million homes,” he said.

The president also pushed back against critics of the Department of Energy’s loan to Solyndra, the California solar panel manufacturer that failed last year. Republicans such as Representative Cliff Stearns of Florida (who serves as chairman of the Energy and Commerce subcommittee) had lambasted the loan, which he said was being thrown away on a lost cause because “we can’t compete with China to make solar panels and wind turbines.”

While not mentioning Solyndra by name, the President made clear his belief that the US can compete in the solar sector, but must also accept the risks inherent in any new technology.

“Some technologies don’t pan out; some companies fail,” he said. “I will not cede the wind or solar or battery industry to China or Germany because we refuse to make the same commitment here.”

No More Subsidies for Big Oil

While vowing to subsidize green energy, he also called for an end to subsidies for oil companies – a call that also serves to remind critics on the right that green energy doesn’t have a monopoly on government subsidies.

“We have subsidized oil companies for a century,” he said. “That’s long enough.”

Instead, he said, the government should incentivize those sectors that will benefit the nation down the road, but aren’t profitable yet.