OTC volume of voluntary emission offsets nearly tripled in 2007, and Ecosystem Marketplace has once again teamed up with New Carbon Finance to crunch and analyze this fascinating market. The full report is now available for download. 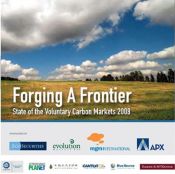 OTC volume of voluntary emission offsets nearly tripled in 2007, and Ecosystem Marketplace has once again teamed up with New Carbon Finance to crunch and analyze this fascinating market. The full report is now available for download.

Subtitled “Forging a Frontier” to highlight the emergence of more than twenty independent standards for verifying and validating voluntary offsets, this year’s State of the Voluntary Carbon Markets report has been compiled from 150 suppliers of carbon offsets, as well as registries and brokers.

This year’s survey identified several key trends in the voluntary carbon markets. Among the highlights:

• Ecosystem Marketplace and New Carbon Finance valued the international OTC market at $258 million in 2007. Together with the CCX, which was valued at $72 million, the global voluntary market was worth a total of $331 million in 2007. This more than triples the 2006 market value of $97 million.

• In the OTC market, energy efficiency, renewable energy, methane destruction, and forestry/land based projects were the most dominant project types in 2007.

• Buyers of voluntary credits tend to purchase offsets that most closely resemble those of the compliance market rather than indulge in the sort of experimentation and innovation that many believe the markets offer.

“We’re seeing significant growth, almost tripling in volume, as well as signs of maturation in the market, such as standards and registries,” explained Katherine Hamilton, an author of the report and Associate Director at Ecosystem Marketplace.

“According to our estimates, the market value has even grown stronger than absolute volumes as buyers are willing to pay more for their offsets. Relative to 2006 the market value has grown by 240%, which is significantly higher than even the regulated markets,” noted Milo Sjardin, Head of North American Operations at New Carbon Finance.

About the Voluntary Carbon Market

Environmentally-aware companies have been funding clean development projects to offset their CO2 emissions for two decades, and until the Kyoto Protocol came into force, such transactions were entered into voluntarily, rather than to comply with emerging mandatory cap-and-trade schemes. Since the advent of the Kyoto Protocol, the voluntary niche has served as testing ground for new technologies and methodologies.

Ecosystem Marketplace, a project of the non-profit Forest Trends, is a leading source of information on environmental markets and payment schemes for ecosystem services. In particular, we are interested in market-based approaches to the conservation of water-related ecosystem services, carbon sequestration, and the myriad benefits of biodiversity. Our publicly available information sources include annual reports, quantitative market tracking, weekly articles, daily news, and newsletters designed for different payments for environmental services stakeholders.

New Carbon Finance is the leading provider of information, analysis and insights into the North American, European and global carbon markets. New Carbon Finance constantly strives to provide the most accurate projections of future carbon market prices using proprietary fundamental analysis and models. The research underlying this report provides a crucial quantitative platform that will substantially enhance the understanding of the fast moving voluntary carbon market.

Offsetting Emissions: a Business Brief on the Voluntary Carbon Markets