Water brings life, but torrential downpours bring sludge and sewage overflow – contributing pollution around the world. In the United States, the Environmental Protection Agency is under pressure to regulate more aggressively, but, increasingly, NGOs and local authorities are moving ahead with cost-effective stormwater management plans of their own. 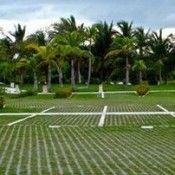 Water brings life, but torrential downpours bring sludge and sewage overflow – contributing pollution around the world. In the United States, the Environmental Protection Agency is under pressure to regulate more aggressively, but, increasingly, NGOs and local authorities are moving ahead with cost-effective stormwater management plans of their own.

20 April 2015 | Stormwater, the dirty water that flows off pavement, rooftops and other impervious surfaces, is one of the biggest sources of water pollution in the United States. The U.S. Environmental Protection Agency (EPA) is charged with managing this pollution, but the agency is failing to enforce its own rules, according to many environmental groups.

The Conservation Law Foundation (CLF) and the Natural Resources Defense Council (NRDC) are suing the EPA – in separate lawsuits – in relation to the agency’s enforcement of stormwater regulation and the effectiveness of those rules.

Such legal actions have traditionally been the main recourse for environmentalists looking to promote better management of stormwater runoff, but legal action alone often creates a situation where the party with the best lawyer wins – or at least the lawyers do. And the actual cost of compliance is seen as a fraction of the cost of litigation. For that reason, several environmental organizations have been bringing carrots to accompany their sticks.

The Voices of Opposition

Companies often equate the cost of compliance with the cost of construction or they view procedures to account for stormwater runoff flowing into waterways as an unknown – and frightening – liability. However, compliance costs make up a fraction of the overall cost of a development project, and Hammer argues that building things like permeable pavement, green roofs, and rain gardens – now called “green infrastructure” – saves companies money in the long run.

The stormwater rushing off impermeable surfaces dumps far more pollution into waterways than porous pavements that absorb and filter toxins. The result of these impervious areas is a contaminated pool of dirty water draining into rivers and streams, the CLF said in a statement speaking specifically about the Charles River watershed in Massachusetts. Gray infrastructure, then, equals a greater stormwater discharge cost for a property owner.

There is growing evidence supporting this concept that green infrastructure is in the business owners’ best interest. American Rivers, a conservation organization restoring US rivers, published a report in 2012 which found that these nature-based solutions can lower capital costs and operational expenses while increasing energy efficiency so energy costs are reduced. It also leads to an increase in property value and reduced costs associated with flooding.

And last year, the EPA projected a green infrastructure plan to manage stormwater for Lancaster, Pennsylvania could save the city $660,000 per year by lessening the treatment of wastewater. It also has the potential to deliver $4 million worth of energy, air quality and climate-related benefits.

But despite this mounting evidence on the benefits of green infrastructure, it isn’t typically incorporated into core business practices or investment strategies, a study by The Nature Conservancy, an environmental nonprofit, found. And as it stands, the key drivers for implementing green solutions are regulations. Brian Van Wye of the District of Columbia Department of the Environment (DDOE), notes how much farther along green programs with regulatory drivers are over the DDOE’s voluntary programs. “The regulated area is 10 times the size of the area that we’re able to touch with our voluntary programs,” he said.

But while the majority of businesses and places aren’t particularly supportive of nature-based solutions, there are a few areas where developers and local decision-makers are. A good example is Philadelphia, where the city’s water department has linked stormwater fees to the amount of impervious pavement on a property. More concrete means a higher bill.

The pricing structure incentivizes businesses to green their property and even includes a provision that allows property owners to write off their upgrade costs against future stormwater fees. However, that write-off could take years to materialize and doesn’t eliminate the upfront costs for companies.

Nonetheless, Philadelphia’s program spreads awareness on the importance of stormwater management, the lack of which Hammer called part of the problem. Developers aren’t aware of the benefits and don’t take advantage of the opportunities, she said.

Washington, D.C. is one city taking advantage of the opportunities. The city created the Stormwater Retention Credit (SRCs) trading program to provide flexibility in complying with new stormwater standards issued to D.C. through the EPA’s MS4 (Municipal Separate Storm Sewer System) permit. The program, which is the first stormwater retention trading program in the U.S., allows property owners to generate SRCs for voluntarily implementing green infrastructure that reduces stormwater runoff. They can then trade their SRCs with others needing to meet regulatory requirements.

Van Wye credits the “progressive-minded development community” as one of several reasons D.C.’s program has met with success thus far. The MS4 permit is also unique to D.C. in that the city receives clean water rules directly from the federal government while most U.S. cities typically receive these rules from their states. The DDOE was looking for the best methods to meet these new standards that dealt with stormwater retention in a way that was both effective and fair to the regulated group, Van Wye said.

“In terms of trading, we realized we could allow a lot of flexibility to development while at the same time generating as good or better benefits for the water bodies,” he said.

Like in Philadelphia, the D.C. program incentivizes property owners to upgrade gray infrastructure to green. And these property owners are eligible to receive discounts on their stormwater fees down the line. The trading aspect of D.C.’s program also creates a revenue stream that can lead to installing more green stormwater controls.

Last fall, the SRC program transacted its first trade – 11,013 SRCs worth $25,000. The seller of these credits was a property manager, Ann Benefield for condominiums in Northwest D.C. As the city’s first group of development projects becomes subject to the stricter stormwater regulations, program developers are expecting demand to emerge.

More Innovation on the Horizon

Ecosystem Marketplace’s latest State of Watershed Investments report also highlighted the potential of another innovative approach: public-private partnerships to harness finance for green infrastructure. The private partner provides upfront capital and assumes implementation and financial risks while the public participant funds the project over the long term and manages maintenance.

In the Chesapeake Bay, where regulation regarding stormwater controls is tightening, project developers expect these types of partnerships to leverage hundreds of millions of dollars in the coming decades. That money is much needed in a place where implementing necessary stormwater controls is estimated to be as high as $15 billion.

Projects like the Re.invest Initiative, partially funded by the Rockefeller Foundation, are encouraging these public-private partnerships as a means to build more sustainable stormwater systems. The project is a collaboration among eight U.S. cities – Honolulu, Milwaukee, New Orleans, El Paso, Hoboken, Miami Beach, Norfolk and Virginia Beach – and engineering, law and finance firms to create public-private partnerships that will build resilient infrastructure.

Innovative projects such as the Re.invest Initiative, along with what is being done in Philadelphia and Washington, D.C., are moving forward despite the legal entanglements and slowdowns at the federal level. Hammer emphasizes this progress in saying local governments can step up and enforce the type of standards NRDC would like to see at the national level.