National Geographic has long been in the business of creating what environmental economists call ‘existence value’ – getting people to care about the survival of places they know they will never visit in their lifetimes. Now, they’re using carbon offsets as part of their strategy to reduce operational emissions while investing in some of the gorgeous landscapes that appear in their pages. 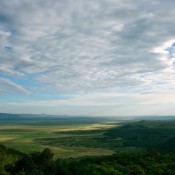 National Geographic has long been in the business of creating what environmental economists call ‘existence value’ – getting people to care about the survival of places they know they will never visit in their lifetimes. Now, they’re using carbon offsets as part of their strategy to reduce operational emissions while investing in some of the gorgeous landscapes that appear in their pages.

3 February 2014 | The National Geographic Society is perhaps best known for its magazine, which transports readers all over the world through stunning photographs. Its pages (both print and digital) offer glimpses of lions stalking their prey in the Serengeti, a crowded train car in Bangladesh, an ancient city in Myanmar seen from a hot-air balloon, or a 15-story iceberg in Iceland, quickly melting away. Though most readers will never visit these places, the photographs provide a vicarious vantage point and, in their own way, create value. This value is intrinsic, but it can also be translated into real dollars as people sign up for ecotourism tours or donate money for conservation or – as National Geographic hopes – pay a little more to help the organization go carbon neutral.

“Some people are not going to be comfortable using carbon offsets to counter their greenhouse gas emissions,” National Geographic’s Chief Sustainability Officer Hans Wegner admits. “But we feel they are a viable way to deal with those emissions we cannot eliminate in our operations. So long as they are third-party certified, audited, and properly accounted for, we consider them an important tool.”

National Geographic purchases carbon offsets to neutralize discrete aspects of its operations: offsets from a reforestation project in Panama cover emissions from natural gas use in its buildings; offsets from an avoided deforestation (REDD) project in Brazil cover emissions from business travel; and offsets from another REDD project in the Yaeda Valley of Tanzania cover emissions from its adventure travel operations in the area. Non-profit organizations overall made up less than one percent of the demand for forest carbon offsets in 2012, according to our 2013 State of the Forest Carbon Markets report, but well-known conservation organizations like National Geographic often ‘punch above their weight’ in terms of their visibility – and their influence on the marketplace.

Conservation organizations also tend to have a deeper understanding of the wide ecological benefits of forest conservation. Most of the projects National Geographic has supported through offset purchases have been forestry-based, perhaps because of the sustainability committee’s focus on co-benefits. Wegner is willing to pay slightly more for projects that sequester forest carbon while also expanding habitat for threatened species, both flora and fauna.

“The project in Panama that we purchased offsets from (for the natural gas use in our complex) comes close to meeting our dream of a two-fer or three-fer,” he says. “It is focused on restoring mixed forests of 30 indigenous species to 25,000 acres of what is currently cattle grazing land. This will add carbon sequestration capacity, but it will also expand the habitat for the ocelot and a regional species of spider monkeys, increasing their future viability in Panama.”

For its travel tours, National Geographic builds the cost of carbon offsets into the trip, therefore passing it on to customers. But for its other offset initiatives, the organization foots the bill itself. Wegner says this has not been a problem because the sustainability committee has so far saved much more than it has spent. The committee, formed in 2007, is quite grassroots: it is made up of a few dozen volunteers from within the organization who pursue sustainability goals on top of their ‘day jobs.’ Over the past decade, the committee led National Geographic to reduce electrical consumption by 16.7%, water usage by 35.8%, and natural gas usage by 17.4%.

The National Geographic Society’s Green Team is a group of volunteers from within the organization that has achieved a myriad of sustainability initiatives, from starting a Tuesday farmer’s market to completing a life cycle assessment of the magazine. The Chief Sustainability Office Hans Wegner (kneeling on left) is pushing towards carbon neutrality. Photo: Laura Wallach, National Geographic

Many of these reductions were achieved by plucking low-hanging fruit, such as shutting down boilers during off hours, closing buildings for 10 Fridays during the summer, and getting office supplies delivered once a week instead of on-demand. The Society has particularly focused on reducing its energy use over the past seven years. Initiatives to reduce the use of electricity and water have produced cost savings of between $550,000 and $600,000 per year. Cost   reductions like these make it easier to ‘sell’ the spend of   $54,000 last year on offsets (and another $70,000 on Renewable Energy Credits). When subtracted from the savings, the “cost of offsets could be considered to be free,” Wegner says.

The sustainability committee’s ultimate goal is to steer National Geographic towards carbon neutrality, and Wegner would prefer to do so entirely through direct reductions. But because the vast majority of National Geographic’s carbon dioxide (CO2) emissions (about 95% of them) are scope 3 emissions – the paper supply chain – addressing them requires getting suppliers to change practices. The organization is already engaging with suppliers on a quest to print on 100% certified fiber, working with landowners across the southwest U.S. to certify 10 million acres of forest by 2017. But reducing CO2 from the paper supply chain – from seedling to mill to printer – is difficult. For now, offsetting is a necessary part of the picture.

While the sustainability committee turns to offset purchases only when it “has no alternatives” for internal emissions reductions, Wegner makes clear that if National Geographic is going to offset, the organization is going to do it right. “I work really hard to make sure project developers give me all the particulars, and I send the documentation to Deloitte, who is our carbon auditor,” he says. “The last thing I want is for our organization, which has earned its credibility, to be seen as not acting credibly in this arena.”

National Geographic has worked with offset retailers Native Energy and CarbonFund to source projects, which they usually keep on the docket for two to three years. But the organization is open to new channels of finding projects. Wegner is excited about a participant in National Geographic’s Emerging Explorer program who suggested a forest recovery project around an endangered parrot. “If we can get a project like that certified, then we can invest our offset dollars in projects that are very ‘Nat Geo’ in nature,” Wegner says. “I would like to get to the point where our members can participate by promoting projects in the continents or countries where they live, so it makes it relevant for them.”

Part Three: DHL: Neutral If You Choose shows how an international logistics company engages customers around valuing emissions-free shipping – and why they’ve come around to forestry.