This month’s flooding along the Mississippi River has introduced the term spillway into common vernacular as more and more of these reservoirs are flooded to stave off disaster It wasn’t that long ago, however, that natural wetlands did what spillways do today and they did it better, cheaper, and with more style It’s time to bring some of them back, and mitigation banking can help. 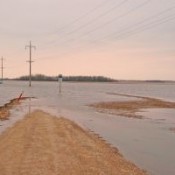 12 May 2011 | The Mississippi River spared Elvis Presley’s old haunts when it breached its banks at Memphis.

“Graceland is safe,” said Bob Nations Jr., director of the Shelby County Emergency Management Agency, in an interview with the Associated Press.

“We would charge hell with a water pistol to keep it that way,” he added, “And I’d be willing to lead the charge.”

Unfortunately, that won’t help all the farms and towns and businesses that were engulfed along the river’s 2000 miles.  Fixing them will cost billions of dollars – a sum that has already sparked outcry over the cost to taxpayers and the wisdom of building in floodplains.

Such critiques are well-taken, but they skirt the real lessons of this catastrophe: namely, that man is a part of nature; that nature delivers ecosystem services that support our economy in ways most of us take for granted; and that we’d all benefit from factoring the value of these services and the true cost of their degradation into our economic decisions.  Ecosystem markets can play a key role in helping us do that.

Wetlands, for example, aren’t just spillways that give water a place to go when the river bloats beyond its capacity.  These bogs and swamps also capture carbon, filter water, and provide shelter for migrating birds, baby fish, and other aquatic animals.  We’ve drained most of them over the past 150 years to make way for villages and farms – many of which are marginally productive and costly to maintain.

That cost, however, is often hidden – or passed on to people downstream – while the benefits are tangible and easy to identify.  That began to change in the second half of the last century, with the emergence of systems theory, ecological economics, and environmental finance.  One study published shortly before last year’s Deepwater Horizon debacle pegged the value of the Mississippi River Delta’s ecosystem services at between $330 billion and $1.3 trillion.

Flood a Farm or Feed a Wetland?

When the Army Corps of Engineers blew up man-made levees to save the town of Cairo, Illinois, they flooded low-lying farms with tons of sludge and sand, rendering them useless for years to come.  A wetland would have absorbed the deluge and then slowly released clean water back into the river – thus saving clean-up costs downstream and in the Gulf of Mexico.  Moreover, it would do this continuously over the decades, and not just during catastrophic years like the one we’re experiencing now.

To be fair, floods like this one would likely overwhelm even the most extensive natural wetland system, but that doesn’t change the fact that, over the long haul, much of the developed land along the Mississippi would be more valuable in its natural state.  As natural wetland, it would absorb water when the river bloats; then it would filter that water, sprout grasses, and feed bogs that capture carbon.  Some would argue that it would also be prettier to look at and certainly more fun to play in than it currently is.

In ecosystem service terms, this means it would provide “flood control”, “water filtration”, “carbon sequestration”, “scenic beauty”, and “recreation”.  All of these services have economic value, and the challenge now is not only to quantify that value, but to show people that it’s in their interest to pay for it.

The US Clean Water Act addressed that issue by placing tight controls on the destruction of wetlands and mandating that any new development lead to “no net loss” of important wetlands – usually interpreted to mean those that are part of a viable watershed system.  This provision for “no net loss” led to the practice of mitigation banking, which encourages developers to proactively rescue soggy farms and return them to their natural state in the hope of selling credits to nearby developers whose activities destroy or degrade wetlands.  The net result should, in theory, be a gradual restoration of those wetlands that deliver the most value.

Army Corps has the Right Idea

The Army Corps of Engineers issues the permits that govern mitigation banking, and this year it also aims to win approval for a new plan that would let more water go where it wants to go by promoting the use of natural floodplains.

“Whenever possible, the best way to manage floods is with a natural floodplain,” said Terrence “Rock” Salt, the US Army’s deputy assistant secretary overseeing the Corps of Engineers’ water-resource policy, in a Wall Street Journal story earlier this week.

The Corps has already begun to implement the plan, but bringing it to scale may require a new approach to mitigation banking – one based not on the foundation of “no net loss”, but instead based on the value of restored ecosystem services.

There’s plenty of evidence to support the contention that better land stewardship is, in the long term, more economical than the status quo; there are also scores of mechanisms for rewarding that stewardship. Fishermen in the Gulf of Mexico, for example, have suffered because fertilizers from farms all along the Mississippi River and its tributaries are accumulating there, and water trading programs are already underway that reward farmers who reduce the runoff into rivers, lakes, and streams.

Other emerging payment mechanisms promote the restoration not only of  wetlands, but also of forests and other living ecosystems, as well as habitat supporting endangered species, and then enticing those who either benefit from these services or contribute to their destruction to instead pay for their upkeep.

These mechanisms promote healthy rivers, streams, and lakes by creating a financial incentive for practicing good stewardship of the watershed surrounding them.

The City of New York offers a prime example.  Faced with the prospect of spending nearly $10 billion on a new filtration plant or paying landowners in the surrounding Catskill Mountains to maintain the watershed, they chose to pay the landowners.  The experiment has saved the city billions, and in the process yielded lessons for similar programs now being implemented across Latin America, Africa, and Asia.

Where Does the Money Come From?

Mitigation banking is driven by private demand for restoration.  It exists outside the sphere of federal or non-profit grant funding, and is a cost of doing business for developers.  As a result, it only happens where houses, roads, and factories are being built.

But our nation’s green infrastructure – like its built infrastructure – is suffering even in places where no new development is underway. Indeed, some of the places most in need of green restoration are those where new development is receding, and much of the flooding taking place along the Mississippi stems from a lack of ecosystem services upstream. What’s more, some of the worst flooding is taking place in tributaries far removed from the Mississippi itself, in drained marshes that could prove prime for wetland development.

Becca Madsen is the Biodiversity Program Manager at Ecosystem Marketplace.  She may be reached at [email protected].