The Brazilian state of Acre has built a comprehensive legal framework to support good land stewardship through payments for ecosystem services (PES). Now they’ve primed the pump with 6.5 million Reais ($2.9 million) to help indigenous people get their PES programs off the ground. More than half of that has already been delivered, and indigenous leaders say they can’t wait to get started. 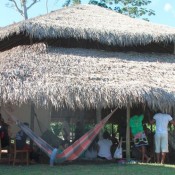 6 May 2014 | Chief Tojtxi never forgot his first, furtive contact with the invaders.

“We saw traces of the whites, and fled  into the forest,” he told Survival International a few years back.  “The whites saw our footsteps and followed us. We went further and further away, but the whites came to our village, and we left our plantations,  our caxiri (manioc drink), and everything, to flee.”

He was chief of the Arara, an isolated people of the Amazon Rainforest who had their first contact with Brazilian authorities less than 35 years ago. The “plantations” he described were temporary agricultural plots that the Arara borrowed from the forest for a few years at a time before letting them return to their natural state. It’s one of the many ways they adapted to the notoriously poor soil of the Amazon, and it served the Arara well for hundreds (and maybe thousands) of years. But the practice went into sharp decline after the Arara made contact with Brazilian authorities in 1981, and much of their forest fell to ranchers, loggers, and others bearering short-term prosperity at the expense of the land’s long-term viability.

The Brazilian state of Acre is now trying to help the land recover, in part through its  System of Incentives for Environmental Services  (Sistema de Incentivos a Serviços Ambientais  / “SISA”), which aims to revive land-use activities that were common in Tojtxi’s day.

Launched in 2010,  SISA creates a framework within which indigenous people, rubber tappers, and small farmers can earn Payments for Environmental Services (PES) by practicing sustainable agriculture and protecting endangered rainforest. For indigenous people, SISA explicitly aims to support traditional methods of farming and forest management that have proven to be more suitable for the rainforest than are the western methods brought by the newcomers. So far this year, the indigenous component has received  R$6.5 million ($2.9 million) in jump-start funding, and current Arara chief José Maria Arara says that’s critical to moving his people forward.

“No one today lives without money,”  he said at a SISA workshop in November. “Anyone who tells you differently is lying. It even cost money for me to come here.”


Click here to learn more about SISA and its institutions.

The workshop was one of several that environmental non-profit Forest Trends (publisher of Ecosystem Marketplace) held for indigenous people since SISA passed in 2010. By late 2013, José Maria and the other indigenous participants were tired of talking and ready to get to work.

Members of the Ashaninka People take stock of their natural capital at a workshop in their territory.
Photo Credit: Flavia Cunha

The new funding provides a partial answer, and it comes in two waves.

The first wave came in January, when the state paid R$3.6 million ($1.6 million) to the Acre Association of Indigenous Agroforestry Agents (Associaçí£o do Movimento dos Agentes Agroflorestais Indí­genas do Acre/AMAAIAC). The second wave came in April, when the state put up an additional R$3 million ($1.34 million) for individual indigenous projects. That money has been allocated, but will be awarded over the next two years.

It’s all part of a R$50 million ($24.2 million) grant that KfW, the German development bank is providing through 2018. Seventy percent of that is earmarked for providers of environmental services, including rubber-tappers and indigenous groups. It marks the German government’s first grant specifically to a state rather than to a country.

Much of the funding will come into Acre in the form of performance-based REDD+ (Reduced Emissions from Deforestation and forest Degradation) payments designed to help the state reduce its overall rates of deforestation, and the state government believes the best way to achieve that goal is to support indigenous people and traditional management systems.

The AMAAIAC program is designed to reverse decades of degradation caused by the shift from forestry to cattle farming and other practices that destroy the forest. The money is earmarked to help AMAAIAC develop indigenous land-use practices that protect fragile forests.

“PES is difficult to understand, but it is not rocket science,” said Charamaxa Huni Kuin of the Huni Kuin people. “These are the things that indigenous agroforestry agents have been doing, and the work is getting stronger.”

Phase Two: REDD+ and Other PES

The second tranche is more complex, because most of Acre’s indigenous territories remain isolated and face low risk for deforestation. That makes them unsuitable for carbon projects based on the classic REDD mechanism. Here, indigenous impacts can more accurately be measured in terms of habitat conservation and water management, with carbon stocks  being a byproduct. SISA, in this case, acts as a conduit between international REDD+ payments and indigenous-run programs that deliver other environmental benefits.

“International REDD+ payments come into the state denominated in carbon, but the state distributes the money internally via payments for watershed services, payments for habitat restoration, and payments for any number of other actions that are consistent with SISA,” says Rebecca Anzueto, a Program Manager with the Communities and Markets Initiative at Forest Trends (publisher of Ecosystem Marketplace). “As long as the state meets its REDD+ emissions-reduction targets, the REDD+ payments should continue to flow.”

Members of the Yawanawa People at a SISA
workshop in their territory.
Photo: Laura and Tashka Yawanawa

This year’s awards will go to projects that support Indigenous Territorial Management Plans consistent with the federal  Plano de Gestí£o Territorial e Ambiental de Terras Indí­genas (PGTI). Such territorial management plans are often termed “Life Plans” and are long-term development strategies that indigenous people across the Amazon are creating in an effort to maintain their indigenous cultures, improve their livelihoods and conserve their forests. They are a key component of SISA and draw on other successes, such as that of the Paiter-Surui in leveraging their 50-Year Plan to create new development programs, including the first-ever indigenous-led REDD project, which led to an historic partnership with Brazilian cosmetics giant Natura.

The awards will range in size from R$50,000 ($22,390) to R$210,000 ($94,000) and can be used for a broad range of activities – from strengthening land management to promoting associations and communities to generating income for women. The final projects will be selected by the government according to a criteria established by SISA’s Indigenous Working Group (GT-Indí­gena).

“GT-Indí­gena was created to guide the implementation of the indigenous component of SISA, to figure out, for instance,how to distribute funds and other benefits to local indigenous communities – to answer questions like, ‘How will money strengthen land tenure rights? How will this money strengthen the management and governance of territories that have been demarcated?’” says Beto Borges, who heads the Forest Trends Communities and Markets Initiative and sits on GT-Indí­gena.

“We’re talking about 2.4 million hectares of forest being managed by indigenous peoples,” he says. “That’s 15 distinct ethnicities dispersed among 35 indigenous territories. Their traditional territories have been demarcated. They’re official. Now, the new funding from SISA will strengthen the management and conservation of their forests.”

Kelley Hamrick is a Research Assistant in Ecosystem Marketplace’s Carbon Program. She can be reached at KHamrick@ecosystemarketplace.com.