The science on climate change is alarming and robust, but the investment community has virtually ignored it. The American Meteorological Society is one of many organizations looking to change that – most recently with a new study built on input from scores of scientists and leaders from the investment and risk management communities. Here’s what they are telling us. 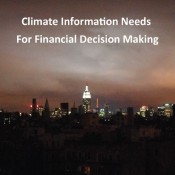 The science on climate change is alarming and robust, but the investment community has virtually ignored it. The American Meteorological Society is one of many organizations looking to change that – most recently with a new study built on input from scores of scientists and leaders from the investment and risk management communities. Here’s what they are telling us.

8 January 2014 | The recent cold snap may have cost the US economy $5 billion in just two days as millions of workers were unable to reach their jobs and nearly 7,000 airline flights were cancelled. In the longer term, extreme weather events from climate change are projected to cost trillions in the critical agriculture sector alone.

But when reporters try to translate the science into actionable information, the news inevitably comes out sideways – mostly because it’s not always clear how developments that are certain – such as climate-change itself – will manifest locally in terms of precipitation and temperature or specific droughts and floods.

Last June, the American Meteorological Society held a workshop in Washington, DC, designed to explore ways of bridging the gap between the scientific and investment communities. This week, they published the results of that workshop in a report called Climate Information Needs for Financial Decision Making.

The report begins by recommending that scientists categorize their findings by certainty – specifically, by making it more clear which projections are “possible” (meaning of an unknown likelihood or less than a 50% probability of happening), which are “probable” (meaning more than 50% likely to happen), and which are “effectively certain” (meaning at least a 95% probability of happening).

The report then goes on to identify several areas that have at least a 95% certainty level – namely, that climate-change is happening and man is the cause, that this will alter weather patterns and cause massive shifts in agriculture.

Beyond that, the report lays out eight steps for developing new mechanisms to promote collaboration between the scientific community and financial decision makers.

“Effective partnerships and strong relationships would enable the scientific community to understand financial decision makers’ needs and promote understanding of the potential (and limits) of scientific understanding,” the report says. “The coproduction of knowledge — active collaboration of the research and user communities in the research process — also has potential to enhance the creation, communication, and use of scientific information.”