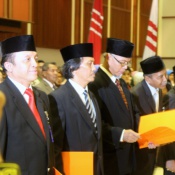 This article was originally posted on Mongabay.

10 June 2015 | “I think the transition period of the last six months has been quite heavy,” the minister, Siti Nurbaya, said at the inauguration event in Jakarta on Friday. “We persevered through a difficult time,” she added.

Earlier this year, Jokowi dissolved BP REDD+ to streamline the government, though some activists and officials have criticized the move, fearing Indonesia’s conservation agenda will languish under the weight of the ministry’s bureaucracy.

BP REDD+ was the world’s first cabinet-level institution dedicated to implementing REDD+, which refers to the global Reducing Emissions from Deforestation and Forest Degradation mechanism.

Nur’s appointment “effectively confirms that the entire climate change agenda will be managed by the Directorate-General of Climate Change Oversight,” Siti said at the inauguration.

The new department will handle climate change adaptation and mitigation; measuring, reporting and verification of progress; and forest fire control, according to the minister.

To preserve the institutional independence and objectivity of Indonesia’s cooperation with Norway, under which BP REDD+ was established in 2013, the ministry will establish a Steering Committee on Climate Change, led by Sarwono Kusumaatmadja, an environment minister during Suharto’s New Order regime. The committee will also include NGO representatives, other senior bureaucrats and foreign technical experts.

As head of the Social Forestry and Environmental Partnerships Directorate-General, Daryanto is in charge of realizing Jokowi’s promise to allocate 12.5 hectares to “social forestry” or “community-based forestry” schemes, which put land management in indigenous and local communities’ hands through community logging, village forest and other arrangements.

The new director-generals line up at their inauguration last week. Photo: Sapariah Saturi

Greenpeace forest campaigner Bustar Mitar noted that most of the appointees were old faces from the Forestry Ministry, and he urged them not to operate in the “old style.” In 2012, Indonesia’s Corruption Eradication Commission (KPK) named the Forestry Ministry one of the country’s most corrupt institutions.

“This is not a sign of change,” Noer said.

“If the attitude is still toward centralized and elitist decisionmaking that is not open to the people’s participation, these changes won’t mean anything,” he added.