Palm oil is a natural biofuel that also supports the economies of several developing nations, but growing it means chopping down the rainforests. That also means more carbon in the atmosphere, more global warming, and less habitat for countless endangered species. Now an innovative project in the Malaysian state of Sabah is betting that endangered species are worth more than palm. 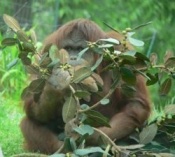 30 September 2008 | The Eden of South East Asia, Malaysia’s Sabah State provides refuge for one of the most intelligent animals after man: orangutans, as well as an assortment of other unique and critically endangered species. Its tropical rainforests grow lush with palm-oil plants, one of the most versatile forms of vegetation on earth. And its government, celebrating the land’s fertility, brags that its citizens enjoy one of the developing world’s highest per capita incomes ($14,400 per year) in what is an otherwise largely impoverished region.

But as another resident of Eden, the biblical Eve, found, balancing a paradise’s temptations can be tough. Malaysia’s bounty comes bedecked with inherent conflicts that pump up one asset to the demise of others.

More pressing still, these plantations have already destroyed essential refuge for the orangutan, man’s closest mammal cousin. United Nations experts say that if nothing is done, these and other critically endangered species could disappear entirely within the decade.

The Value of Nature

Sensitive both to their bounty’s precariousness and to threats of boycott from environmentalists, the Sabah State Government sought alternative revenue streams to logging and palm oil plantations, and one option was to sell development rights on the carbon credit market. But this would not restore habitat nor necessarily protect the orangutan and his fellow endangered species.

Moreover, as Harvard University environmental science professor and environmental trading guru John Holdren says, “valuing forests only for their carbon is like valuing a computer solely for its silicon.”

So the government teamed up with Eco Products Fund, a private equity investment vehicle jointly managed by New Forests Inc. and Equator Environmental, LLC to test-run an innovative ecosystem banking plan they project will protect these endangered mammals while depositing funds into state coffers.

Specifically, the state banned the multi-billion dollar moneymakers of logging and oil palm plantations within its 80,000-acre Malua Forest Reserve. This area, roughly the size of Detroit, Michigan, is composed of totally logged, partially logged and completely preserved rainforest. And it launched the first-ever tropical rainforest conservation bank last month, a distant cousin to conservation banks that have sprung up over the past decade in the United States, making investing in endangered-species protection a potentially big money maker for the savvy green investor.

“Whenever someone’s willing to spend money to protect nature, it’s worth working with them to try to make it real,” said Bruce Hamilton, deputy executive director and climate adaptation specialist for the Sierra Club.

But Hamilton and others express concern that shortcomings in analyses and accountability that plague other environmental markets could undercut this new market as well.

The Superman of Veggie Oils

Closing the door on new palm oil plantations and logging propositions takes guts, most financial experts agree. The palm oil plant’s potential appears almost magical, making it the most productive oil seed in the world. Palm oil plants that were first imported into Malaysia in 1910 today provide more than half the world’s crop, according to the Malaysian Palm Oil Association. They are Malaysia’s leading agriculture export and its major generator of foreign exchange.

Versatile and cheap, palm oil is used in ten percent of all supermarket products – from chocolate to toothpaste to soaps. Multiplying this commodity’s rock-star status, palm yields nearly ten times as much crude oil per cultivated acre as its closest competitors, soybeans and corn.

The problem is that oil palm plantations have destroyed nearly fifteen thousand squares miles of Malaysia’s rainforests, an area roughly equivalent to the entire nation of Denmark or the states of New Jersey and Massachusetts combined. Rainforest loss, as most people who follow the carbon market already know, is bad news for global warming.

It’s also bad news for orangutans, balding beasts bedecked with tufts of reddish-brown fur that make tools such as leaf umbrellas, communicate through high-pitched howls and nurture their children nearly into adolescence. The world’s last intact population of orangutans has hung on so far in the land where the biobank is planned. But to survive long term, they need an expansive, connected canopy of rope vines and tree tops.

Palm plantations here also acted as death warrants for critically endangered Borneo pygmy elephants, gibbons, clouded leopards and hundreds of species of birds. And they have decimated the Sumatran Rhino; two of the remaining 40 Sumatran Rhino on the planet struggle to survive on land owned by the future Malua BioBank.

Investor insiders say that, from a financial perspective, the venture is high-risk, high reward. A $10 million investment is slated to return $36 million. Investors, who New Forests Director Radha Kuppalli said asked to remain anonymous, will reap this windfall within six years. But first, the conservation bank will use their investment to protect and restore habitat and maintain it in this condition for 50 years.

To recoup its money, the bank divides the land into 100-square meter plots, selling interest in each restored plot as a “biodiversity credit.” The typical credit buyers are expected to be companies that use palm oil in their products, including soap and biofuel producers, Kuppalli said from her Washington D.C. office. She declined to name names since the Bank is in the midst of negotiations.

Unlike typical environmental markets including conservation markets in the United States that serve as a partial model for the Malua BioBank, the credits will not serve as offsets for palm oil produced elsewhere. Instead, they assign a value to environmentally friendly conservation and may green-up purchasers’ reputations.

Scientists and environmentalists not involved in the deal said they felt encouraged that Malaysia, a nation that has supported its rainforests’ conversion to palm oil plantations and appeared to ignore the issue of illegal logging, may now be moving towards conservation. But many expressed skepticism about a deal drawn between a government with this history and private investors intent on making a profit.

Quantitative ecologist Dr. Robert Wagner, a consultant for conservation banks in the United States, cautioned that the “whole plan needs to be laid out so everyone’s aware of what the deal is.”

But the deal is difficult to completely assess because much still needs to be determined. Its conservation management plan already contains concrete requirements such as destroying creeping vines that choke the forest, replanting trees, building nests and creating rope bridges that enable orangutans to travel from treetop to tree top. Moreover, progress against key management goals and priority actions outlined in the conservation management plan will be reviewed annually by a steering committee composed of members of the Sabha government. and Malua biobank and by an advisory board composed of local and international NGOs and scientists, spokespersons say. If the agreement is breached, it contains stiff financial penalties against the government.

But because restoring rainforests for animal conservation is novel here, the BioBank describes its conservation plan as a “living document” that provides flexibility to react to unanticipated demands.

Still, one man’s flexibility is another man’s lack of accountability.

Dr. David Wilcove, a Princeton University biologist who specializes in endangered species in Malaysia, said he hoped this type of innovative partnership could reduce the worst outcomes for biodiversity that he has been tracking. But past precedent left him concerned, he said, that credit for this project could provide cover that wouldallow the Malaysian government and palm oil producers to destroy habitat elsewhere.

If additional rainforests are being cleared outside the Malua BioBank for palm plantations, other endangered species will likely be impacted. In carbon language, protecting one area at the expense of another is referred to as “leakage.”

Shouting to be heard as he got off a San Francisco subway while on a short vacation, Wilcove said that “you’re not being terribly green if on the right hand you support a forest restoration project while on the left hand you support conversion of a forest somewhere else.”

Moreover, unlike conservation banks in the United States that set up non-wasting endowments to protect land and species in perpetuity, Malua has a nonwasting endowment – equal to 20 % of sales revenue from biodiversity certificates – that can be used to pay for conservation and ongoing protection for the initial 50 years.

At the end of the 50 years when the endowment is fully capitalized, it could be used to renew the conservation lease. While the government is not required to renew this lease, if the endowment is sufficient to provide competitive fees as its sponsors expect, it could continuing protecting the land. Moreover, if the area is no longer at risk, the money could be moved to other critical conservation areas to initiate the protection process again.

From one perspective, Malaysia’s recent actions offer reassurance that these uncertainties should not necessarily cause concern. The nation agreed last year to prohibit logging, and in June it announced a prohibition against further clearing of forest reserves for oil palm plantations. Only areas zoned for agriculture would be allowed to be converted for palm oil production.

But opponents point to export statistics that appear to belie the government’s earnestness. Just this month, Malaysia announced that palm oil exports rose 77 percent in value from the year earlier. The increase comes partly from higher prices responding to increased demand and partly from increased production either within or outside of forest preserves.

It’s Not Easy Being Green

Perhaps more than any other country, Malaysia demonstrates the difficulty of finding valid green solutions in a green cash world.

Kuppalli has personally observed orangutans in Sabah and assessed their habitat’s destruction and planned for their protection. She points out that “Malua is a globally unique forest. We can’t spend twenty years coming up with a (perfectly quantified) model…because the forest would be logged off and the animals would be long gone by then.”

There is no time left for holding hands and singing Kumbaya. If nothing is done, experts agree, the orangutan, or “man of the forest,” as well as several other beloved but endangered species could disappear completely within the next few years.

The issue, Kuppalli said, is “whether the world is ready to be optimistic, think differently about conservation and give innovative forestry projects a chance.”

NOTE: The story was slightly edited on October 10, when two sentences were added to provide more detail on the non-wasting endowment and the steering committee’s role in maintaining the integrity of the project.