Smallholder farmers provide roughly 40% of the world’s agricultural commodities, but circumstances often force them to farm aggressively and unsustainably. In 2011, we wrote about a groundbreaking effort to change that by tapping carbon markets to help small farmers become more sustainable. Then, in 2016, we visited the program and incorporated this 2011 story into a series on Kenya’s agroforestry revolution. 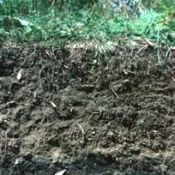 14 December 2011 | David Ongoro has been working his three-hectare farm in Kenya’s fertile Nyanza Province for over a decade, and for the past two years he’s been enjoying bumper crops.   He attributes that to a local forester named Danish Juma, who told him he could earn carbon credits for shifting to something called “climate safe” agriculture.

Ongoro jumped at the chance – but not for the carbon credits.

“I’m a farmer,” he says, “and the most important thing for me is what I get from my farm – the outputs.”

It turns out those outputs respond to the same activities that reduce carbon emissions – a happy correlation that sparked a 20-year experiment called the Kenya Agricultural Carbon Project (KACP), which aims to test the role carbon finance can play in persuading small-scale farmers to adopt more sustainable practices.

The KACP was developed by the VI Agroforestry Programme, a Swedish NGO that has been planting trees in Eastern Africa since 1983, and is being funded by the World Bank. Juma signed on as a field officer two years ago, and his mission ever since has been to recruit and train farmers like Ongoro.   His pitch is simple: sustainable agriculture can raise your yields, and it also locks carbon in the ground – which means you might earn carbon credits down the road.

Ongoro and 15,000 other farmers joined the project and have ratcheted up their outputs – perhaps as much as 30%, although an exact figure is still a few years off.

“The yields are definitely up, but we don’t know the exact amount yet,” says Bo Lager, who runs the project for VI Agroforestry. “We also can’t say with certainty how much of that increase can be attributed to the new practices, and how much is just normal fluctuation.”

The “new” practices are really a combination of old and new technologies called sustainable agricultural land management (SALM), which were developed not to capture carbon, but to conserve topsoil.

Healthy topsoil teems with life, and that means carbon.   As we churn through topsoil, we not only extract the nutrients that support agriculture, but we release carbon into the air – lots of it: roughly 80 billion tons since the advent of mechanized tilling 200 years ago.   SALM reverses this in two ways: first, by increasing yields, which captures carbon in plants; and second, by avoiding soil disruption, which keeps carbon locked in the soil.

Efforts are underway to bring 50,000 more farmers into KACP, which aims to generate carbon credits for another 20 years.   Money will be used to train farmers in SALM while helping them adapt to climate change and commercialize their crops.

Ongoro says the practices are fairly simple, but also labor-intensive.

“I’ve learned to do crop rotation now, which I wasn’t doing before, and I use manure along with industrial fertilizers,” he says.   “I also don’t remove residues – that’s the left over stuff after a harvest – but rather compost it.”

And, instead of digging up long rows of dirt to plant his seeds, he employs “no-till farming”, which is practiced on 40% of US farms.   It’s credited with halting the depletion of topsoil there and locking an estimated 60 million metric tons of carbon in the ground annually.

Such practices could go a long away in Africa, where agricultural greenhouse gas emissions are projected to skyrocket as the population grows and the diet shifts. Already, 66% of the continent’s cropland has been severely degraded, which leads to more deforestation as farmers move on to more fertile land.

The series of articles has a companion series on the Bionic Planet podcast, also called “Of Milk and Money”. The podcasts echo the articles, but the two mediums are different, and they don’t always match up exactly. To get the full story, be sure to subscribe on iTunes, TuneIn, or wherever you access podcasts – or click below to hear the first installment on this device:

The Role of Carbon

The KACP has yielded intriguing insights into the supporting role that carbon finance can play in helping to alleviate those emissions.

“A farmer who joins this program will benefit through improved production, improved nutrition, and increased income from agricultural activities,” says Juma. “That’s the benefit; carbon should be viewed as a bonus.”

And there’s the rub: carbon is likely to deliver a small bonus at best, because SALM locks up just one or two tons of carbon per hectare per year.   Ongoro’s three hectares might earn just $15 per year in carbon credits at today’s prices, with much of that going to cover the KACP’s administrative costs.   What’s left will be distributed to the farmer’s cooperative that Danish belongs to, and no one really knows how much that will be.

Lager says that KACP’s costs are fixed, which means that the higher the price of carbon goes, the more he can disperse to farmers’ cooperatives.   If prices stay at today’s levels, farmers won’t earn much directly from the credits, but will receive decades of training and adaptation support.

Carbon income, therefore, may best be used to support education, outreach, and organization – activities that promote the transition to a more sustainable economy – with farmers reaping the benefit of higher yields.

“You could make that argument,” says Lager.   “But we still plan to give most of the money to farmers’ groups.”

The program won’t work everywhere, in part because it’s not clear how much of Africa’s soils are well-suited for soil carbon projects. Research done by the Terrestrial Carbon Group, for example, found that only two African countries – South Africa and Congo – offer a high potential of soil carbon sequestration. Soil specialist and retired Duke University professor William Schlesinger says that peatlands, wetlands and cold regions are, in general, better places for locking up significant amounts of carbon in soils.

“Since soil carbon contents are driven more by decomposition rates than input rates, hot areas and deserts simply do not store as much carbon,” he says, adding that the best road to sequester carbon in soils in Africa would be to focus on incorporating crop residues or their ash into soils, where this has not been done traditionally.

Which brings us to the question of how to measure changes in carbon stocks. Releasing carbon from soils takes much longer than from trees and sequestering is a much longer process as well.

“Measuring and validating an estimate of soil carbon over any considerable area is a non-trivial amount of work due to the high degree of spatial variation in soil characteristics and the relatively small changes in the carbon content that will be seen on an annual basis,” says Schlesinger, adding that modeling cannot replace field surveys because the models are too dependent on the parameter estimates that drive them.

The KACP is dealing with that by monitoring behavior instead of trying to measure carbon, and then knocking 60% off its estimated total.

KACP is the first project to earn soil carbon credits, but other projects are underway across Africa.   Ecosystem Marketplace publisher Forest Trends, for example, is working with Ecoagriculture Partners and Climate Focus on the African Agricultural Carbon Facility, which aims to test the viability of such mechanisms in coffee systems.

Coffee growing has significant carbon sequestration potential, and this initiative essentially focuses on converting sun-grown coffee into a shade-grown version with an increase in tree cover and a composting component. Researchers estimate this method of farming can store an additional 1.8 tCO2/ha/year.

In other words, converting sun-grown into shade-grown coffee, represents a promising commodity-based option for agricultural mitigation in Kenya as a substantial amount of  carbon can be stored. Extension services for coffee farmers are readily available, which can be leveraged to deliver carbon-focused assistance. In addition, organic certified coffee systems commonly have a quality control entity that interfaces with farmers and could also play a role in carbon MRV.

Next Installment: How Agroforestry is Reshaping the Kenyan Countryside

Steve Zwick is Managing Editor of Ecosystem Marketplace and can be reached at szwick@ecosystemmarketplace.com.