Flower growers in Kenya’s Rift Valley have gradually reduced their runoff to keep their water clean, but subsistence farmers high in the hills can’t afford to implement such actions. WWF is spearheading a payments for watershed services program designed to fix that by asking downstream users to support sustainable agriculture efforts in the catchments. 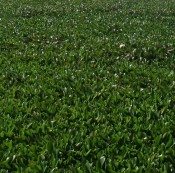 This is the first in a four-part series examining the interplay between economy and ecology in the Lake Naivasha Watershed.

25 February 2013 | NAIVASHA | Kenya | A giraffe munches nonchalantly on acacia leaves as a family of zebras dashes past him, lumbers up an embankment, and quickly zips across the road leading to Elsamere, where Joy and George Adamson rescued and raised Elsa the lioness in the 1950s. This is the Kenya of postcards and travelogues – of open vistas, Maasai herdsmen, and – increasingly – greenhouses, which have taken over the flatlands surrounding Lake Naivasha.

Some of the greenhouses are used for growing tomatoes and other vegetables, but the overwhelming majority are full of flowers – mostly roses – that will be sold in European flower shops within a day or two of being cut. Their export generates more than 2% of Kenya’s GDP, and their production directly accounts for roughly 50,000 jobs in and around the lake – not bad for a sector that didn’t even exist until 1982, when the Oserian Farm started producing cut-flowers for the Dutch market. At least 30 other growers have since followed suit, and now greenhouses cover hundreds of acres of prime farmland around the lake.

The greenhouses regulate temperatures, and some of them even make it possible to grow flowers without soil, but all need regular flows of clean water – as do the geothermal power stations in nearby Hell’s Gate National park, where the Kenya Electricity Generating Company (KenGen) is spending Sh98.6 billion ($1.314 billion) on a new 280-megawatt geothermal power plant. The facility needs the lake because the lake feeds subterranean waterways that provide the steam that will turn the plant’s turbines. Hotels along the edge of the lake need the lake, too – for it’s the lake that brings tourists here on their way to and from the Maasai-Mara National Park.

And that’s why the lovely green prairie beyond the greenhouses is an ominous site. It’s not solid land; it’s Lake Naivasha itself. What looks like prairie is actually a carpet of water hyacinth that’s choking the lake, and it’s being fed by tons of fertilizer washing down from the hills above.

Without quick action, the lake – and the economy that depends on it – will be a thing of the past.

Less than a two-hour drive from Nairobi, Naivasha is the only freshwater lake in the Kenyan Rift Valley, and it gathers water from a catchment that spreads out over 3400 square kilometers. For millennia, its size has remained constant at roughly 150 square kilometers – its water evaporating and draining at the same rate as it enters the lake. But now that’s changing. Water surges into the lake in the wet season and disappears in the dry season, while roughly seven million tons of sediment ooze into the lake each year, reducing its depth, choking its fish, and gunking up the aquifers – and that’s on top of the fertilizer runoff that’s feeding the hyacinths and algae.

To turn this around, WWF has launched a massive Payments for Watershed Services (PWS) program designed to promote sustainable agriculture programs in the hills surrounding Lake Naivasha. So far, two major flower-grower associations have joined the program, but it will have to be scaled up tenfold at least if it’s to achieve meaningful results.

The Drivers of Degradation

“There’s a common misperception that the flower-growers are the biggest polluters of the lake,” says Peter Muigai, a Community Mobilization Officer with WWF Kenya. “There are certainly some bad actors among them, but most have become quite diligent about keeping the water clean, because sediments in the lake end up clogging the drip lines in their greenhouses, and that’s expensive.”

The FBP handles common issues for eight flower-growers who employ thousands of workers in the region and provides housing, schools, and recreation facilities for employees. Its members pride themselves on their high rates of green certification, but the actions those certifications cover tend to stop at the park gates – which means they have no impact on people like Chege Mwangi, John Wachira, and Florence Muthoni.

Mwangi owns and farms a one-acre lot on a steep slope in the upper catchment 40 kilometers north of the lake. His small farm, like thousands of others, liquefies in the rain, which means that everything he does eventually impacts the lake.

“I knew this was a problem, but didn’t realize how serious it was until I joined the program,” he says.

Wachira and Muthoni own larger farms to the south, on rugged land between recently-denuded hills and the lake. Rainwater gushes past them in the wet season, and then abandons them in the dry season. In years past, they spent the dry season in the hills above – contributing to the very degradation that is threatening their own farms and the lake below.

In the weeks ahead, we’ll be meeting each of these farmers and exploring the economic and environmental impact they’re having on the lake and land around them. We’ll also meet the WWF team spearheading the project and examine the motivation of different buyers as well as the regulatory framework within which the project functions.

Next Week: PWS In Kenya: How WWF And CARE Found Common Ground In High Hills