For two years now, flower growers along the shore of Kenya’s Lake Naivasha have been paying farmers in the hills 40 kilometers away to adopt sustainable agriculture practices. They’re doing it to save their lake, but it’s also helping farmers lift themselves out of poverty. 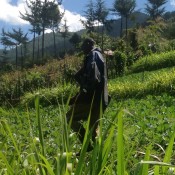 This is the fourth in a four-part series examining the interplay between economy and ecology in the Lake Naivasha Watershed. The earlier stories explore the more technical aspects of the PWS program.

18 April 2013| NAIVASHA | Kenya | Chege Mwangi looks out over his small patch of farmland on this steep incline high in Kenya’s Abardares Hills and smiles. His cabbages are bursting, and his potatoes are ready to be harvested. Then he glances across the valley.

“Mine used to look like those,” he says, pointing to the dusty hills where farmers haven’t yet joined the Payments for Watershed Services (PWS) program that’s reshaping the landscape around him. “But since the strips came in, my soil isn’t disappearing.”

The “strips” are rows of Napier grass spaced every ten meters. Embedded in each strip of Napier grass, Mwangi has three rosewood trees, which hold the soil and pull nitrogen from the air. They can even provide timber when he needs it.

The grass and trees were provided by WWF and CARE as part of a massive PWS program that aims to help farmers reduce their runoff into Lake Naivasha. The tree roots reinforce the grass strips, which will capture soil washing downhill, causing the earth to gradually rise upward until it forms terraces. That process won’t be complete for another six years, but the change has already begun; the uphill side of each grass strips is already higher than the downhill side, albeit it just by a foot or so.

“All this would have become unwanted silt if it got to the river, but here, it’s valuable soil” says Mwangi, adding that the cabbages began to grow faster just weeks after the Napier grass was planted. Down the middle of the cabbage patch, however, some of the heads are smaller than the others, and the leaves are yellow. “Before I got the grass, they all looked like that,” he says.

Peter Mungai says the smaller, yellow heads are coming in where the water ran the hardest before Mwangi joined the program.

“This is what happens when you have a depletion of nitrogen,” says Mungai, the WWF community outreach officer in charge of this region. “That means this was a waterway before PES. This was all rutted here, and the topsoil got washed away.” He suggests Mwangi plant peas next year – they fix nitrogen, he says.

The contrast between the farms on Mwangi’s side of the valley and those across from him is what convinced James Waweru to join the program as a buyer last year.

“The difference between those who subscribed to PWS and those who didn’t was quite apparent,” says Waweru, who runs the Flower Business Park Management Ltd., which coordinates activities of several flower-growers along the lake’s shore. After that visit, he persuaded FBP members to become buyers as well.

The sellers were all small farmers like Mwangi, whose plots range in size from a quarter-acre to 15 acres. Most are too small for rotating, and instead rely on intense management to keep them going.

In addition to the grass and trees, each received a $17 voucher that they could use for their own inputs. Mwangi used his to buy medicine for his cow and anti-fungal spray for his potatoes.

Interestingly, it’s the potatoes – which lie below the last strip of Napier grass – that have benefitted the most.

“I used to get just four bags from this lot,” says Mwangi. “Now I get ten.”

For Muigai, that’s something he can use to pitch the program to other farmers.

“Even though the potatoes are down at the bottom, they benefits because the water doesn’t gush like it used to,” he says. “So, his neighbors are benefitting from his actions as well, and have become quite receptive to our message.”

Planning For The Future

Mwangi keeps a dairy cow on community land above the farm, and says he’s now thinking of getting a second one and maybe keeping it on his small farm.

“The potato patch is too small to make a go of it commercially,” he says, “but if I can get enough potatoes to feed the cows, then I can earn money off the milk, and the cabbage can be my subsistence crop.”

Alternately, he’s thinking of replacing the potatoes with Napier grass and building a shed and stall for the dry season. Then he’ll have a continuous supply of grasses for additional cows uphill.

But there’s a complication: climate-change has disrupted the long-reliable rain patterns. It’s normally dry now, for example, but the region has been experiencing unseasonable rains. That’s led to something of a bounty, but it’s also unpredictable for the rest of the year – with higher highs during the day and also more frequent frosts due to the lack of cloud cover at night. The amount of rain is about the same, but it’s coming in massive gushes followed by long dry spells.

“Last year’s draught was incredibly severe,” says Daniel Koros, who oversees the project for WWF. “It resulted in total crop losses, some trees dried up and we were told by some residences that bats and some small animals died during that period.”

This all makes farming even more uncertain than it was before, says Muigai.

“He’s got to plant with uncertainty and frost in mind,” he says. “That probably means more cabbages, which have the advantage of being frost-resistant because they have big, waxy cuticles – unlike potatoes, which are more susceptible to frost.”

Even though the tuber is underground, the leaves that support it freeze easily. When that happens, the tuber that’s growing below dies as well. The Napier grass is a frost-resistant type called Kakamega 1, but there is no equivalent for potatoes.

So far, the project is paying off financially for participating farmers, but the effects have not yet trickled down to Lake Naivasha itself – although water samples show dramatic reductions in sediment up in the catchment.

All buyers have already renewed for this year, and most have upped their payments, but Mwangi says the program has to scale up – and fast – if it’s to have the impact needed. Mwangi’s lush farm (foreground) contrasts sharply with those across the valley – which are not participating in the program.