Unseasonal forest fires in Indonesia are causing respiratory problems and generating carbon emissions. The World Resources Institute uses the new Global Forest Watch tool to find out why and how these fires can be prevented. 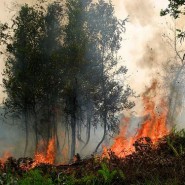 Unseasonal forest fires in Indonesia are causing respiratory problems and generating carbon emissions. The World Resources Institute uses the new Global Forest Watch tool to find out why and how these fires can be prevented.

This article was originally published on the World Resources Institute website. Click here to read the original.

4 March 2014 | The governor of Indonesia’s Riau province issued a state of emergency last week as thick haze blanketed large areas of the region, closing down schools and airports. According to local officials, more than 22,000 people have been impacted by respiratory problems–with the potential for many more if winds shift the haze to other more densely populated areas such as Kuala Lumpur or Singapore.

Clearing land for timber and agriculture is likely to blame. According to data from Global Forest Watch—a new online system that tracks tree cover change, fires, and other information in near-real time—roughly half of these fires are burning on land managed by oil palm, timber, and logging companies—despite the fact that using fire to clear land is illegal in Indonesia.

This latest haze emergency is reminiscent of a similar one that flared up in Indonesia in June 2013 (see WRI’s coverage of the fires crisis). So what’s different this time around, and what’s the same? We’ll attempt to answer these questions using satellite technology and Indonesian government data found in Global Forest Watch.

How Is this Haze Crisis Similar to that of June 2013?

And like the June 2013 crisis, almost half of the fire alerts fall within timber, palm oil, and logging concessions.

Very distinct clusters of fires can also be seen within specific company concessions. Using Global Forest Watch, everyone can explore these patterns, see the precise locations of the fires day-by-day, and determine which companies are operating in these areas.

A list of the affected concessions and companies is available at the end of the document. Closer investigation on the ground by Indonesian authorities is needed to pinpoint the exact causes of the fires at these locations and determine whether companies have perhaps broken the strict laws that limit the use of burning.

What Is Different About the New Haze Crisis?

February is an unusual time of year for fires in Indonesia—the normal burning season is April to October. This February has, however, been one of the driest on record in Indonesia and neighboring countries, affecting crop yields and setting the stage for burning. These sorts of dry spells may become more frequent and severe as climate change worsens.

These unseasonable fires are concerning, but there are also some positive, recent advances that could help prevent them from flaring up in the future. For one, stronger policy and market practices are disincentivizing and even penalizing burning and forest-clearing in Indonesia. Singapore, for example, is proposing a new law that would allow it to levy fines on companies—foreign or domestic—that cause transboundary haze events that impact the country. In the current draft bill, companies could face fines of up to US$238,000 for contributing to haze that crosses national borders. This is a rather small fine for the large companies that operate in Indonesia, but the potential impact on their reputations sends a strong signal that businesses need to do a better job of fire prevention.

Additionally, Wilmar, the world’s largest palm oil trader, recently pledged to produce and buy only deforestation-free and fire-free palm oil. Companies may see their valuable contracts with this major trader jeopardized if their concessions are affected by fires.

Furthermore, the world can now monitor these events live through Global Forest Watch. This new platform, launched on February 20 by WRI and more than 40 partners, provides near real-time information on fires and concession data.

More Action Is Needed to Prevent Fires in Indonesia’s Forests

There’s more that Indonesia and other countries should do to address the forest fires problem. While Global Forest Watch relies on the best data available, the Indonesian government has not yet released its most up-to-date concession information. The concession data shown above from the Indonesian Ministry of Forestry gives us a good idea of which companies are operating where, but it has several known inaccuracies. More transparency on the exact locations of concessions would make it easier to monitor and hold companies accountable when fires flare.

This transparency may improve in the near future. In October 2013, ministers from five Southeast Asian nations—including Indonesia—met to discuss haze prevention and agreed to share concession data on a country-to-country basis (though not make it public). Furthermore, the Roundtable on Sustainable Palm Oil (RSPO), an industry group, has adopted a resolution that commits their member companies to share concession data openly.

In the meantime, companies, NGOs, governments, and concerned citizens can go directly to Global Forest Watch to monitor fire alert data and overlay it with data on concessions, protected areas, and land cover. With this information easily accessible, companies, local law enforcement, and governments cannot use ignorance as an excuse for inaction.