Brazil’s Paiter-Surui, who created the first-ever indigenous-led REDD project, have documented illegal logging, fishing, and cattle grazing on their territory. The activities were discovered by members of the tribe acting as forest rangers in support of the REDD project. They have presented their findings to law enforcement authorities. 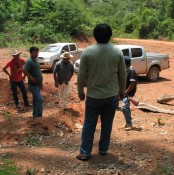 Brazil’s Paiter-Surui, who created the first-ever indigenous-led REDD project, have documented illegal logging, fishing, and cattle grazing on their territory. The activities were discovered by members of the tribe acting as forest rangers in support of the REDD project. They have presented their findings to law enforcement authorities.

The rangers, who are members of the Paiter-Surui indigenous group, have been monitoring the territory for two years as part of an effort to earn carbon credits for saving endangered forest under a voluntary REDD (reduced emissions from deforestation and degradation) program.

“Our rangers have photographed the activities and tagged the photos using GPS technology,” says Almir Narayamoga Surui, overall chief of the Paiter-Surui. “They also tracked the loggers to a mill just outside the territory, and now we will present our findings to the local office of FUNAI (Fundaçí£o Nacional do índio, the National Indian Bureau) and other law enforcement agencies. We need them to act on this information.”

All of the illegal activity was concentrated along one of eight navigable roads that provide access to the territory, and Almir said that tribal authorities were also speaking with “a small handful” of Paiter-Surui who they suspect of colluding with the loggers.

The rangers were hired by tribal leaders to support the Surui Forest Carbon Project (SFCP), which is the first REDD project conceived and implemented by indigenous people. In April, its design earned dual validation under both the Verified Carbon Standard (VCS) and the Climate, Community and Biodiversity (CCB) Standard Gold. The VCS ensures that the project is following recognized procedures for measuring carbon-emission reductions, while the CCB Standard ensures the project is being carried out in a way that preserves biodiversity and serves the people living there. The project is seen as a test of key guidelines and criteria for REDD safeguards developed by Brazilian civil society organizations, and it has initiated the development of a social impact assessment with partner organizations.

Carbon credits, however, cannot be issued until the tribe proves that its actions have reduced deforestation, and the rangers are part of that effort.

They were trained by two environmental NGOs, Instituto de Conservaçí£o e Desenvolvimento Sustentavel do Amazonas (Idesam) and Equipe de Conservaçí£o da Amazí´niaand (ECAM), and their actions on the ground are being coordinated by their own tribal government with support from Associaçí£o de Defesa Etnoambiental Kanindé (Kanindé), a local NGO long affiliated with the Surui.

For now, funding is coming from the Rainforest Fund and USAID, but the REDD project is designed to provide long-term funding to train and hire additional members of the tribe to man perimeter posts that prevent such incursions in the first place.

“The Surui are doing their part to protect their 248,000 hectares of rainforest on traditional lands, but they can’t do it alone,” says Kanindé founder Ivaneide Bandeira. “For implementation to work, it is urgent and essential for the Brazilian Federal Government to immediately expel the illegal loggers from Surui lands.”

Scroll down for images. After extracting the most valuable timber, loggers burned the remaining trees on this hillside – perhaps in preparation for cattle grazing. Hillside deforestation is especially damaging because it leaves the terrain susceptible to erosion. Young members of the Paiter-Surui came upon this illegal logging access road carved into the forest off of one of the main entry points. Paiter-Surui rangers tracked timber extracted from their territory to this mill, located just outside the indigenous territory. Logs stacked up outside the mill.