Negotiations remain deadlocked in Durban, but a coalition of rainforest people are moving forward with plans to build up capacity for REDD, and they’ve engaged the financial strength of the Inter-American Development Bank and the know-how of Yale University to make it happen.  Here’s the latest from Durban. 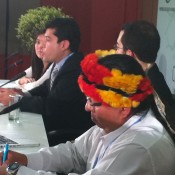 Representative from (Indigenous Peoples of the Amazon Basin to Combat Climate Change) have announced more details of a program that aims to help indigenous groups in the Amazon Basin develop REDD projects.   Initially announced in May, the program was developed through an agreement between the and the (IDB).   Additional partners include the , the and, most recently, the .

9 December 2011 | DURBAN | Representative from Pueblos Indí­genas de la Cuenca Amazí³nica frente al Cambio Climí¡tico (Indigenous Peoples of the Amazon Basin to Combat Climate Change) have announced more details of a program that aims to help indigenous groups in the Amazon Basin develop REDD projects.   Initially announced in May, the program was developed through an agreement between the Coordinator of Indigenous Organizations of the Amazon Basin (COICA) and the Inter-American Development Bank (IDB).   Additional partners include the Woods Hole Research Center, the Environmental Defense Fund and, most recently, the Yale School of Forestry.

Focusing on the Amazon basin region of Brazil, Peru, Bolivia, Ecuador and Colombia, the focus of this project is to plan for and execute indigenous-led pilot projects to reduce deforestation.   In recent years, the Amazon basin’s ecosystems are increasingly being destroyed and the indigenous people are a witness to this negative changes.

“We indigenous people, we are dependent on the forest,” says COICA economic coordinator Juan Carlos Jintiach.   “This is one of the most important projects that we are going to be apart of.”

The project will have three components:

COICA first began discussing the possibility of this project in 2008, consulting with the leaders of the indigenous organizations of these different countries to develop a plan of action.   Then, at the end of 2009, they submitted a proposal.

The next year was spent in negotiations, with COICA taking a bottom-up approach as they worked directly with the indigenous peoples to understand their thoughts.   At the end of 2010, IDB and COICA signed an agreement, with IDB funding the COICA directed project.

The initiative that COICA took as well as their leadership as the implementation partner is essential to the innovative approach of the project.   “Indigenous people play the key role in all this process,” says Jintiach.

And for many indigenous groups, the fight against climate change has not always been positive.

REDD offers a number of benefits for indigenous groups, including securing legal and territorial rights and financial rewards.   In addition, REDD is benefitted by the involvement of indigenous people because, historically, they are some of the world’s best forest managers.

However, though it should be a win-win for everyone, the indigenous people have been exploited by so-called carbon cowboys in the past, as Theodore Varns of the Yale School of Forestry pointed.

For Varns, this is why it is so important that COICA is involved: “By having COICA, an indigenous organization, implement this program, they can help build trust and capacity to counter the negative experiences of the past.”

In addition, Varns see this project implementation as an opportunity to learn from COICA and the indigenous groups.

“We see learning as a two-way street,” says Varns.   “Yale, IDB, Environmental Defense and Woods Hole can offer technical expertise, but they lack the situated knowledge and understanding of the environment where these trainings are to take place.”

The involvement of COICA has also ensured that indigenous groups have their voice heard during every step of the process.   “COICA has an initiative approach and they approached us,” says Gonzalo Griebenow of the IDB.   “The project was designed together so it has a lot of buy-in because it is the indigenous people organization who came and designed the project.”

In addition to the securing rights and combating climate change, one of the motivations of the indigenous peoples was to increase their involvement with Multilateral Development Banks (MDB), according to Jintiach.     They will gain the experience – and exposure – needed as the executor agency in their work with IDB.

“That is important because that will allow them to build internal capacities to become real players, big players in the development of indigenous peoples,” says Griebenow.

The need for COICA to have a prominent role in this REDD project essentially boils down to protecting rights—and practicing their traditional knowledge.

Jintech says the indigenous people never want to lose their understanding of traditional knowledge, which they can utilize in these REDD projects.

COICA’s initiation of this project is a fight for the rights of the land.   Through the collaboration on this project, indigenous groups were also able to discuss the context of rights within REDD+.

“We have defined the policy lines about REDD+ and climate change,” says Jintech.   “Among these things, we are working on a regional strategy to defend the rights of our territories.

The Yale School of Forestry was asked to identify issues that might arise during the project implementation and opportunities for improvement.   Since REDD is a controversial issue, one of the first stops for Yale was safeguards.

“We decided to look at how the project should incorporate a broader respect for safeguards and indigenous rights,” says Varns.   “We went about this by evaluating several key areas of information, drawing on the existing academic and institutional knowledge, current efforts on safeguards, and existing experiences on REDD+ as well as speaking with experts in the field.”

Based on this as well as an understanding of Indigenous peoples’ concerns, the school recommended that the training include a strong curriculum on understanding the legal context for REDD projects to ensure that traditional practices are not interrupted or restricted.   In addition, the indigenous groups should be taken through the Free Prior and Informed consent process.

Beyond rights, the training will involve a basic curriculum on climate change as well as building capacity to assess carbon stocks and greenhouse gasses in a metric.

Currently, IDB is developing monitoring reporting and evaluation plan that will coincide with COICA’s leadership in the training, allowing indigenous groups to understand and be trained in all aspects of a carbon project.

The capacity of the indigenous groups to monitor the carbon is part of emphasizing the rights over the territory.   Instead of an outside group coming in, the indigenous people will be in control of this aspect.

“This also means participation and collecting data on what the project and processes are addressing and complying with safeguard protections,” says Varns.

As these pilot projects get underway, Varns said that the partnership is looking at ways to share these experiences and information about practices and livelihoods.   Understanding this will allow the project to respond to their needs and share the experience with the broader world.

The agreement between IDB  and COICA was officially announced in May of this year.   However, EDF had been working with COICA since 2009 to meet IDBs pre-conditions to become an executing agency.

COICA has completed these pre-condition documents and submitted them to IDB.   Now they are waiting to be formarly declared eligible for the funding.   Soon, they will recieve their first disbursement to begin implementing the project on the ground – beginning one of the first times that an indigneous organization is the implementing partner in a REDD project.