We used to find these little birds nurturing their young in the prairie grass of North America, but now we’re likely to find them in hayfields – often after mowing machines and grazing animals found them first. That prompted EcoAsset Markets and the University of Rhode Island to experiment with a "nature services exchange" that compensates farmers for idling their machines during mating season. 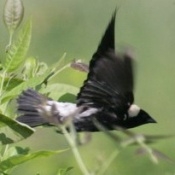 We used to find these little birds nurturing their young in the prairie grass of North America, but now we’re likely to find them in hayfields – often after mowing machines and grazing animals found them first. That prompted EcoAsset Markets and the University of Rhode Island to experiment with a “nature services exchange” that compensates farmers for idling their machines during mating season.

15 October 2008 | The tiny island community of Jamestown sits at the mouth of Narragansett Bay, in the US state of Rhode Island. It is home to 2700 households, 12 farms – and a few dozen bobolinks.

This gaggle of birds hardly constitutes the stock of a major biodiversity bank, but it (and the community of humans around it) does offer a chance to measure the willingness of locals to open the ole’ pocketbook for restoration of their streams, improvement of their water quality, and dozens of other critical environmental improvements.

In 2005, my company, EcoAsset Markets, Inc. (EAM) and the University of Rhode Island’s Department of Environmental and Natural Resources received one of the earliest Conservation Innovation Grants from the United States Department of Agriculture to measure that willingness by developing the Nature Services Exchange of Jamestown, a community-based market for conserving bobolink habitat on local farm fields.

Dr. Stephen Swallow and Dr. Christopher Anderson of the University of Rhode Island (URI) have spent years learning about people’s willingness to pay for ecosystem services and ecosystem service improvements. They’ve also spent significant time looking at what economic mechanism best entices pocketbooks to open (in plain English: how to pitch the idea).

Dr. Anderson works primarily as an experimental economist and takes all of us mere mortals into the depths of his computer simulation lab to investigate our wallet-opening capabilities.

Dr. Swallow is a resource economist who focuses on valuing rural environmental amenities using contingent choice and other economic mechanisms.

The Market Survey: Testing the Waters

Before we launched the exchange, we sent an extensive survey to each of the island’s households. From that survey, we developed preliminary “willingness-to-pay” data using responses to hypothetical choice experiments and other demographic and preference questions – testing four economic mechanisms to elicit payments for bobolink habitat conservation.

We received completed surveys from 38 percent of households and found that survey respondents’ most valued method of making payments was “provision point with proportional rebate” – a fancy way of saying they wanted to pay us just enough money to implement the conservation practice on the farm and then proportionally return anything left over to all who invested.

We knew that farmers would lose money by not mowing and grazing during sensitive periods of the year, so we estimated this loss and divided it by the number of households indicating a willingness to compensate. Then we threw in a discount to allow for those voting yes in theory, knowing that some might not open their wallets when it came time to pay. This gave us a price of US$53.26 per household per year.

Next we conducted focus groups to determine what types of marketing materials were most effective: informational advertisements, gimmicks (a sticker for your bumper), and direct mail.

From those focus groups, we determined which messages were clear, which were confusing, and what importance education played in the marketing materials.

In the spring of 2007, and again in 2008, we ran mail solicitation campaigns and found 12 to 14 percent of households participating, and the hypothetical prices played out in reality.

The project launched with real money using several test mechanisms. The money went into a fund that distributes money to participating farmers based upon predetermined contracts for hayfield management and remits the remainder back to investors.

Parallel to all of this economic and market activity, Carol Trocki, our conservation biologist, was surveying bird populations and researching other environmental conditions. These studies gave us good indications on the effect of the hayfield conservation practices – both on the birds and on the humans.

The Meaning of It All

Overall, the findings have been quite promising.

Second, they imply that, if we are smart enough to discriminate and measure the various ecosystem services provided by farms, we can approach community households to ask for their support in conservation.

There are, of course, some unknowns – the biggest being whether people will be willing to keep making payments year-over-year. Our intuition tells us that households will continue to invest, but only if we are able to show that measurable benefits accrue from the practices. We need, however, to go further with our work on the sustainability of the market.

The exchange project team is now working on a website that will enable households to determine if community-based markets might be valuable economic developments for their farming-centered towns and cities. The site will help them evaluate their communities, offer broad information on the types of conservation finance and ecosystem service markets that exist, and enable them to create a web-based marketplace.

The potential also exists for these exchanges to function as “environmental utilities” in suburban and urban areas to finance stream restorations, tree planting, green infrastructure, and other ecoservice improvements.

EAM has, in the past year, developed a business plan that allows for further pilot market development and expands the analytic systems that make markets function smoothly. The company’s financial projections indicate that $2 million will be necessary to realize the necessary systems, develop marketing structure, and hire personnel to complete test markets.

Communities have much to gain from making investments that conserve sustainable farmland and improve farm practices. With careful planning, they can make those investments in ways that will allow households to eventually share in the credit revenues that arise from carbon, and other, markets.

We’d like to see many Nature Services Exchanges across the country.

Rick Pace is CEO of EcoAsset Markets (EAM) and maintains a weblog at http://ecoassetmarkets.wordpress.com/

Please see our Reprint Guidelines for details on republishing this article.