Colombia’s Tolo River People collectively own 32,000 acres of rainforest, and that forest feeds the river on which they depend. But ownership means nothing if you can’t protect it. Four years ago, they decided to start harnessing carbon finance to save the forest and preserve their way of life. This is their story. 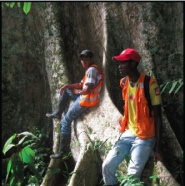 29 July 2014 | Five young men are cutting their way through dense rainforest vegetation in the northernmost part of Colombia forest that was already old-growth when the conquistadors first set foot on the continent five centuries ago. The silence is interrupted only by the sound of running water from the many streams dissecting the hilly terrain. It is midday, and the heat is intolerable even for the mosquitoes. Frazier Guisao, an ex-logger, heads the single-file line, slicing through the thick undergrowth with a machete to carve out a narrow tunnel. The crew is patrolling the forest to protect it from illicit clearing.

Old trees in this pristine forest reach as high as 10-story buildings, emerging well above the thick canopy, and the men sit for a rest at the buttress roots of a giant centennial almendro tree. Guisao examines the trunk and makes a quick calculation in his head.

“This wood is worth around three million pesos, he says. That’s about $1,500 USD. As a former commercial logger, he knows it would have taken him about two hours to fell it with the chainsaw. The work they’re doing now isn’t nearly as lucrative in the short-term, but it’s much more rewarding.

Preserving the Forest; Protecting the Future

Guisao and his team are wearing T-shirts with the bright colorful letters COCOMASUR, which, in Spanish, stands for Black Communities of the Tolo River and South Coast the name of their small Afro-Colombian community organization. The national constitution grants land titles to traditional forest peoples, and the Tolo River inhabitants now collectively own 32,000 acres of rainforest in Chocí³ region, near Colombia’s border with Panama. The patrol leader says it takes him four days to walk the entire perimeter.

Frazier Guisao, member of the Tolo River forest patrol
sitting at the edge of the community forest.

They need the patrols because they need the forest, which feeds and nurtures the Tolo River, which in turn provides the community with both its name and its drinking water. The forest also protects animals and plants for future generations.

From Logger to Ranger

Guisao began his transition from being a logger who harvested the forest to being a ranger who protects it after a community assembly four years ago, when the 1500 members of the Tolo River organization jointly decided to affirm their land rights and protect the forest. That transition, however, didn’t come easy because there were two major threats to the trees. One was external: wealthy businessmen in a nearby town were expanding their cattle ranches. The other was internal: community members like Guisao who logged the forest commercially and depended on the practice to feed their families.

To save the forest, the Tolo River people needed to wean themselves off the logging that paid their bills and find a way to pay for patrols that would keep outsiders from chopping down their trees.

It’s a challenge faced by forest people around the world, and one that impacts all of us. Indeed, the loss of pristine forest in the tropics and its blow to biodiversity and ecosystem services are massive and irreversible. To make matters even worse, carbon emissions from deforestation compound the problem of climate change every year as much as one fifth of the global carbon emissions may come from cut down trees, according to the Intergovernmental Panel on Climate Change (IPCC).

Traditionally, there has been little funding for conservation, but this may be changing, and the Tolo River people are at the forefront of that change.

An additional benefit for both the community and the rest of the world is that the trees and the soil in their forest contain large quantities of carbon, which bonds with oxygen to form the greenhouse gas carbon dioxide when released into the atmosphere.

Fortunately for the community, many companies and governments around the world volunteer to fund forest conservation projects as an attempt to offset part of their own carbon emissions. This international initiative is named Reducing Emissions from Deforestation and Forest Degradation (REDD). The principle is simple: a company striving to be carbon neutral would first try to reduce its own carbon emissions as much as possible through more energy-efficient equipment and strict monitoring of its supply chain. Whatever emissions it could not reduce, it would offset by paying a forest community to protect the trees from clearing.

To best estimate the amount of carbon the Tolo River community could prevent from being emitted, COCOMASUR teamed up with Anthrotect, a U.S.-based organization that “works with community landholders to implement payment for ecosystem services projects that connect communities with emerging markets for carbon and biodiversity, according to documents filed with the Verified Carbon Standard (VCS), which is the certification program under which they chose to become certified. The organizations then contracted forestry experts from Bogota, Medellin, and the US state of California who compared the forest with other unguarded forested areas nearby and concluded that roughly 13,000 hectares would be lost to cattle ranching, agriculture, and selective logging if defensive actions weren’t taken immediately. Based on the blend of trees in the forest and their average height and width, they pegged the total greenhouse gas emissions from that destruction at 2,800,000 tons of carbon dioxide over the next 30 years.

COCOMASUR and its partners then began the arduous process of protecting the forest by raising awareness of collective identity and rights, demarcating territorial boundaries, establishing regular community patrols and developing sustainable agricultural and silvopastoral practices.

In 2012, VCS-certified auditors visited the site and concluded that these actions had saved 170,000 trees containing about 28,000 tons of carbon. That carbon would have converted to over 100,000 tons of carbon dioxide if released into the atmosphere, or the equivalent of 20,000 cars being taken off the road for a year.

A Big Year for REDD

That year, half a billion dollars worth of carbon credit transactions took place in the voluntary carbon market, according to Ecosystem Marketplace’s 2013 State of Voluntary Carbon Markets Report. In addition, the United Nations is leading an initiative to streamline REDD projects around the world in anticipation that mandatory carbon offsetting might eventually become part of a new global climate treaty. During the latest Climate Conference in Warsaw in December 2013, all countries agreed on a forest conservation mechanism to be implemented in the years to come a large step forward for conservation projects around the world.

But when the Tolo River people began their project, REDD was still a poorly-understood mechanism, and the VCS was untested. Critics weren’t convinced the standard could both deliver the environmental rigor it promised and keep out “carbon cowboys who they feared would run roughshod over the very indigenous people REDD was designed to protect.

Still, the Tolo River people were determined to succeed and remain so to this day: “Our community will always continue trying to protect our forest with or without the project. But having the project gives us the resources to do that, says community leader Aureliano Cí³rdoba.

It is crucially important to learn from mistakes and look for successful models for the sake of the forest, the people who live in it and the global climate.

This is the story of one community that found a way to do this right.

NEXT INSTALLMENT: Meet the Cattlemen

Tanya Dimitrova just graduated from University of California, Berkeley, with a masters degree in energy and resources. She lives in Texas and works as freelance science and environmental journalist.

This is the first in an ongoing series adapted from Ã¢â‚¬Å“Modern day forest conservation: A Colombian community protecting its rainforest one carbon credit at a time,Ã¢â‚¬Â by Tanya Dimitrova.

An excerpt also appeared in Grist, as In the Colombian rainforest, an experiment in community-driven climate protection.

You can also find the REDD Desk Project summary of this project here.