Carbon markets are supporting the transition to clean cookstove societies by helping to finance their distribution in parts of the world where traditional stoves infect the local people with health conditions and premature deaths. Clean cookstoves prevent millions of tons of carbon dioxide from being dispersed into the air while providing an efficient and clean cooking method for the locals.

24 October 2013 | Some problems are complex. Others are simple. And often the twain converge.

Take, for example, the complex challenge of climate change. It’s caused by almost everything we do. It impacts us in ways that are difficult to fathom. And fixing it will require us to completely update the global energy sector.

Contrast this with the fairly straightforward problem of indoor air pollution. This one is caused by traditional stoves that burn dirty fuels inefficiently. It kills four million people every year. And fixing it will require us to replace about 1 billion traditional stoves with cleaner varieties.

Simple? Yes — but not easy, because those billion stoves are scattered all across the world, and replacing them also requires marketing, education and training. Aid agencies, nonprofits and commercial manufacturers have spent decades building up successful regional programs, but many are finding it difficult to get that extra bit of finance that can turn medium-sized efforts into larger ones and larger ones into massive ones.

Increasingly our research shows that the critical, final piece of finance is coming from a surprising source.

Stoves and fire pits, it turns out, pump hundreds of millions of tons of carbon dioxide into the atmosphere every year. That makes them part of the climate-change problem, which means we all have an interest in replacing them.

Over the years, standard-setting organizations like the Gold Standard and the Clean Development Mechanism have made it possible to generate carbon offsets by helping distribute clean cookstoves. In some cases, the credits provide deep discounts for poor people and aid agencies, but most of the money goes towards manufacturing, marketing, distribution and testing of stoves and fuels — activities that support a sustainable market that generates reductions many times higher than the number of credits generated.

Last year, carbon markets funneled more than $167 million into clean cookstove distribution, according to our most recent report produced in partnership with the Global Alliance for Clean Cookstoves and unveiled by former US Secretary of State Hillary Clinton last week in New York. That’s a huge proportion of the $246 million that carbon revenues have contributed to the stove sector over time.

The Funding Mosaic: Carbon Finance Is One Piece Of The Puzzle 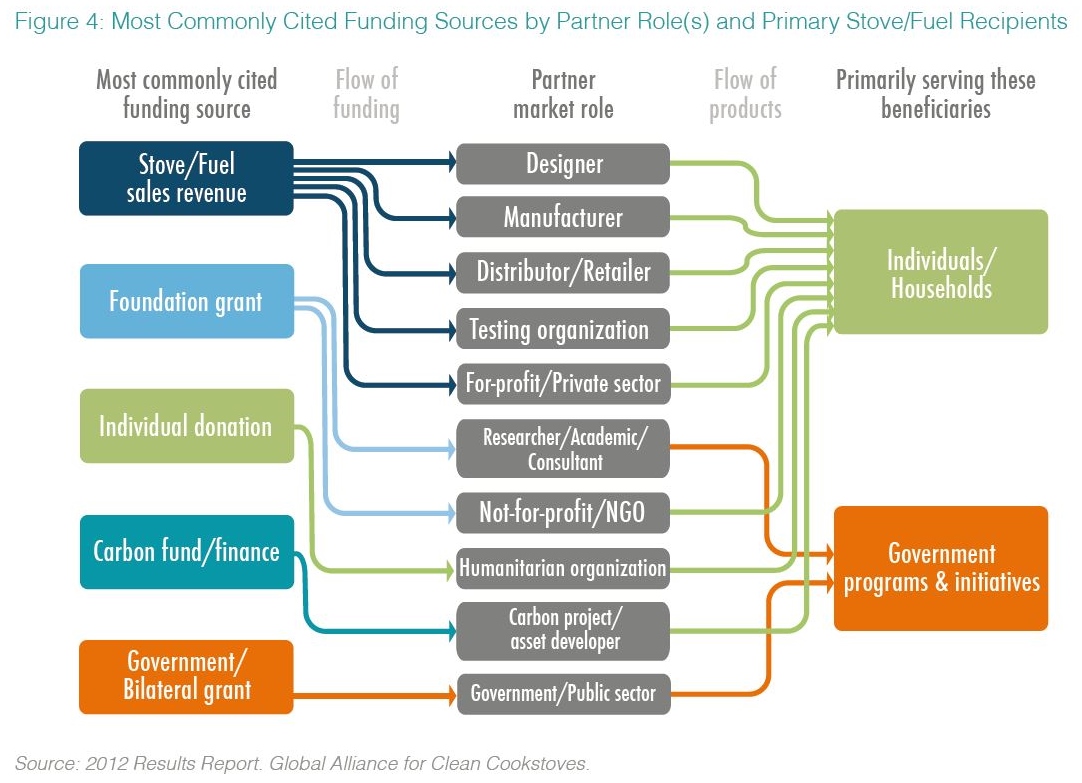 The Alliance itself has more than 800 partners around the world, and its aim is to get these efficient stoves into 100 million households by 2020. Our research shows that Alliance partners distributed 8.2 million stoves in 2012 — up from 3.6 million the year before — and that carbon finance helped pay for about half of them.

That’s especially good news for women — because it not only means better health, but less time spent gathering wood and more time spent doing other things that improve their lives. Indeed, the report found that 172 of the Alliance partners had made it a priority to empower women.

To promote this understanding, the Skoll Foundation supports Forest Trends, the environmental nonprofit that publishes Ecosystem Marketplace and pilots efforts like the Surui Carbon Project in Brazil. Forest Trends was created by foresters to explore the interplay between economy and ecology, and it’s been invited to participate in the Social Entrepreneurs Challenge. Launched on September 30 by the Skoll Foundation and Huffington Post, this is the largest CrowdRise campaign ever, involving scores of social entrepreneurs from around the world. You can participate by shouting us out on Huffington Post or sponsoring us on CrowdRise, where we aim is to raise $45,000 by November 22.

As in cookstoves, a little often goes a long way. If enough of us meet our goals, Skoll will step up with matching funds that we’ll use to expand our coverage into these fascinating and important mechanisms.

Read about cookstoves in Spanish here.

Calling All Fans Of Ecosystem Marketplace: Here Is Your Chance To Help Us Help You!

Steve Zwick is Managing Editor of Ecosystem Marketplace. He can be reached at [email protected]
Please see our Reprint Guidelines for details on republishing our articles.