Governors from the Brazilian, Peruvian, and Bolivian states across which the Amazon Rainforest spreads participated in an unprecedented panel discussion in Mato Grasso at the 14th Katoomba Meeting there, and were told by Brazilian Environment Minister Carlos Minc that schemes promoting payments for ecosystem services are the Rainforest’s best hope survival. 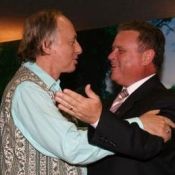 Governors from the Brazilian, Peruvian, and Bolivian states across which the Amazon Rainforest spreads participated in an unprecedented panel discussion in Mato Grasso at the 14th Katoomba Meeting there, and were told by Brazilian Environment Minister Carlos Minc that schemes promoting payments for ecosystem services are the Rainforest’s best hope survival.

1 April 2009 | Now in her third year as Governor of Brazil’s Parí¡ state, Ana Julia Carepa was in full command of the 1,400 delegates to the 14th Katoomba Meeting in neighboring Mato Grosso.

The topic was land tenure and the importance of getting it right if schemes that promote payments for ecosystem services (PES) and reduced emissions from deforestation and degradation (REDD) don’t end up promoting land-grab that devastate the rural poor.

Delegates were riveted – until the country’s charismatic minister of the environment, Carlos Minc, hopped onto the stage, looking like a rock star at the peak of his fame – in sharp contrast to the well-pressed governors of states in Brazil, Bolivia, and Peru across which the Amazon Rainforest spreads – specifically, Parí¡, Mato Grosso, Amazonas, Acre, Amapí¡, Rondí´nia, Tocantins, and Roraima.

A co-founder of the Green Party who spent the 1970s in exile for opposing the dictatorship, Minc has the environmental credibility to help ecosystem markets achieve the kind of economy of scale they need if they are going to deliver results – and, it is hoped, the integrity to ensure they don’t simply become the vehicle for land-grabbing that Carepa warned about.

Mato Grosso Governor Blairo Maggi, on the other hand, is one of the country’s leading soybean producers and has long been perceived as an enemy of the rainforest. Recently, however, he has begun to embrace PES schemes designed to channel money to private landowners in exchange for environmental set-asides and other programs.

“I think a lot of you came here expecting a fight between the two of us,” said Minc, addressing the crowd but looking Maggi squarely in the eyes. “Ten years ago, we would have.”

Instead, Minc and Maggi embraced and announced they had reached an agreement to alter the state’s environmental laws so they could more easily be docked into an emerging federal system – even as Governor Ivo Cassol of Rondí´nia told Minc that states need more autonomy to meet the growing environmental challenge.

When it was Minc’s turn to speak, he praised Maggi for embracing “mechanisms to help people enforce the law” and urged the governors to fast-track any plans they have for promoting PES schemes.

“It’s easy to shut down one illegal logging operation,” he said. “But it’s very difficult to create 50 sustainable jobs that don’t disrupt out biosphere.”

Minc was a leading proponent of the Atlantic Forest Fund, a fee-based PES scheme he initiated while acting as minister of the environment for his home state of Rio de Janeiro before being called on to replace the popular Marina Silva as federal environment minister.

Since embracing PES schemes, Minc has faced criticism from the left, who say such schemes reward the very people who have caused the most environmental damage.

We will be presenting more findings from Mato Grosso in the weeks ahead, as well as uploading audio from the panel discussions. For now, here is a link to a recording of the synchronous English translation from Wednesday’s panel discussion:

NOTE: If the above streaming link doesn’t work, you can download the mp3 on the right.