If efforts to save the tropical rainforests by Reducing Emissions from Deforestation and Degradation (REDD) ever yield large-scale results, it will be in part because of demonstration projects like those in Brazil’s Guaraqueçaba Environmental Protection Area. Ecosystem Marketplace takes stock of three projects launched over the past decade by two NGOs and three corporate donors in the GEPA.

Fifth in a series leading up to the 14th Katoomba Meeting in Mato Grasso, Brazil. 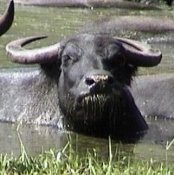 If efforts to save the tropical rainforests by Reducing Emissions from Deforestation and Degradation (REDD) ever yield large-scale results, it will be in part because of demonstration projects like those in Brazil’s Guaraqueaba Environmental Protection Area.

Fifth in a series leading up to the 14th Katoomba Meeting in Mato Grasso, Brazil.

18 March 2009 | The first Asian Water Buffalo to cross the Pacific staggered onto dry land in Brazil more than a century ago, and quickly took to the country’s lush prairie grasses, making cattlemen wealthy in the process. By the 1970s, their progeny had outgrown the plains and were being herded into the rainforests, often at the hand of government-sponsored deforestation projects – even as environmentalists decried the immorality of putting agriculture before ecology.

By the early 1980s, however, environmental economists began winning converts among Brazilian regulators to the idea that healthy rainforests deliver more economic value in the form of environmental services than do cattlemen and their buffalo.

The Economics of Nature

Key among these services is regulation of the atmosphere and the earth’s temperature, with the Intergovernmental Panel on Climate Change (IPCC) estimating that rainforest destruction contributes roughly 20% of all greenhouse gasses.

The result is a growing body of progressive environmental protection mechanisms, and an increasing number of industrial emitters who believe they can offset their industrial emissions by saving rainforests – a process called Reducing Emissions from Deforestation and forest Degradation (REDD).

Together, with funding from American Electric Power (AEP), General Motors, and Chevron, they began the process of purchasing 19,000 hectares of degraded land in eastern Brazil’s newly-designated Guaraqueaba Environmental Protection Area, which lies in an ecosystem that has been recognized as a World Biosphere Reserve by the United Nations Economic and Social Organization (UNESCO), making it one of the planet’s highest priorities for conservation.

The quality of the land ranged from standing forest to degraded pasture, and the companies hoped to offset their greenhouse gas emissions by saving the existing forests from destruction and restoring the degraded lands.

The 40-year project aims not only to reduce emissions by avoiding deforestation in the Atlantic Rainforest, but also to test and expand the limits of REDD financing to restore degraded lands across the region and to create jobs for local inhabitants. On top of all this, project developers also aimed to develop procedures that can be replicated across the surrounding 314,000 hectares of protected land.

Bill Stanley, who runs TNC’s global climate-change initiative, says the technological phase is already proving fruitful. “These projects and others have basically settled the debate over whether we can measure carbon in trees,” he says. “SPVS has been especially good at measuring species diversity and promoting its development, and the tools they helped develop are being applied in other places as well.”

Now, he says, the challenge is more social than scientific.

“The technical issues that a lot of people thought were the major obstacles to these types of projects are not the major obstacles at all,” he says. “The most difficult thing is coming up with strategies for protected forests that will work for local people and for the governments involved and that will be sustainable.”

In 1985, the state of Paran¡ reversed its policy of promoting agriculture in the Atlantic Rainforest and instead created the Guaraqueaba Environmental Protection Area (EPA), mandating a phased shift to “sustainable use” of lands as determined by the EPA committee. Then, in 1992, the state initiated the ICMS Ecologico, a sales tax designed to raise funds for conservation.

Meanwhile, in neighboring Bolivia, TNC and Bolivian NGO Fundaci³n Amigos de la Naturaleza (FAN) were putting together the first forest emissions reduction project based on Kyoto Protocol standards to be verified by a third party. That project, the Noel Kempff Mercado National Park, caught the eye of environmental NGOs across Latin America.

Realizing that income from ICMS Ecologico is a drop in the bucket compared to both income from agriculture and the cost of restoring degraded land, SPVS devised a plan to harvest funding from carbon offsets to purchase three private properties in the Guaraqueaba EPA which they wanted to convert to private nature reserves (Reserva Particular do Patrim´nio Natural, RPPN).

On the technology front alone, SPVS’s plans for Guaraquaba were nothing if not ambitious. They wanted to save endangered forests from the chain saw, re-plant old forests, and nurture degraded forests back to health with as little intervention as possible. All of this meant making sure than any reforestation came as close as possible to reviving the exact same blend of trees that had been chopped down for grazing.

But they faced a serious challenge: the 1997 Kyoto Protocol had come into effect without a provision for generating offsets by saving endangered forests, leaving many NGOs in the lurch.

“We expected a lot of big companies to come in and put a lot of money into these forests,” says Miguel Calmon, who at the time was a consultant with the environmental services arm of Winrock International, a global NGO that, among other things, develops methodologies for measuring the amount of carbon captured in trees. “We had trained almost 40 other NGOs in how to conduct feasibility studies, how to structure products, how to monitor carbon sequestration, etc. so that they wouldn’t risk being unprepared when the money came,” he says. “But that never happened.”

In 2000, Calmon joined TNC, and is currently director of the group’s Atlantic Forest Conservation Program.

With compliance offsets off the table, SPVS decided to look for corporate investors interested in “gourmet” offset – those offering benefits beyond mere carbon sequestration. Having worked with TNC since the early 1990s, SPVS turned to them for help on the financing.

The timing couldn’t have been better. AEP had just contacted TNC to find out how it could offset its emissions by saving a piece of the rainforest, and the energy concern was willing to spend $5.4 million to do so. General Motors and Chevron soon joined the discussions as well, and SPVS began approaching local landowners with offers.

They dubbed the three properties the Guaraqueaba Climate Action Project, and then began putting their theories to the test.

Roughly 30% of the funds went to land acquisition, with the remainder being placed in an endowment fund that is intended to provide funding well beyond the project’s 40-year life. In the near term, the endowment will cover the cost of carbon monitoring and other expenses related to the upgrade of the reserve. Long-term, the fund is designed to cover the cost of management of the reserve and working with local communities.

On degraded lands, SPVS chose to let as much forest return on its own as possible rather than to actively re-plant. Where re-planting was necessary, they hired locals to dig through the land in search of native seeds that had lay dormant under the grazing fields.

“That was a real production,” says Stanley. “They brought the seeds to a nursery and did everything they could to get them to germinate – submerging them, cutting them – anything to get seedlings they could plant.”

To make sure the extra effort pays off in all ways possible, TNC brought in Calmon’s former employer, Winrock International.

“We basically took their methodologies and moved them forward,” says Gilberto Tiepolo, TNC’s Forest Coordinator. “For example, we quantified the differences in the amount of carbon that different species of tree capture, which makes measurement more accurate.”

That work will pay off for other groups as well – helping to provide more certainty for both buyers and sellers around the world.

Giving Back to the Community

All of these labor-intensive activities had the advantage of bringing undocumented locals into the employment system for the first time, and the project still has roughly 50 people from the region working for it full-time, ranging from forest rangers to reforestation technicians.

SPVS also conducts ongoing training workshops in skills such as ecology, first aid, and search and rescue, and has also been working to promote sustainable business in and around the reserve. The group recently helped set up a beekeeping enterprise for the production of honey, and is in talks with more than 100 farmers interested in the production of organic bananas.

“SPVS is looking at lots of different ways of generating income not only in the reserve, but in the surrounding communities,” says Calmon. “Only then will you really do something about the economic drivers of deforestation.”

After purchasing the land, SPVS sent all of the buffalo off to slaughter and also conducted interviews with farmers to make sure they weren’t simply taking the money and clearing land someplace else.

“There’s a lot of debate as to how far we should go with that,” says Calmon. “We do what we can, and the C³digo Florestal does place limits on the amount of forest that a farmer can chop down – but we all know there is a lot of illegal logging, and ultimately the only way to really eliminate leakage is to create incentives for not doing it.”

He says that local farmers are beginning to take heed, and that SPVS and other NGOs meet regularly to discuss ways of expanding the model across the entire Guaraqueaba.

“We used to have agriculture cooperatives, and now we have to think about forestry cooperatives,” he says. “In the future the model should not focus on land acquisition per se, but work with land-owners to help them profit by keeping their forests alive.”