Norwegian forestry and carbon offset group Green Resources last week became the first carbon offset project developer to register a reforestation project under the Voluntary Carbon Standard’s guidelines for reducing greenhouse gas emissions from agriculture, forestry, and land use. This week, a second project was also verified – and plenty of others are sure to follow. 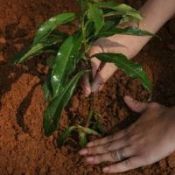 Norwegian forestry and carbon offset group Green Resources last week became the first carbon offset project developer to register a reforestation project under the Voluntary Carbon Standard’s guidelines for reducing greenhouse gas emissions from agriculture, forestry, and land use. This week, a second project was also verified – and plenty of others are sure to follow.

22 July 2009 | On Friday, July 17, German carbon offset project verifier TÃƒÅ“V Sí¼d wrapped up a two-year audit and gave its stamp of approval to the first-ever carbon offset project recognized under the Voluntary Carbon Standard‘s (VCS) guidelines for agriculture, forestry, and land use (AFOLU), which were finalized in 2007.

The project, which covers two locations (Uchindile and Mapanda) in the Southern Highlands of Tanzania, was launched in 1997 by Green Resources, a Norwegian company focused on carbon offsets and forest products. It will reforest 10,814 hectares of degraded land and conserve 7,565 hectares for local biodiversity.

On a broader level, the project offers an opportunity to test the market’s acceptance of forestry credits that aim to achieve credibility by applying the VCS’s “buffer” approach – essentially allowing for the potential loss of forest by planting more trees than they sell credits for, and basing that set-aside on the perceived risk of damage.

“This is the first forestry-sector project to be validated under the VCS, and thus marks a tremendous milestone,” says VCS Association CEO David Antonioli. “Kudos to Green Resources for helping to demonstrate that by using the VCS one can generate permanent removals from the forestry sector that are perfectly fungible with other emission reductions.”

The project was initially launched to fund reforestation by generating carbon credits under the Kyoto Protocol’s Clean Development Mechanism. When the protocol was finalized in 1997, however, the only afforestation and reforestation projects it recognized were those that began after 2000.

Green Resources then turned to the voluntary market, but found their efforts to sell offsets from the Tanzanian project hampered by the lack of standards. In 2008, the project was certified under the Forest Stewardship Council’s (FSC) standard for sustainable forest management, but still lacked the kind of pedigree that companies interested in voluntarily offsetting their greenhouse gas emissions look for.

As standards evolved, it became clear that only the VCS could offer that kind of assurance.

“One of the great things about VCS is that it has provisions for early start,” says Jenny Henman, Carbon Offset Certification Manager for Green Resources. “You basically have to prove that carbon income was considered from the beginning and that you had an independent review prior to 2002.”

In negotiations leading up to the Kyoto Protocol, critics of forestry offsets argued that any credits generated by capturing carbon in trees should only be given temporary status because of forests’ susceptibility to fires, pests, and illegal logging. Offset buyers, however, have been lukewarm to-called tCERs (temporary Certified Emission Reduction certificates), preferring instead permanent offsets that don’t expire.

The VCS has chosen to deal with the permanence issue by recognizing forestry credits as permanent if project developers meet certain criteria and then agree to plant a buffer of more trees than they sell credits for.

The Tanzanian project will generate permanent Voluntary Emission Reductions (VERs) over a period of 99 years, with a reserve buffer of 40%.

“This is the first time the risk buffer has been applied,” says Henman. “It’s an interesting process, and the final buffer is linked to things like the certainty of land tenure, measures that you have in place to deal with things like fire and pest control, your relationship with the local community, and the political stability in the country.”

Green Resources submitted its project for validation almost as soon as the VCS guidelines for AFOLU were released in 2007. It’s not clear how many others did the same, but those that did will be coming to light over the next few months.

TÃƒÅ“V Sí¼d has already validated a second reforestation project, and Sebastian Hetsch, the TÃƒÅ“V Sí¼d auditor who validated the Tanzanian project, says others are in the works.

“This shows that the voluntary market is attractive for project developers, and that it works,” he says – adding that it’s still more profitable for reforestation and afforestation projects to go the CDM route if they can.

“We have other forestry projects, but they started after 2000, so we are going for CDM,” she says. “We would, however, definitely look to VCS for other categories of forest project type – like REDD (Reduced Emissions from Deforestation and forest Degradation) or Improved Forest Management, which allows for enrichment-planting and forest restoration.”

The second reforestation project to be verified under VCS is in Pucallpa, Peru, and was developed by Sustainable Forestry Management (SFM Ltd), which owns the emission reduction rights and manages the carbon, along with SFM-BAM, a joint venture between SFM and a local Peruvian company that owns the land and is in charge of implementing the project, together with local non-governmental organization Asociacií³n para la Investigacií³n y Desarrollo Integral (AIDER), which provides technical support.

Both projects have applied for additional validation under the Climate, Community, and Biodiversity Standards, which ensure that projects not only sequester carbon but provide support to local communities and promote biodiversity.