Mongolia’s GDP is set to surge as mining interest move into the country in a big way, but its agriculture sector is suffering in the wake of unsustainable practices that use up topsoil and contribute to climate change. One program aims harness the carbon markets–and the mines–to promote sustainable herding and reduce carbon emissions. 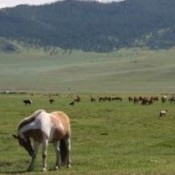 Mongolia’s GDP is set to surge as mining interest move into the country in a big way, but its agriculture sector is suffering in the wake of unsustainable practices that use up topsoil and contribute to climate change. One program aims harness the carbon markets – and the mines – to promote sustainable herding and reduce carbon emissions.

Ninth in a Series

15 November 2010 | The right financing changes everything.   This is what participants in the Investment Fair at the International Conference on Agriculture, Food Security and Climate Change at the Hague sought two weeks ago.

A participant in the fair, the Mongolian Society for Range Management (MSRM), supported by the Green Gold Pasture Ecosystem Management Programme, makes it possible for Mongolia’s herder community to restore degraded pastures by connecting them to finance for sustainable land management in the carbon markets.   The Pasture Ecosystem Management Project was developed in response to Mongolia’s steadily overgrazed and eroding pastures (among the largest in the world) — and in preparation for the dramatic changes that are about to happen to this land-locked country.

Today, 41% of Mongolians make their living as herders of sheep, horses, cattle, goats and yaks, ranging over the country’s vast grasslands that cover 70% of the national land area.   But the national GDP, long based on herding and agricultural products, is preparing for a dramatic turn.   Next year, it is expected to double as the mining of mostly untapped natural resources — such as coal, gold, silver, copper, uranium and zinc — expands dramatically.

Enkh-Amgalan Tseelei, the project manager from MSRM, wants to make sure the herders are not forgotten.   The purpose of the project is to “implement a carbon finance project to combat pasture desertification and restore pasture productivity in Arkhangai aimag (province) located in Western Mongolia.”

“For Mongolians, pasture is really green gold: socially, ecologically, culturally and economically,” says Tseelei. “It really is the basis for our existence.”

Currently, that pasture land is threatened: 70% of it has gone through desertification.   While the government is attempting to address the fact that 60% of the population is below the poverty line, Tseelei says its methods are not the most beneficial for herders.   “The government policy was not really appropriate for the issues that herders were facing,” she says.

She thinks that this project can act as an example for the government that typically sends cash handouts and disaster relief to aid the nomadic herding communities. Temporary solutions, like the government purchase of expensive animal feed from Russia during the winters, solves little, she says. Instead, Tseelie advocates that the government set policies and extend financing to build up herders’ ability to raise their own income and manage their resources to maintain their productivity in future generations.

In response to economic hardships, many of the herders increased their stock of animals, leading to overgrazing and poor quality meat and an undeveloped dairy sector.

“It is a classic tragedy of commons, herders would like to earn income and get out of poverty,” says Tseelei, “but this is done at the cost of the pasturelands.”

She explains that beyond simply being herders, they need to learn how to be entrepreneurs in a market economy.

“Everyone used to be employees of a state company and now they are responsible for everything themselves; herders are at a loss now,” says Tseelei.

In addition, these herders must deal with the hardships of climate change, which is accelerating the rate of desertification and decreasing the productivity of animals as they adapt to cold.

Protecting the Livelihoods of Mongolian Herders

The establishment of Pasture User Groups (PUG) is at the core of this project.   Each herder has the opportunity to engage with this group and assist in determining rules for their local area. Large and small herders will have equal rights in these PUGs, assuring that neither group has too great an influence.

During monthly meetings, the PUGs will develop community-based management structures, increasing cooperation and providing an opportunity to develop pasture and land management plans.     “All the herders in the groups have to follow the rules and become part of the pasture,” says Tseelei.

The practices specified in this plan include: grazing management on natural pastures, rotational grazing, designation of winter-spring reserves, the resting of degraded grasslands and a limit to the number of livestock will be included as aspects to these plans.

While the state law does not recognize the ability of herders to exclude anyone from pasture land—which is mainly state owned—Soum (county) governors can utilize county laws to approve the MSRM project.   These governors will have final approval on each PUGs’ land management plans.

Beyond assisting with developing better practices, the MSRM will assist PUGs in developing mutual aid societies.   The concept is that each herder will provide a small cash payment, as little as $25, to a fund managed by village level associate pasture groups.   From this savings fund, herders can borrow at a 3% interest rate.   In essence, this is an affordable financial source—unlike high interest bank loans.   These provide the farmers financial support through the long off-seasons.

“In brief, (the project) protects the long-term interest of the ecology through short term economic needs, combining them both,” says Tseelei.   “The PUG is based on the notion to protect, introducing proper grassland management.   We support this institution through meeting economic needs.”

MSRM will be a part of each step in this process, establishing the PUGs and offering support as they develop land management plans.

Where’s the Beef for Carbon Investors?

Sustainable land management and the resulting rehabilitation of overgrazed pastures can, according to a pre-feasibility analysis, yield increased soil carbon sequestration and emissions reductions from efficient livestock management.

MSRM is currently seeking a carbon investor that will support the project development, issue carbon payments and sign an Emission Reduction Purchase Agreement with MSRM.   This partner will also assist in the development and implementation of the carbon validation and verification.

The income from carbon reduction will be directed to the village-level groups to provide collective benefits.   “We can channel these resources through the PUG institution model so economic incentives are channeled through this institution and village level associations,” says Tseelei.

Though the PUG will disseminate the funding, each institution involved in the project will be responsible for an aspect of carbon emission reduction.   Beginning at the local level, PUGs are responsible for implementing grazing practices and fodder production.   Soum-level NGOs will monitor carbon services, surveying activity and production of the herders.MSRM then will supervise this carbon monitoring and assist with the implementation of improved management activities.

Benefitting the Environment and the Economy

MSRM hopes that they can transform these sustainable practices into cold-hard cash for the herders seeking to partner with them.

At first glance, reducing herd sizes may seem like a good way to decrease one’s income.   But with the help of the MSRM, the herders will be rewarded with supplemental income and a higher yield on the products they sell.

This model, Tseelei believes, will exist as an example for the government, providing a way to channel the assistance through the herder community in a way that will encourage better management of the grassland and decreased stocking rate.   Though the herders will still have a choice not to participate, the project offers specific economic incentives.

For example, understanding and instituting the best feeding and processing practices in the dairy sector can increase the pastoralist’s income by 200 to 500%, according to one study of the dairy product processing activities.

Additionally, a Payment for Ecosystem Services scheme could provide supplemental income, as the change in practices will lead to higher quality soil and decreased carbon emissions.   MSRM is still seeking investors to purchase these carbon credits.

MSRM is also considering how to best work with the expanding mining business, which is currently 22% of the GDP and includes both foreign and domestic investors.   While this could involve carbon credits, it could also include other aspects of the land management projects.

For the long-term, Tseelei and her team believe the herders must find a more direct route to the expensive boutiques in Milan, Paris and New York who sell their cashmere wares and other animal products.     With the decreased number of stock and adoption of more sustainable practices, the product they produce will be of higher quality and value.   MSRM and the PUGs will then be able to market these products to a higher end market.

When the products are marketed, they will be showcased as natural and environmentally friendly.   MSRM is hoping to include that they are carbon certified, a key aspect of the project.   In addition, instead of sending these raw materials to Chinese manufacturers, MSRM would like the manufacturing to take place in Mongolia.   This would shorten the supply chain and increase the profits for the herders.

Even when the accumulation of carbon in the soil slows and eventually stops over time, the increased value of their products may lead to longer-term sustainability for the herders and the environmentally-friendly practices despite a decline in carbon payments.

However, the challenge still exists that they do not have a connection to the higher market.   Since Mongolia’s products are not known at the international level, Tseelei says they need experts to connect them directly with these higher-end markets.

Tseelei sees this conference in the Hague as a good first step for connecting carbon emissions and agriculture, but she hopes that the momentum gathered here will not be lost.

“Everyone is totally committed, from organizers to participants, to really make some product out of this,” says Tseelei. “People have realized that we have really little time left and that we need to get into more action.”

She has learned from the other participants, meeting individuals who have had longer-term experience with grassland management.

“At the same time, it’s not just speeches,” says Tseelei.   “It’s a chance to meet some real investors.”   Indeed, she was able to meet companies and individuals that have expressed interest in the project.

Hannah Kett is an editorial assistant with Ecosystem Marketplace and a free-lance journalist focused on the non-profit sector. She can be reached at hkett@ecosystemmarketplace.com.