The Carbon Disclosure Project created an incentive for companies to examine and disclose their carbon footprints – an act that often leads them to realize how easy and economical reductions can be. Can the Forest Footprint Disclosure Project do the same for deforestation? 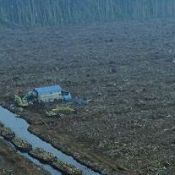 22 June 2009 | Andrew Mitchell finds inspiration in Mad Cow Disease – or, more accurately, in part of our response to it.

“We showed you could track a piece of beef from a farm in the country, through a slaughterhouse, to a butcher,” he says. “It’s not hard to do once people are properly motivated.”

Mitchell, who heads the Global Canopy Programme, also chairs the steering committee for a new endeavor called the Forest Footprint Disclosure Project (FFDP). He hopes the FFDP will make it possible to label the deforestation impact of beef that comes from tropical areas – as well as for four other “forest risk” commodities (timber, soya, palm oil and biofuels). The FFDP takes a cue from the nearly ten-year-old Carbon Disclosure Project (CDP), which has built the world’s largest database of corporate climate-change information by asking companies to come clean about their greenhouse gas emissions. The FFDP hopes to build a database of deforestation impacts by asking companies to come clean about where they get their raw materials, with the goal of identifying which companies have the most exposure to “deforestation risk” and which have the lowest.

To entice companies into participating, investors worth £1.3 trillion have signed a letter urging FTSE 100 companies to fill out the disclosure documents FFDP will be sending them between now and the middle of July. “By demonstrating their sustainable business model, the intention is that they will attract more confidence and – eventually – more investment from the financial community,” says project manager Steven Ripley.

The Benefits of Transparency

Before merging with Bank of America, Merrill-Lynch was a lead global sponsor for the CDP, but it has not yet invested in the FFDP. Karmali says that’s partly because the merger has taken the bulk of their attention, but also because they’re waiting to see if the team develops number-crunching methodology that yields trustworthy numbers. “We’re at a very early stage of understanding about just what kinds of impacts participation in the forestry commodity area has on rates of deforestation,” he says. “Companies that are involved across the value chain in timber, palm oil, soya, beef, and biofuels know very little overall about the links between their activities and deforestation.” If the project brings those links into the light of day, the next step would be to create financial instruments like those based on the CDP’s Carbon Disclosure Leadership Index (CDLI) or Merrill Lynch’s Carbon Leaders Europe Index, both of which aim to channel investment funds into low-emitting companies by highlighting their carbon risk. “With the CDP, we have launched financial products that try to distinguish between companies that we expect to be winners and those we expect to be losers in terms of their differing carbon risks and responses to those carbon risks,” he says. “It’s too early to know whether we’ll be able to develop similar products for distinguishing among companies’ forestry-related risk.” Data from the FFDP would likely be a key input into such a product, but the challenge of creating reliable indexes based on forest carbon is significantly more complex than developing an index based just on carbon alone. “Activities in the forestry value chain include impacts on carbon emissions, biodiversity, indigenous peoples, and rural income,” says Karmali. “There is also the challenge of understanding the links to land use planning and the degree to which options selected now preserve or close off other choices for utilizing land.” The scheme is being funded by the UK Department for International Development, The Prince’s Rainforest Project, and other non-profit organizations.

Steve Zwick is Managing Editor of Ecosystem Marketplace. He can be reached at SZwick (at) ecosystemmarketplace.com. Please see our Reprint Guidelines for details on republishing our articles.