A new standard aims to carve out a space in the voluntary carbon market for projects that empower women by getting them involved in carbon offset and renewable energy project development. The standard puts women in control of the income generated from the credits giving them the opportunity to invest in several poverty alleviating initiatives such as education and health care. 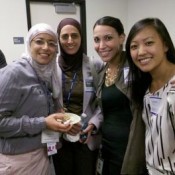 A new standard aims to carve out a space in the voluntary carbon market for projects that empower women by getting them involved in carbon offset and renewable energy project development. The standard puts women in control of the income generated from the credits giving them the opportunity to invest in several poverty alleviating initiatives such as education and health care.

18 April 2013 | In an effort to empower women in developing countries, one organization is adding another standard to the carbon mix that aims to use the revenue from carbon credits to improve their livelihoods.

Jeannette Gurung, a forester and gender equality expert, founded Women Organizing for Change in Agriculture and Natural Resource Management (WOCAN) in 2004 after coming to the conclusion that she and other women in the field who wanted to develop useful programs for poor, rural women were being constrained by their own institutions. WOCAN targets and works with institutions to change the attitudes and behavior emanating from gender bias in the agriculture and natural resource management sectors.

“In a nutshell, the story of my career has been being a woman trying to integrate gender equality issues and women’s empowerment activities within a sector that doesn’t really care a lot about that,” she said. “It’s been about 30 years of struggle.”

WOCAN’s latest effort, publicized this week at the Navigating the American Carbon World conference in San Francisco, is to create a women’s empowerment carbon standard. The new social standard would certify the benefits of increasing women’s participation in carbon offset and renewable energy project development and endorse projects that create increased direct or indirect economic benefits for women.

The idea driving the new standard is to use the voluntary carbon market to provide social and economic benefits to empower rural women through climate change and adaptation activities.

“I came to understand that climate change mitigation is an area that’s considered a no-go for women,” Gurung said. “Whatever little discussion there is around gender and climate change is limited to adaptation aspects. I think that’s because of the perception of women as vulnerable, as victims, as charity cases that need help. In my world, nothing could be farther from the truth. Mitigation is associated with technology and business and entrepreneurship and none of those terms are what people associate with poor, rural women. There’s the disconnect.”

The certification will examine six core elements: assets and income – allowing women to be empowered by controlling their own assets — health, food security, time and leadership. The project does not have to meet the standard’s requirements on all of the elements, but must receive a score of 51 points or higher to receive WOCAN’s stamp of approval.

The women will be empowered because they are the rightful owners of these carbon credits and can use the revenues as they see fit, perhaps for literacy or health care programs, Gurung said.

The effort has received the support of the Asian Development Bank (ADB), which has financed pilot projects in Cambodia (biogas digesters), Laos (improved cookstoves) and Vietnam (waste management). “They were reluctant,” she said. “They think this is a risky thing. But they decided to take it on and put a few million dollars behind it.”

The ADB-financed effort, called Harnessing Climate Change Mitigation Initiatives to Benefit Women, aims to facilitate a more secure livelihood for women by using modern technology to reduce the amount of time women are spending on obtaining fuel wood and giving them access to cleaner energy sources and safer environmental conditions.

“Why we find this so exciting is we really find it transformational for women,” Gurung said. “No longer do they have to go to the forest to cut, which is a difficult, physically demanding job. They don’t have to stand in a dirty-smoke filled kitchen.”

WOCAN’s leaders are not concerned about the possibility for “standard fatigue,” despite the numerous standards that already exist for emissions reduction projects through existing organizations such as the Gold Standard and the Verified Carbon Standard.

In contrast, Gurung has been told that the organization will never have enough projects to satisfy demand from potential investors for a popular product that will combine green investments with benefits for women. “That’s something encouraging,” she said.

Gloria Gonzalez is a freelance reporter.