A new global climate-change regime is years away, but governments around the world are leveraging voluntary tools developed by the private sector to incubate climate-change solutions.  A new Ecosystem Marketplace report takes stock of the 13 most advanced efforts, and offers a glimpse of the carbon markets of tomorrow. 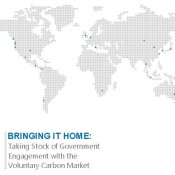 A new global climate-change regime is years away, but governments around the world are leveraging voluntary tools developed by the private sector to incubate climate-change solutions.   A new Ecosystem Marketplace report takes stock of the 13 most advanced efforts, and offers a glimpse of the carbon markets of tomorrow.

1 March 2012 | The United States has famously failed to develop a strategy for slowing and adapting to climate change, but that hasn’t stopped the US states of Oklahoma, California, and Oregon from creating frameworks to support greenhouse gas (GHG) emissions trading.

All three are among more than 20 national and sub-national governmental agencies around the world that have incorporated voluntary climate-change solutions into their formal strategies – creating in the process a means of developing the tools and procedures that will be needed in a low-carbon economy.

Ecosystem Marketplace has profiled the 13 most advanced initiatives in a new report entitled “Bringing it Home: Taking Stock of Government Engagement with the Voluntary Carbon Market”, which grew out of a meeting of national governments and carbon market participants that was convened by the International Emissions Trading Association’s (IETA) International Carbon Reduction and Offset Alliance (ICROA) and the Carbon Markets & Investors Association (CMIA) at year-end climate talks in Durban, South Africa.

In an approach that many believe is more realistic and sustainable than the top-down methods pursued by the United Nations Framework Convention on Climate Change (UNFCCC), the regional efforts are evolving with regional realities in mind.

In Oklahoma, for example, participation is voluntary, and the government limits its role to certifying the companies that verify emission reductions and nurturing agreement on how to measure the types of GHG reduction projects likely to be pursued in the state – such as grassland management and climate-safe farming.

California and Oregon, on the other hand, have implemented mandatory emission caps, but in a way that incorporates elements from long-standing voluntary programs.   California is even in the process of selecting a voluntary-market registry to keep track of credits once they are issued.

Nine of the 21 programs identified in the report emerged just in the last four years, and three of the 13 programs profiled in the report – California, British Columbia and Oregon – use offsetting tools that were developed for voluntary actors to underpin regional GHG regulations. Several other nations are not be far behind, including Costa Rica, the Republic of Korea and most recently South Africa – which could consider allowing offsets of voluntary origin for use under its proposed carbon tax.

“In a few short years, governments have shifted from skepticism to acceptance of the voluntary carbon offset market as a valid complement to regulation,” says Ecosystem Marketplace’s Carbon Program Manager Molly Peters-Stanley. “Some voluntary programs are even writing the rules for regulated carbon markets as governments outsource a growing list of market functions to independent bodies – leaning on their accumulated experience with carbon offset projects.”

The study finds governments have moved beyond their traditional role of providing oversight for voluntary offsetting programs to now performing services ranging from the certification of projects and development of methodologies that reduce greenhouse emissions – to registering offsets and educating buyers.

“Many of these programs are both unique and innovative, but have gained very little attention globally. We analyzed these various government programs with the goal of highlighting and clarifying their domestic efforts to reduce greenhouse gas emissions,” explains Ecosystem Marketplace Director Katherine Hamilton. “In many cases, governments are setting up trading programs not only to support corporations and citizens seeking to offset emissions, but also as a means of testing carbon trading as a regional compliance tool.”

So far, the efforts seem to be winning the confidence of buyers: prices for offsets generated under such programs averaged $11 per ton of carbon dioxide equivalent (tCO2e), compared to a global average of $6 per ton, according to Ecosystem Marketplace’s 2011 State of the Voluntary Carbon Markets report.

Several of the national governments profiled are also party to the World Bank’s new Partnership for Market Readiness, a capacity-building trust fund to assist developing countries that wish to take on GHG reduction targets. Beyond implementing national pilots to engage the private sector in carbon offsetting, some of these governments also view their “voluntary” programs as the first step toward developing national climate action plans and regulated carbon marketplaces.

Steve Zwick is Managing Editor of Ecosystem Marketplace. He can be reached at [email protected].Please see our Reprint Guidelines for details on republishing our articles.