More than 75% of Ecosystem Marketplace readers responding to a recent survey believe the global economic slowdown will hurt voluntary carbon markets in the short term (although the big news may be that 11% believe the slowdown will actually help), while just over 50% believe it will harm the compliance markets. Still, more than two-thirds of practitioners responding have not altered their business plans. 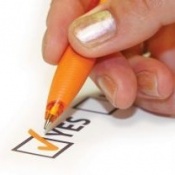 More than 75% of Ecosystem Marketplace readers responding to a recent survey believe the global economic slowdown will hurt voluntary carbon markets in the short term (although the big news may be that 11% believe the slowdown will actually help), while just over 50% believe it will harm the compliance markets. Still, more than two-thirds of practitioners responding have not altered their business plans.

14 November 2008 | Ken Sanchez says he’s been enjoying the peace and tranquility of the past few months, but he doesn’t like the implications.

“It’s scary-silent out there right now,” says the US Fish and Wildlife Service’s Assistant Field Supervisor for Sacramento – the man local real estate developers often end up calling when they need to buy species offsets to mitigate habitat destroyed by new development.

As economic development slows, so for the most part does environmental degradation – and, with it, demand for environmental offsets. But is it as simple as all that?

A few weeks back, we asked our readers to tell us how they think the global banking crisis will impact the biggest environmental market of all: carbon – both voluntary and compliance. We got a smaller response than we hoped for, but it seems to be a high-quality and knowledgeable batch: nearly half of the respondents (47%) were project developers, and just over 11% were intermediaries, while the remainder were mostly journalists, researchers, financiers, and compliance buyers.

The overall mood could be summed up as in synch with common wisdom: short-term glum but long-term optimistic for carbon markets, and overall pretty upbeat for the environment in general (often, however, because economic slowdown tends to mean reduced emissions).

Voluntary Carbon: On the Ropes?

A whopping 77% of respondents said they believe the voluntary carbon markets would suffer as a result of the apparent global recession, while the remainder split evenly between those believing there would be no impact and those believing the markets might actually benefit.

“Economic distress tends to clear the mind,” wrote Richard Wineberg, President of Chicago-based Terra Firma Carbon (and quoted here by permission – other respondents chose to remain anonymous).. “When and if that happens, folks will regain their critical thinking ability and conclude that sustainable energy and climate policies are the better future – engendering massive employment and displacing our current fears (i.e. terror, etc.) with the much more healthy concern over global climate and energy-related issues.”

Pessimists, obviously, had less faith in the clarity of human thought:

“No money to try innovative solutions,” wrote one, while another said, “The voluntary market is essentially a charity, and charity donations are amongst the first things to go in a recession.”

Many were bearish on carbon markets, but not on the environment. Some made the “economic downturn as conservation” argument, while others said carbon markets were simply the least cost-effective environmental measures in a downturn.

“The leaders in the voluntary market I have surveyed expect a major downturn for at least 3 years,” wrote one. “During tough economic times, voluntary offsets are a luxury – particularly for the biggest OTC buyers: large utilities. Further, these utilities will likely invest more in conservation and renewable energy as they more clearly affect their bottom line.”

Others echoed that sentiment, but saw voluntary markets rebounding as governments implement a sort of cap-and-trade lite:

“The US has already indicated concerns that climate responses will become a lower priority in the current financial climate,” wrote one respondent. “However, investors who are reluctant to commit to existing market outlets are desperately looking for new opportunities that will have strong policy support and security. It is virtually certain that the US will establish some kind of cap-and-trade system that will strengthen and exponentially expand the carbon market and stimulate an influx of new buyers, and it is highly probable that this system will principally emphasize the voluntary markets. So, while buyers may be scarce at the moment, it is likely this will change in the next 12-24 months as market confidence returns and investors look for promising new opportunities.”

Here, the argument of recession as environmental salvation rang most loudly, presumably because companies that buy offsets to meet a legal mandate are those likely to see their emissions plunge on their own when the gears stop turning.

“In a credit crisis, it seems likely that polluting industries that would otherwise expand and buy up more credits will instead hold their own or shrink as consumers get scared and buy less energy, fewer cars, etc.,” wrote one respondent.

Others pointed to a lack of public will.

“Several European countries are already demanding postponements or revisions to GHG regulations,” wrote one. “Until some sense of prosperity and economic security returns for a majority of the middle class in the United States, the US Congress will not pass a law to regulate greenhouse-gas emissions.”

We asked about public will in the survey as well, asking respondents to tell us how they felt about certain statements, such as:

Governments will be unwilling to take measures perceived as being hard on the economy in an economic downturn.

To this, 47% said they “strongly agreed”, while 41% said they “agreed.” That’s 88% – well above both the 53% who see the downturn damaging compliance carbon and even above the 77% who see the downturn damaging voluntary carbon. The reason for the apparent discrepancy: many said that even skeptics will stop complaining about cap-and-trade as being bad for business if reductions fall on their own.

“It’s a repeat of parts of Eastern Europe,” wrote one respondent. “They beat their reduction targets because the economy fell apart.”

A large majority also said they either strongly agree (24%) or agree (65%) with the following:

Potential buyers themselves will be unwilling to dig into their pockets during an economic downturn.

We worried that all the attention focused on the role of innovative markets in the housing bubble and bust would lead the public and governments to overreact against markets in general, but 53% of respondents disagreed with the following:

Markets in general will be held in disrepute.

Only 35% agreed, while the remainder was split between ‘strongly agree’ and ‘strongly disagree.’

“If anything, the markets were gaining in repute before the latest meltdown and they should recover over the next five years,” wrote one respondent. “This downturn will also weed out the marginal and/or ‘bad actors’, further strengthening the industry. On the other hand, there is no question that buyers of all stripes will have smaller appetites.”

Added another: “Markets aren’t going away, and neither is global warming. The logic of carbon trading—that it drives investment to the least cost reductions—will continue to be compelling.”

The Role of Government

Most environmental markets require a strong and visible governmental hand, and here a whopping 63% of our respondents said they agreed with the following sentence:

Yes, people will expect more from government and less from the private sector moving forward.

Whether that leads to properly-functioning environmental markets, however, is another question.

“It will depend on how and what percent the government is going to get from the pie,” wrote one respondent. “The case in my country (he didn’t specify where he is, but we can guess) would likely be the opposite, since local people do own most of forest land and it will be (they who) would receive better financial returns compared to tax that would be collected.”

Despite all the doubts and concerns, between 60% and 70% of those responding who identified themselves as market participants said they would not change their business plans, even in the short term (the exact number is difficult to pin down because not all respondents identified their function).

For some, the decision to tough it out is clearly mission-driven. One, for example, argued that, in a downturn, desperate people are more likely to chop down their forests for other uses – and carbon offsets are needed to prevent that from happening.

“As someone who implements Eco Forestry and is directly involved with resource owners, I believe that…an economic downturn would also effect timber prices, and that would encourage resource owners to turn to destructive developments,” he wrote. “By combining both (carbon offsets and forestry), people would financially save, and that would maintain forest areas, whether natural or plantation.”

Many others see the downturn as a chance to stock up valuable resources when prices are low.

“While the immediate impact will be felt in ways both obvious and unpredictable, the longer term trend will not be affected,” wrote one. “Ecosystem markets are a response to real demand for services provided by natural systems that are in increasingly short supply. This won’t be changed by the credit crisis.”

Many of those looking to make changes say they will move into more traditional spheres of environmental protection.

“I may slow project development to spend more time advocating sustainable public works projects and policy,” wrote one – implying that he will not abandon the field completely. Indeed, even those who say they will be scaling back wrote more about using the slowdown to build a base than to abandon the ship.

“My focus right now is on strengthening the dialogue and trust between buyers and sellers,” said one, adding that he would focus “particularly on building the capacity of the sellers – those who have legal and traditional responsibility for the resource base – to inventory, manage and sustainably market the ecosystem services within their jurisdiction.”

Feel free to tell us your views on this and other Ecosystem Marketplace stories. We welcome your feedback at [email protected].