Pope Francis last week implored Catholics and non-Catholics alike to abandon consumerism and defend God’s gift of nature from the ravages of climate change. It’s a powerful call to action, but he gave short-shrift to one of the most effective tools in the emerging arsenal at our disposal: namely, carbon offsetting. 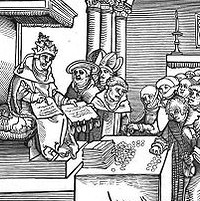 22 June 2015 | As twilight crawls across the steep slopes of Kenya’s Aberdares Hills, a mother kneels on her home’s earthen floor to fan the flames licking out of a chimney-like contraption. Where most people would see a block of bricks, she finds freedom. The more efficient “stove” means freedom from her family’s all-consuming demand for firewood fuel and endless miles of walking to gather it. Less time spent gathering firewood means more time to pursue an education. A profession. Less smoke inhalation means freedom to breathe – literally and figuratively.

Seven thousand miles away, a corporate sustainability officer sits across from a man who has just flown into New York City from Nairobi. His company installs efficient cookstoves in Kenya that generate far less carbon dioxide than standard stoves do. His company hired an auditor to verify the project’s climate impacts and earned several thousand carbon “offset” credits for those CO2 reductions. Now he hopes he can recoup his project’s costs by selling the offsets so he can distribute more cookstoves.

The woman sitting across from him represents a Fortune 500 company that generates greenhouse gas emissions, which she assumes will eventually be regulated. Her company needs to account for this future cost of carbon – now.

She’s already set in motion a strategy to slash greenhouse gas emissions by changing their manufacturing process, but what about flights? What about subcontractors? What about unavoidable energy use?

That’s why she’s having this conversation: if she can’t reduce emissions internally now, at least she can neutralize them by enabling less expensive reductions elsewhere through carbon offsetting.

The man from Nairobi is offering an investment in the climate and in sustainable development. It will lower the risk to the forest, empower women, and develop rural livelihoods. And, because of the rigorous process he went through to become carbon-certified, he can actually demonstrate those impacts.

Meanwhile, four thousand miles away at another (probably more ornate) table, Pope Francis is launching a passionate encyclical that calls the world – Catholic and non-Catholic – to climate action.

His 100+ page text indicates his recognition of the monumental crossroads at which decision-makers will pause for year-end climate talks in Paris in December. No longer grappling with questions of “Will they? Won’t they?” so much as “How? And who? And how much?”, negotiators will reveal which governments will acknowledge (“acknowledge” being polite for “pay for”) their contributions to climate change consequences and solutions.
Ahead of this historical crux, the pope directs attention to the church’s desired outcomes, the “shoulds”:  sustainable development, fairness, long-term thinking, and unselfishness. He acknowledges the sheer cost and longevity of the problem in an encyclical that is refreshingly forward about the overwhelming challenge of fixing the climate.

Unfortunately, it also falls back on decade-old, tried-and-untrue critiques of the most flexible means to pay for those solutions when he dismisses offsetting because he believes it doesn’t “allow for the radical change which present circumstances require.” It’s a new twist on the old critique comparing offsets to “indulgences” that let sinners buy their way into Heaven, but it’s a comparison that just doesn’t hold up.

Our research finds tens of thousands of transactions like the one described above – where development objectives are being met through corporate climate responses. For every bad actor – and, yes, they do exist – there are hundreds of people acting in good faith to address the climate challenge.

Overhauling our energy, communications, building, transportation, and communications infrastructure doesn’t happen overnight. It is certainly not cheap. Offsets enable immediate action in the midst of this long-term transition. They are not – and should not be – the sole solution but they are a very necessary part of it. That’s exactly how companies are using them: not “this or that” but “this and that”.

International decision-makers are realizing that with respect to climate finance, it similarly “takes all kinds”. This creativity is critical to craft a pope-scale climate change response, which will cost trillions of dollars – money that no one sector, country, or even hemisphere has at its disposal.

That is why transitioning countries like China and Brazil are bucking the over-simplified paradigm of north-south victimization to make ambitious domestic contributions. It is why organizations like Forest Trends are pursuing public-private solutions like green bonds that attract private capital with public reassurance, to inject real cash into developing country forest protection and sustainable agriculture. It is why Germany and Norway have spent hundreds of millions of dollars in purely-public bilateral finance for Amazon conservation.

It is why carbon offset markets cannot be rejected, because market-based innovations underpin all of these policies as a result of the last decade’s billions of dollars in offset demand. And in the face of the challenges that Pope Francis elegantly describes, no decision-maker should reject proven solutions that bring CEOs, innovators, and at-need communities to the table around real investment in sustainability.

Molly Peters-Stanley is Managing Director of Ecosystem Marketplace, but the views expressed here are her own.

The full findings cited here are available for free in The Bottom Line: Taking Stock of the Role of Offsets in Corporate Carbon Strategies