UN biodiversity talks in Nagoya, Japan, are taking place on many levels this week and next, and some of the more innovative solutions are being presented in the “Ecosystems Pavilion”, which aims to find common ground among different organizations working on biodiversity, desertification, and climate change.  We dropped in on Tuesday’s proceedings. 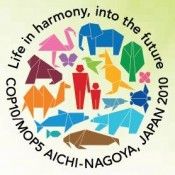 UN biodiversity talks in Nagoya, Japan, are taking place on many levels this week and next, and some of the more innovative solutions are being presented in the “Ecosystems Pavilion”, which aims to find common ground among different organizations working on biodiversity, desertification, and climate change.   We dropped in on Tuesday’s proceedings.

19 October 2010 | As delegates meet in Nagoya to discuss ways of getting money and expertise flowing under the Convention on Biological Diversity (CBD), one of the key areas that they will need to make progress on is how to harness different sources of finance that are available for biodiversity and ecosystem services. The issue of financing biodiversity began in earnest today on the second day of the 10th meeting of the conference of the parties (COP 10) to the CBD.   The first item of the day was a side event at the Rio Conventions’ Ecosystems Pavilion on Protected Area Finance and the afternoon saw discussions on resource mobilization get underway.

Promising Coordination of the Conventions

The Ecosystems Pavilion is a collaboration between the three Rio Conventions which were launched at the 1992 Earth Summit – namely, the conventions on climate change (UNFCCC), biodiversity (CBD) and desertification (UNCCD).   It serves as a platform for raising awareness and sharing information on the co-benefits that can be realized through implementation of the three Rio Conventions. At Nagoya, the Ecosystems Pavilion is hosting a series of events on the cross-cutting issues of biodiversity and climate change.   Today’s event focussed on financing protected areas amidst a day hosted by the IUCN World Commission on Protected Areas.

Broadening the Scope of Biodiversity Finance

Protected Areas are at the heart of any plan to conserve biodiversity.   But we need to think more broadly about finance for ecosystem services and natural capital if we are to truly tackle the issue of biodiversity loss.   Such were the sentiments of many of the panellists and were echoed by Bill Jackson, Deputy Director General of IUCN,.   Jackson opened the side event with a warning that we may need to talk the language of economics if we are to successfully implement a strategy that addresses biodiversity loss.

A key source of “new and additional” finance for biodiversity and ecosystems services are the international mechanisms that have been discussed in both climate and development arenas; namely a financial transaction tax (AKA a Tobin Tax), or a levy on international aviation and shipping.   The difficulty with these mechanisms is that they don’t fall under the mandate of any of the conventions and are therefore politically difficult to implement. One way to overcome this barrier is to follow the lead of the Ecosystem Pavilion and bring together biodiversity, climate change and development agendas to raise finance collectively for these goals.

Coordination at the National Level

The Global Environment Facility (GEF) and CBD’s Lifeweb also plan to play a strong role in coordinating biodiversity and climate finance.   The presentation from Mark Zimsky, Senior Biodiversity Specialist at the GEF, focussed on three key areas: financing for protected areas under the GEF, opportunities to promote SFM and REDD and exploring synergies between natural resource management and adaptation funding under the GEF.   The GEF plans to allocate USD 1.2 billion to biodiversity in the GEF 5 replenishment that runs from 2010 to 2014 and USD 250 million to REDD+ and SFM. A vital question within this strategy will be how the GEF plans to coordinate with other agendas – most notably the UNFCCC who are the main proponents of REDD+.   In answer to this the Mark Zimsky responded that coordination needs to occur at the national level where multiple sources of finance are flowing from what are essentially fragmented source.

Nights at the Roundtable

Jason Spensley, who presented the CBD Lifeweb initiative, echoed this sentiment and highlighted that the roundtable financing discussions under the CBD lifeweb initiative provide an excellent platform for discussions to coordinate finance.   At these multi-stakeholder dialogues participants can determine what portion of finance can be met from various sources including the GEF, national sources, ODA and philanthropy. Both the CBD and GEF pointed to the recent roundtable process in Mexico and Columbia, both of whom were represented at the side event, as an examplar of how this process can help. The roundtable discussions, however, as with finance more broadly under the LifeWeb initiative focus on traditional flows of finance i.e. ODA and philanthropy and don’t necessarily offer a solution for more innovative flows of finance.

The GEF hopes to leverage around USD 750 million in ‘cofinancing’ for it’s REDD and SFM strategy (i.e. three dollars of cofinancing for every dollar of GEF finance). Not everyone agrees with the GEF definition of cofinancing however. The Philippines, supported later by many developing country Parties, clearly outlined concerns with GEF as the primary financial mechanism, namely that co-financing is not leveraging additional finance. Co-financing, they explained, instead places the burden on developing countries to raise the majority of finance, which often comes in the forms of loans from donors. That is not leverage by the GEF; that is a top-up payment. In reality it is best to think of GEF financing as described earlier in the day by Mark Zimisky who explained that GEF covers the “incremental costs to help recipients provide global environmental benefits”.

Charlie Parker is the Head of Policy for the Global Canopy Programme.   His work focusses on forests, climate change and biodiversity. Charlie can be reached at c.parker@globalcanopy.org.
Matthew Cranford is a Doctoral Researcher at the London School of Economics, he works with the Global Canopy Programme on ecosystem finance and can be reached at m.c.cranford@lse.ac.uk.
Together, they co-authored the Little Biodiversity Finance Book, which will be officially launched on Wednesday.