Self-described "manure trader" Peter Hughes made headlines for harnessing water-quality trading to turn chicken dung into fertilizer. Now he wants to bundle payments from various ecosystem services to convert the stinking stuff to fuel for coal-fired power plants. The Ecosystem Marketplace examines the plan – and the pitfalls. 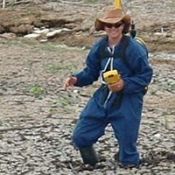 Self-described “manure trader” Peter Hughes made headlines for harnessing water-quality trading to turn chicken dung into fertilizer. Now he wants to bundle payments from various ecosystem services to convert the stinking stuff to fuel. The Ecosystem Marketplace examines the plan – and the pitfalls.

7 August 2008 | After a few swigs of scotch, Peter Hughes got an idea. This manure trader extraordinaire (above right, in his element) was already making money trucking nutrient-laden manure out of the overextended Chesapeake Bay watershed and dumping it onto nutrient-deprived strip mined land.

Removing the guano – and its contaminants – from the watershed paid out in water quality credits, while delivery of fertilizer where it was needed provided another income stream.

But there was so much manure and so little demand.

“We had these long-term credit contracts and I knew we would need long-term disposal sites,” he says, recalling the free-associations that led to his inspiration.

And chicken dung is, well, just that.

According to data extrapolated from the National Association of Development Organizations, Pennsylvania chickens are so prolific in their poop that they excrete enough to power most of the homes within the watershed, a land mass twice the size of Ireland.

To sweeten the deal, Hughes’ market plan includes bundling several environmental trading programs including nutrient trading, carbon offsets and production-tax credits. Thanks to the revenue he expects these programs to generate, he calculates that he could deliver his unusual fuel source for free — turning the fuel’s sale into pure profit.

Knitting together varied environmental markets along with his chicken-dung plans could, of course, be messy. Naysayers disapprove of stacking all these markets together, worrying that so doing could reduce payments for ecosystem services to an accounting game in which the environment loses out. Regulators, meanwhile, say they lack clear directions on how to calculate the effort.

Nonetheless, the value of manure-fueled energy is real. The technology is perfected. And the quantity of manure is certainly plentiful. Ignoring its potential would be, well, like flushing money down the toilet.

The Henry Ford of poop power, Hughes is already an acknowledged leader in this nascent environmental-market movement. The earnest 34-year-old makes a good straight man when speaking about his smelly specialty. But a look at his accounting indicates he may be the one laughing all the way to the bank.

First, thanks to the global energy shortage, dried manure can be up to twice as cheap to burn as oil, Hughes estimates. Next, global warming and other environmental concerns spawned environmental trading programs that could fund the start-up costs for processing this fuel source. And finally, discarded burned manure ash can be turned into fertilizer. This puts purchasing power into every stinking ounce of manure, making it not only environmentally friendly but downright economical.

Meanwhile, gasoline prices doubled over the past year. Americans’ short love affair with corn-based ethanol appears headed for an unhappy ending as food prices bear the brunt of the sudden grain shortfall. And technology to convert often-touted prairie grasses to fuel has not yet been perfected.

But chicken manure is here and it’s ready. Hughes said he anticipates his manure-based fuel –no longer fragrant when processed – will hit the market by 2010.

Nearly anything containing carbon, hydrogen and oxygen can be converted into a fuel source or biofuel, scientists acknowledge. This clearly includes the gassy substance of manure.

In fact, technology to convert manure to energy has been around for decades. In Europe, particularly the Netherlands and the United Kingdom, energy plants have long burned poultry litter to generate electricity.

“This is not rocket science,” Hughes said from his office in Lancaster, PA. “This is stuff people already know how to do.”

But until oil prices hit $70 per barrel, the effort to convert manure to fuel in the United States was not economically competitive. With oil now costing nearly twice that, converting manure to methane suddenly became cost effective.

Adding to poop’s sudden popularity is the US federal government’s anti-global-warming initiative passed earlier this year. It requires that biofuels make up 25 percent of total fuel use by 2022. As a result, manure-fed power plants have sprung up in several states including Connecticut, Delaware and Wisconsin.

In Pennsylvania, where coal is plentiful, Hughes said his company, Red Barn Trading, is negotiating 20-year contracts with three coal-fired power plants to retrofit their plants to burn dried manure as an additional power source. Similar to coal, the burned manure creates steam that turns a turbine that generates electricity.

Getting rid of manure has historically been seen as a problem, not a solution. Officials in Hughes’ home state of Pennsylvania, the nation’s third-largest egg-producing state, long searched for environmentally friendly ways to get rid of mountains of the stinking mess.

Rich in nitrogen and phosphorus, some can be used as fertilizer. But the excess washes into waterways, spawning vast algae blooms. It promotes bacteria growth, consumes the water’s oxygen and causes massive fish kills in the adjacent Chesapeake Bay.

The Chesapeake 2000 Program, an offspring of the Clean Water Act, assigns Pennsylvania and six other states a deadline of 2011 to cut by forty percent the levels of nitrogen, phosphors and sediments that leach into the Bay.

Pennsylvania, by far the largest emitter, decided to promote a relatively new environmental market called nutrient trading to provide part of the solution. Wastewater treatment plants that process human waste can upgrade their plants to minimize their discharges. Or, with nutrient trading, they can offset excess discharges by purchasing credits from upgraded plants or from farms that reduce their nutrient inputs beyond mandated requirements.

Hughes first turned manure into money as a nutrient trader. He trucks dried manure from henhouses on 22 farms out of the Chesapeake Bay watershed and dumps it onto nutrient deprived strip-mined land. He then gets paid as an aggregator for selling the farmers’ nutrient-reduction credits to wastewater treatment plants required to lesson their nutrient load.

At first farmers were wary about offers to pay them for unloading their debris, Hughes said. Their hesitation turned to astonishment when he told them that he could sell it as fuel.
Beverly Hillbillies: Move over

A modern-day Jed Clampett, Hughes struck oil when he realized that he could potentially combine several environmental trading programs to turn dung into fuel.

His company, Red Barn, expects to get nutrient credits for reducing the amount of manure-laden phosphorus that would otherwise leach into waterways. It could get carbon-offset credits for substituting this biomass for carbon-spewing fuels. And the company could also qualify for production-tax credits for not burning fossil fuels.

Hughes plans to again work as an aggregator. This time, he would match wastewater treatment plants looking for nutrient-reduction credits with farmers who accumulated credits and reduced nutrients by turning their manure into fuel.

He also plans to sell carbon-reduction credits either on the United States’ current voluntary market or on the mandatory market many anticipate will be enacted after the upcoming presidential election.

And coal companies that add manure to their feedstock could qualify for production tax credits – nearly two cents per kilowatt-hour for ten years – to cover the cost of converting their plants into renewable energy facilities.

The trading programs, according to Hughes’ calculations, would cover the cost of delivering the manure to the coal-fired plants. Because he is in the middle of negotiations, he declined to say what he will charge for the actual product. But he estimated that for consumers, manure-based fuel would cost half the price of oil.

And that is not the end of the bonanza. Drawing on Red Barn’s origins, Hughes plans to take the phosphorus-rich ash left over from the burned manure, pelletize it and sell it as fertilizer.

Too Good to Be True?

While most investors participate in only one trading program at a time, Hughes plans to cash in on three of them.

His plans to bundle various environmental-offset credit markets sounds great in theory, said Carl Lucero, National Leader for Clean Water at the USDA’s Natural Resources Conservation Service. And Hughes may be successful in doing so. But in general, Lucero said, the infrastructure required to oversee a process involving multiple federal laws such as the Endangered Species Act, the Clean Water Act and the Clean Air Act does not yet exist.

The main problem involves ensuring that a venture such as the one envisioned by Hughes produces environmental savings that would not have otherwise existed.

For example, Hughes plans to remove nutrient-laden manure from the watershed to earn money by creating fuel. But the government created nutrient, carbon and other trading programs to spur additional reductions that would not have happened had the programs not existed. Does Hughes’ single venture produce additional environmental savings in the areas of clean water and clean air? Or, by taking advantage of multiple environmental credit programs does it, in a sense, double dip? And if so, to what extent?

The sooner these issues are worked out, many agree, the stronger these markets will become.

“Currently,” said Lucero, “it’s like someone wants to buy a steak but the farmer has to sell him the whole side of beef. If we bundle, he can sell the roast, the ribs and the ground beef” separately to whomever wants to buy it.

Regardless of whether Hughes succeeds in taking advantage of all or one of the environmental markets available, his plans to turn manure into money appear all but inevitable.

Just look at the math. Already Hughes has access to 22 barns of manure, each of which gets filled with 350 tons of the stuff every six weeks. That’s 7700 tons of manure, enough to power 1,527 homes, according to data from the National Association of Development Organizations.

And that’s just the beginning. As the third-largest egg-producing state in the nation, Pennsylvania could have enough chicken dung to power every home in the state. Moreover, if manure from chicken’ fellow farm animals – cows, turkeys, etc. – were processed, it could generate enough electricity to meet up to three percent of North America’s entire consumption needs, according to Dr. Michael E. Webber from the University of Texas at Austin.

Glenn Carpenter, a national leader for animal agriculture said that “farmers used to think they had too much manure and couldn’t get rid of it.” Just back from a national dairy science meeting in Indianapolis filled with farmers; Carpenter added that “now they see their manure as gold.”