Nature is comprised of interlocking ecosystems, but efforts to preserve nature often fail because they focus on isolated pet problems.  Ecosystem Marketplace examines a project that Defenders of Wildlife hopes will correct that.  The "Conservation Registry" aims to help tens of thousands of conservation projects identify their unique place in the North American tapestry of conservation. 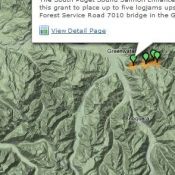 Nature is comprised of interlocking ecosystems, but efforts to preserve nature often fail because they focus on isolated pet problems.   A project launched by Defenders of Wildlife hopes to fix that by helping tens of thousands of conservation projects identify their unique place in the North American tapestry of conservation.

10 march 2010 | When Sara Vickerman walked past the 19 cafes, the famed bronzed tyrannosaurus rex fossil and the replica of Spaceship One in Google’s Mountain View, California, headquarters (AKA the “Googleplex”)   a few weeks ago , she knew the Conservation Registry she helped spearhead had hit the big time, despite enormous hurdles and a slightly misleading name.

Called a “registry”, which in the world of environmental markets would typically infer that it tracks environmental credits and trades, the Conservation Registry instead serves as a massive data base or inventory – the first to put all conservation efforts and projects in the United States on a single map.

It’s been compared to Internet giants Google, Craigslist and Wikipedia.   A look at its evolution reveals its strengths, challenges and possibilities for revolutionizing ecosystem markets as they are now known.

Greg Schildwacher is already a big fan of the project.   A professional conservationist, he says the challenge for emerging ecosystem markets has always been information exchange, and believes the Conservation Registry goes a long way towards meeting this challenge.   He’s pitching in by helping to build a data-base portal for the project that will show conservation easements throughout country.   Investors can then combine information from his portal with that from, for example, an EPA portal and a portal created by a foundation.   With instant access to so much data, they can quickly determine where to locate a wetland bank more likely to succeed because of its proximity to land permanently protected by a conservation easement, what foundations might help fund their efforts and have confidence that their investments will not later be destroyed by upstream development.

Existing databases, in contrast, focus on individual conservation goals, ecosystems or locations.   The Conservation Registry takes these knowledge bases and multiplies them exponentially, says Vickerman, a senior director of the conservation group Defenders of Wildlife. And it lets users know where a project is relative to other projects and landscapes, an issue just as important – and far less understood – than what is happening at a specific site.

She and her staff partnered with various organizations to create the project, which combines and synthesize data from multiple sources using a Google platform already familiar to everyone with a laptop.   It includes market and non-market based projects including governmental, non-governmental and private projects. And it encourages all these groups to build portals such as the one Schildwacher is building to link their information to this collective website to capture multiple ecosystem projects throughout the United States.   It is collaborating with some of the leading registries and data bases including Markit Environmental Registry, which tracks the creation, transfer and retirement of environmental credits, and the Speciesbanking.com database and information clearinghouse on endangered species banks.

The Conservation Registry includes changes in land designation for conservation management such as acquiring and conserving land, designing a refuge or recording a conservation easement.   It includes monitoring, research and education projects tied to a specific location.   And it includes projects that protect or restore habitat, fish, wildlife or ecological processes.   These, Vickerman says, could be as ambitious as replanting thousands of acres of land with native plants, reintroducing endangered species and restoring wetlands or as simple as placing bluebird boxes along a trail.

Because conservation data bases have been program-, agency- or geographically-specific, there has been no widespread analysis and tracking of accomplishments and shortcomings, says Professor Todd BenDor from his University of North Carolina Department of Planning office.

“After you build the best stream restoration project,” he said “the local government could permit Wal-Mart to build upstream from your restored site and destroy it.”

Moreover, while most scientists and environmentalists agree that various ecosystem services such as carbon sequestration, wetlands restoration and wildlife preservation can rarely exist independently from one another, environmental laws and markets typically ignore their interaction.   To preserve ecosystems, says Oregon State University professor Paul Adamus, who helped develop ecosystem credit trading systems, “it is imperative that we consider the relationships among different environmental services.”

Now, with Google offering its expertise, the Conservation Registry is building a massive data base aimed at enabling landowners, investors, regulators, foundations and organizations to understand, for the first time, their conservation options within a global context.   By clicking its website, www.conservationregistry.org, anyone interested can record, search, map and track conservation projects throughout the United States.   They can learn where projects and funding are in greatest need; where partners in conservation can be found and how to get the biggest bang for their buck.

“Cutting-edge applications using Google Maps API, like the Conservation Registry, are great models to follow because they make the most of allowing user-generated content to build up a comprehensive map from the ground up,” says Google Earth Outreach Program Manager Tanya Keen.

Launched in June, 2008, the Conservation Registry was initially released in Oregon, Washington and Idaho.   In less than two years, it has gone national as environmental groups, land trusts and government agencies tap into and add to its information base.

The Conservation Registry acts as a project clearing house that creates tools to connect buyers and sellers.   It gives financiers a panoramic view of potential environmental investments, from wetland restoration to endangered species protection to carbon trading.

While it functions only as a data base recording conservation sites and not as a trading platform, many investors say they value it for its potential to expand ecosystem trading.   The Conservation Registry, says Michael Van Patten whose latest company, Mission Markets, will focus on emerging environmental markets.

“It’s like an advance Craigslist for conservation projects and potential sources of conservation finance,” he says.   “We look at it as a key resource for us.”

Wikipedia for the Environment

Groups buy and create portals, AKA web pages, that share information with the Conservation Registry. Biologist Joanne Stellini, from the US Fish and Wildlife Services’ Western Washington office, helped create a portal that publicizes, tracks and provides a visual representation of the over 50,000-acres her agency acquired to protect endangered species in the past decade.

“This registry makes our work more visible to the public and transparent,” she added.   “It gives the general public, land trusts, cities and governments a place to go.”

The Conservation Registry is already tracking 2,500 projects, Vickerman says, and has another 50-60,000 projects in the queue.   Its biggest challenge, Vickerman says, is posting information.   Information input needs to be cross-walked between the various portals to ensure accuracy and web-search accessibility.

That can be expensive.   The Conservation Registry is supported by grants from federal and state agencies and by private donors through Defenders of Wildlife. But similar to many web innovations, it has yet figured out how to make a profit, Vickerman said.

Yet if the Conservation Registry works as Vickermen’s team envisions, it could do for ecosystem markets what Google did for information exchange.

“We don’t know all benefits yet,” Schildwacher says, “ just like we can’t anticipate all benefits of Google.”


Alice Kenny is a prize-winning science writer and a regular contributor to Ecosystem Marketplace. She may be reached at [email protected]

Conservation Registry Web Site
Markit: Gathering – and Mining – the Data for Tomorrow’s Ecosystem Marketplace
Speciesbanking.com: For All Your Species Needs