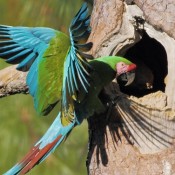 This article was originally published by the American Bird Conservancy. Click here to read the original.

10 September 2012 |   Celebrations over the discovery in Colombia of a new species of bird were short lived when it was revealed that much of its habitat – also the habitat for a threatened macaw – is in danger of being flooded by a new hydro-electric dam project.

The July edition of The Auk – a leading, peer-reviewed ornithology journal – announcing the discovery of the Antioquia Wren (Thryophilus sernai) in the Central Andes of Colombia, came one year into a seven-year construction project for what is to become the largest power station in the country. The nearly $5.5 billion, 738 foot tall Pescadero-Ituango hydroelectric dam will flood 15 square miles of habitat, drowning all six locations where the newly identified bird has been confirmed so far.

Of equal concern is the likely flooding by the dam of habitat for the last colony in the region of the threatened Military Macaw. This spectacular green, red, and turquoise parrot has scattered, sparse populations throughout Central and South America, including one colony 15 miles (25 km) upstream from the dam—well within area targeted for flooding.

“The timing of this discovery of a new species seemingly couldn’t have been worse, especially given the dam project has been in the pipeline for decades and just recently has gotten a green light. Despite the seriousness of the threat to these birds posed by this massive engineering project, here is still some hope to mitigate impacts to the birds,” said Benjamin Skolnik, Conservation Project Specialist for American Bird Conservancy, who oversees the organization’s conservation work in Colombia. “This region of Colombia is a world-class birding tourism destination, and the government understands how valuable birds are to the economy. This may help in the survival of the new wren and the macaw.”

One potential mitigation action that could be taken by the government to aid the new wren is the protection of non-flooded habitat upstream of the dam. If enough suitable habitat is protected as a new protected area, it may be possible to safeguard viable populations of the macaw and wren populations against loss to logging, cattle grazing, and agriculture. Detailed environmental impact studies should explore these possibilities as well as other measures to conserve remaining habitat.

Colombia is home to 1,890 bird species, over 100 of which are threatened globally and 70 of which are endemic to the country. Some of the key species that are threatened are the Santa Marta Parakeet, Dusky Starfrontlet, Gorgeted Puffleg, Chestnut-capped Piha, and Blue-billed Curassow. In addition, the country boasts extensive birding infrastructure such as reserves and lodges. ABC has worked with Fundacií³n ProAves, a leading Colombian environmental group, to establish fourteen such reserves encompassing around 50,000 acres.

“Bird conservation efforts have a history of giving back to local communities for the long haul in a fashion that has been a win-win for all concerned. The conservation programs are helping to not only protect and rehabilitate the land and forests but they also provide improved habitat for birds and other wildlife that ultimately bring in tourism dollars. And we’ve demonstrated a variety of conservation and farming techniques that benefit wildlife while at the same time offer equal or even higher farming returns,” said Lina Daza Rojas, Executive Director from ProAves.

The new wren is predominantly brown and white, and differs from similar species in several ways, including, plumage coloration of the upper parts, the pattern of barring on the wings and tail, overall smaller body size, and unique vocalizations. It prefers patches of dry forest at 820-2,800 feet (250-850 meters) in elevation in the dry Cauca River Canyon, a narrow inter-Andean valley enclosed by the rainforests of the Nechí­ Refuge and the northern sectors of the Western and Central Andes of Colombia.

According to The Auk, the resultant flooding from the dam would lead to the loss of an important area for the conservation of the new wren, precisely in the sector with the least-disturbed dry forests of the region, and where other bird species of conservation concern occur. This new wren is presently known from six localities within an estimated total area of about 650 square miles (1,700 km2), and the extent and quality of its habitat are expected to decline. Thus, the species would be classified at least as “vulnerable” under IUCN (International Union for Conservation of Nature) Red List Criteria.