Carbon offsets financed half of the 8 million clean or efficient stoves distributed in 2012, as high offset prices and corporate demand to enable stove projects drove $167.3 million into the sector. This from a new report by Forest Trends’ Ecosystem Marketplace tracking progress among partners of the Global Alliance for Clean Cookstoves. 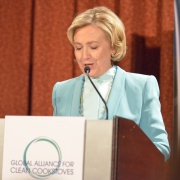 Carbon offsets financed half of the 8 million clean or efficient stoves distributed in 2012, as high offset prices and corporate demand to enable stove projects drove $167.3 million into the sector. This from a new report by Forest Trends’ Ecosystem Marketplace tracking progress among partners of the Global Alliance for Clean Cookstoves.

September 30, 2013 | NEW YORK | “I would be invited into someone’s home, and I would go in and I couldn’t breathe,” former US Secretary of State Hillary Clinton tells of her experience with household air pollution from traditional cooking techniques, at an event held last week marking the third anniversary of the Global Alliance for Clean Cookstoves.

“My eyes were starting to water,” she continues, “I was having trouble because the stove was billowing out fumes which were something I had not had to live with for more than thirty minutes but that the women and children in the home lived with every day.”

In light of her experiences and recognition that an estimated four million people die each year from the use of traditional cookstoves and open fire pits that pollute indoor air, Clinton – alongside donor governments, businesses and NGOs – launched the Alliance in 2010. Its mission? To spur the adoption of more efficient or clean cooking solutions in 100 million households by 2020.

Switching to clean cookstoves can slash hazardous emissions as well as conserve fuel, benefitting both individuals and the environment – a fact not lost on the world’s aid agencies, which have been supporting their distribution as fast as they can afford to.

Because traditional cookstoves emit hundreds of millions of tons of carbon emissions, clean or efficient cookstove distribution projects – which significantly reduce emissions – can access carbon finance as one of several sources of funding that makes distribution more feasible and stoves more affordable.

Leveraging this type of finance has improved stove access to more people who need them. The 2012 Results Report finds that in 2012, 16.9 million carbon offsets were sold from cookstove projects. Of the 8.2 million cookstoves that the report tracked as distributed, 4.1 million received some support from carbon finance, which is up from 15% of all stoves distributed in 2011.

These emissions reductions, belying offset transactions valued at $167.3 million, achieve the equivalent of closing four or five coal-fired power stations for one year.

The report finds that the average price of offsets from clean cookstove projects was significantly higher than the average verified or certified emissions reduction ($9.9/ton versus $3-$5.9/ton in 2012). The authors note that maintaining this above-average price of cookstove project offsets, as well as the number of offsets sold and stoves distributed as a result, hinges on European countries’ intervention in support of more favorable offset pricing in the region’s emissions trading system. Compliance buyers in the European Emissions Trading System picked up around half of all cookstove offsets transacted last year.

The remaining half was purchased by voluntary buyers seeking offsets to meet corporate social responsibility targets or otherwise demonstrate environmental leadership within their industry. Based on new data collected since the June 2013 launch of Ecosystem Marketplace’s State of the Voluntary Carbon Markets report, offsets from clean cookstove projects were the third most popular emissions reduction activity voluntarily supported by the corporate community, after wind installations and tree planting activities.

The report comes on the same day as the UN Intergovernmental Panel on Climate Change (IPCC) released the first installment of its Fifth Assessment Report (AR5), which confirms and refines previous findings and underlines the need to reduce greenhouse gas emissions.

While funding from the carbon market increased last year, it wasn’t the primary source of finance. Other sources of project finance came from government and foundation grants, revenues obtained from the sale of stoves and fuels to end users, individual donations, and multilateral grants.

Private equity investment – and the private sector, generally – also played a significant role in the sector in 2012. This continues in the current year, last week seeing Shell step up to commit $6 million to support the Alliance’s continuation. Deutsche Bank simultaneously announced the launch of a $4 million Working Capital Fund to provide loans and loan guarantees to enterprises that are unable to access traditional forms of debt financing.

On the public end of the spectrum, Clinton also noted that the US State Department commitment to the Alliance and its partners has increased to $125 million over five years, up from her catalytic commitment of $50 million three years ago.

The report also focuses on other issues of concern in the cookstove sector. One of those issues is gender, as women are predominantly the users of cookstoves and therefore the most impacted by the harmful effects of indoor air pollution – and the benefits of cleaner technology and fuels adoption. The report found that most cookstove and fuel programs engaged women with 172 partners prioritizing women’s empowerment in their missions. However, a large number of partners don’t yet collect or didn’t report sex-disaggregated data, which is key to truly understanding the gender dynamics of the sector, the report notes.

Urban and peri-urban communities were the dominant end users of distributed stoves and fuels, representing 33% of recipients/buyers, though rural residents were close behind at 32%. Users receiving stoves as a result of humanitarian aid or living in an emergency aid context made up just 1% of the 8.2 million cookstoves distributed. Report authors note the unmet need for better cooking technologies for the 42 million people living in those settings.