The United States and the European Union both excluded market-based mechanisms to reduce emissions in the national climate plans they submitted to the United Nations. But negotiators say a framework for international emissions trading is needed, even if many countries won’t use it (yet) 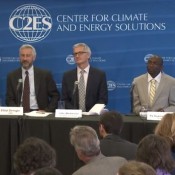 The United States and the European Union both excluded market-based mechanisms to reduce emissions in the national climate plans they submitted to the United Nations. But negotiators say a framework for international emissions trading is needed, even if many countries won’t use it (yet).

30 April 2015 | Implementation, balance, inclusiveness. Those are the three words Gao Feng, China’s Foreign Ministry’s Special Representative for Climate Negotiations uses to describe his hope for an international climate agreement to be negotiated this December in Paris. Speaking on a Center for Climate and Energy Solutions’ (C2ES) panel last week, officials from China, the European Union, Gambia and New Zealand grappled with the question of how market-based mechanisms for emissions reductions might be included in the Paris agreement – among other issues.

Gao is doubtful that emissions trading will be a significant part of an international climate deal under the United Nations Framework Convention on Climate Change (UNFCCC), at least in the short term.

“I don’t see sufficient demand to drive the so-called global carbon market right now,” he said, citing the fact that both the United States and the European Union (EU) – two of the largest potential government buyers – excluded market-based emissions reductions from the first drafts of their Intended Nationally Determined Contributions (INDCs). “If a contribution is to be determined nationally, then in theory you may not have the demand at home because every country may calculate the exact amount that it can do,” he said.

Of the eight INDCs submitted so far, only Switzerland’s and Liechtenstein’s mention market-based instruments that would allow investments in emissions reductions abroad to be counted against a national target. Norway plans to use international carbon offsets only if it cannot secure a collective agreement with the EU. The United States and the EU both took a pass on using international offsets to meet their targets, though their climate plans do not preclude the use of domestic carbon markets to lower emissions.

View the Video, or Scroll Down to Continue Reading

The EU plans to cut emissions 40% under 1990 without purchasing offsets from outside the region. Nevertheless, the Paris agreement should ensure that those countries that want to use carbon markets to reduce emissions can do so in an accountable way, said Jake Werksman, Principal Adviser for DG Climate Action of the European Commission. This would include some kind of regulatory framework to prevent double counting of emissions reductions, he said. (For instance, if Switzerland finances a wind power project in Mexico and then counts those emissions reductions against its total, Mexico could not also count those reductions domestically.)

The European Union launched the EU Emissions Trading Scheme (EU ETS) in 2005 to reduce emissions in the bloc, also providing a mechanism for handling offsets – mostly anticipating the Kyoto Protocol’s Clean Development Mechanism (CDM), which came into effect in 2008, but also to handle offsets from other cap-and-trade initiatives. Entities covered by the EU ETS have historically been the major source of compliance demand for carbon offsets, but oversupply of allowances in the EU ETS has caused CDM prices to plummet below the $1 mark, and a plan to link the EU ETS with Australia’s fell through after Australia repealed its carbon tax.

“We’ve had great experience in terms of running a carbon market domestically, but we’ve had difficulty managing the relationship between that domestic carbon market and international carbon markets in a way that ensures environmental integrity and a good carbon price at home,” said Werksman. “So we’re really focusing on getting our domestic house in order at the moment.”

New Zealand enacted emissions trading in 2008 under its Permanent Forests Sink Initiative, but the market has been so flooded by lower-priced CDM offsets that domestic forest project developers have been hard-pressed to find buyers for their tonnes. Nevertheless, the country is very interested in an international carbon market and would welcome a framework establishing minimum standards and guidelines, said Jo Tyndall, Climate Change Ambassador for New Zealand’s Ministry of Foreign Affairs and Trade.

“In New Zealand’s case we have got some challenges around how much we can reduce our emissions domestically and the ability to purchase emissions reductions elsewhere allows us to be much more ambitious than we would otherwise be able to be,” she said, emphasizing that emissions trading should be a voluntary tool available to governments.

Developing countries that would likely be on the receiving end of carbon offset investments have mixed views on market-based mechanisms. In its INDC, Mexico actually proposes two different targets, committing to a 25% reduction in emissions by 2030 without international assistance, and raising the ante to a 40% cut conditional on “fully functional bilateral, regional and international market mechanisms.”

Other countries, such as Bolivia, oppose market-based mechanisms that allow developed countries to meet targets through offsetting.

The question remains as to how the UNFCCC’s Green Climate Fund (GCF), to which industrialized countries are supposed to provide $100 billion per year by 2020, will distribute its money for mitigation and adaptation. Some funder countries are advocating for “payments for performance” for avoided deforestation and other carbon-cutting initiatives – meaning that the money only flows if the emissions reductions are achieved. (This concept is also central to carbon markets.)

The GCF was capitalized at $10 billion during last year’s negotiating session in Lima, Peru, but it will only be able to start spending if additional contributors meet an April 30th deadline to sign their contracts. The U.S., for instance, said it would not meet the end-of-month GCF deadline due to its budget cycle.

Pa Ousman Jarju, who has the wide-ranging title of being Gambia’s Minister of Environment, Climate Change, Water Resources, Parks and Wildlife, criticized the U.S. for dragging its feet on financial disbursements.

“It’s beyond imagination that the United States of America [would have] people in Congress and some so-called scientists denying what is happening in the world,” he said. “This is money that is going towards really supporting those who are in dire need.”

While the upcoming Conference of the Parties of the UNFCCC has the same objective as before – to limit global temperature rise to no more than two degrees Celsius – the bottom-up approach currently underway is starkly different from the top-down Kyoto Protocol that aimed to limit emissions from developed countries.

“One of the big challenges that negotiators have had in this process is how to describe the agreement that is beginning to emerge in terms of an existing legal format,” said Valli Moosa, South Africa’s former Minister for Environment and the co-chair of C2ES’s ‘Toward 2015’ dialogues. “They’ve found it really difficult to do so.”

“The main difference between Kyoto and what we will see in Paris is that the numbers will not necessarily be in the printed protocol,” said Harald Dovland, the former co-chair of the UNFCCC’s Ad Hoc Working Group on the Durban Platform, and the other Toward 2015 co-chair. “I foresee that what negotiators and parties can agree on is that there will be a core agreement of a legally binding nature but there will be a lot of important material in the supporting decisions, declarations, or whatever [they’re] called.”

Another key difference? After more than twenty years at the table, many negotiators see Paris as their last chance.

“The current generation of chief negotiators – and I know a number of them – they seem to have a sense of mission,” said Moosa. “They know that if we fail in Paris, it will be a big blow in a number of ways. One is that the global climate agreement could then possibly happen outside of the UNFCCC framework.”

A scenario in which a global climate deal was left up to heads of state rather than hammered out under the UNFCCC process “would not necessarily make it easier,” he added. “I am on tenterhooks and extremely worried that this process might not succeed, notwithstanding the fact that all the ingredients are in place for success.”

Allie Goldstein is Senior Associate in Ecosystem Marketplace’s Carbon Program. She can be reached at agoldstein@ecosystemmarketplace.com.