Deforestation accounts for 20% of all greenhouse gas emissions, and the ability of forests to extract carbon from the atmosphere is key to combating climate change by reducing emissions from deforestation and forest degradation (REDD). A new study, however, says that just a slight increase in global temperatures could damage this ability. 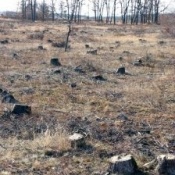 Deforestation accounts for 20% of all greenhouse gas emissions, and the ability of forests to extract carbon from the atmosphere is key to combating climate change by reducing emissions from deforestation and forest degradation (REDD). A new study, however, says that just a slight increase in global temperatures could damage this ability.

20 April 2009 | The ability of forests to act as carbon sinks is “at risk of being lost entirely” to climate change-induced environmental stresses that threaten to damage and even decimate forests worldwide, according to a new report presented at the current session of the United Nations Forum on Forests (UNFF), which runs through the end of the month at the UN Headquarters in New York City.

“Adaptation of Forests and People to Climate Change – A Global Assessment” was coordinated by the Vienna-based International Union of Forest Research Organizations (IUFRO) through the Collaborative Partnership on Forests (CPF), an alliance of 14 international organizations that each has substantial forestry programs.

Authored by 35 of the world’s top forestry scientists, it provides the first global assessment to date of the ability of forests to adapt to climate change and is expected to play a key role in next week’s UNFF discussions. The report presents the state of scientific knowledge regarding the current and projected future impacts of climate change on forests and people along with options for adaptation.

“We normally think of forests as putting the brakes on global warming, but in fact over the next few decades, damage induced by climate change could cause forests to release huge quantities of carbon and create a situation in which they do more to accelerate warming than to slow it down,” said Risto Seppí¤lí¤, a professor at the Finnish Forest Research Institute (Metla) and Immediate Past President of IUFRO, who chaired the expert panel that produced the report.

Scientists hope the new assessment will inform international climate change negotiations, set to resume in December in Copenhagen, where forest-related deliberations thus far have focused mainly on carbon emissions from deforestation. The analysis shows that officials also must consider how the world’s forests are likely to suffer—and perhaps severely—as the earth gets warmer.

While deforestation is responsible for about 20 percent of greenhouse gases, overall, forests currently absorb more carbon than they emit. The trees and soils of the world’s forests are capturing and storing more than a quarter of the world’s carbon emissions.

The problem, scientists say, is that this critical carbon-regulating service could be lost entirely if the earth heats up 2.5 degrees Celsius (4.5 degrees Fahrenheit) or more relative to pre-industrial levels, which is expected to occur if emissions are not substantially reduced.

The study notes that the higher temperatures — along with the prolonged droughts, more intense pest invasions, and other environmental stresses that could accompany climate change — would lead to considerable forest destruction and degradation. This could create a dangerous feedback loop in which damage to forests from climate change significantly increases global carbon emissions which then exacerbate the greenhouse effect.

The warning from scientists that forests are in danger of flipping from a net sink to a net source of carbon emerged from an exhaustive analysis of how different forest ecosystems worldwide would be affected under specific climate change scenarios developed by the Nobel-prize winning UN Intergovernmental Panel on Climate Change (IPCC).

The authors of the report, some of whom also serve on the IPCC panel, noted that the impacts in different ecosystems would vary over time.
In fact, the authors found that the risk of losing forests as a net carbon sink is significant even in relatively conservative scenarios in which countries achieve modest emissions reductions and stabilize greenhouse gas concentrations. The loss becomes much more likely in scenarios where curbs fail to take effect and emissions continue on their current, upward trend.

“Policymakers should focus greater attention on helping forests and the people who live around them adapt to anticipated problems,” said Professor Seppí¤lí¤. “For example, wider application of well-understood sustainable forestry practices, which offer a range of benefits, could help forests avoid some of the damage induced by climate change.”

The study observes that as climate change progresses over the next decades:

• Droughts are projected to become more intense and frequent in subtropical and southern temperate forests, especially in the western United States, northern China, southern Europe and the Mediterranean, subtropical Africa, Central America and Australia. “These droughts will also increase the prevalence of fire and predispose large areas of forest to pests and pathogens,” the study says.

• In some arid and semi-arid environments, such as the interior of the American west, forestry experts worry that climate change could be so dramatic that timber productivity could “decline to the extent that forests are no longer viable.”

• Decreased rainfall and more severe droughts are expected to be particularly stressful for forest-dependent people in Africa who look to forests for food, clean water and other basic needs. For them, the scientists predict climate change could mean “deepening poverty, deteriorating public health, and social conflict.”

• In certain areas, climate change could lead to substantial gains in the supply of timber. The combination of warming temperatures and the fertilizing effect of increased carbon in the atmosphere could fuel a northward expansion of what is known as the boreal forest, the coniferous timber lands that run across the earth’s northern latitudes and include forests in Canada, Finland, Russia and Sweden. Research from the report indicates that climate change could cause more than a 40 percent increase in timber growth in Finland. In fact, the study concludes that the increased growth in boreal forests could be large enough to spur a drop in timber prices worldwide. However, over the long-term, if climate change continues at the current pace the boreal expansion eventually will be offset by an increase in insect invasions, fires, and storms.

The scientists warn that efforts to adapt to climate change may end up providing forests with only a temporary respite.

“Even if adaptation measures are fully implemented, unmitigated climate change would, during the course of the current century, exceed the adaptive capacity of many forests,” said Professor Andreas Fischlin of the Swiss Federal Institute of Technology, who is one of the lead authors of the study and a coordinating lead author with the IPCC. “The fact remains that the only way to ensure that forests do not suffer unprecedented harm is to achieve large reductions in greenhouse gas emissions.”

Forestry experts acknowledge that more research is needed to better understand precisely how climate change will impact forests and how effective different adaptation responses will be. But they say the challenge to policy makers is that they must act even in the face of imperfect data because “climate change is progressing too quickly to postpone action.”