That’s the take-home message in Clive Hamilton’s positively negative “Requiem For a Species: Why we Resist the truth about climate change”, which examines the hard science of climate change and the soft psychology of climate-change denial (as well as climate-change apathy and the desire for a quick and easy fix).  Face reality, he says.  And deal with it – now. 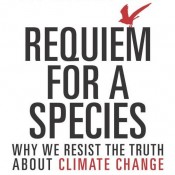 That’s the take-home message in Clive Hamilton’s positively negative “Requiem For a Species: Why we Resist the truth about climate change”, which examines the hard science of climate change and the soft psychology of climate-change denial (as well as climate-change apathy and the desire for a quick and easy fix). Face reality, he says. And deal with it.

1 October 2010 | Anyone even superficially concerned about climate change would do well to read Clive Hamilton’s Requiem for a Species. This highly entertaining and excellently sourced book is part of a new genre investigating a post-global warming world. It bravely calls on us to confront a truth we don’t want to believe: humanity has failed, and catastrophic climate change is all too certain.

Hamilton sets out on a quest to help us better prepare ourselves for unavoidable climate change by analyzing the psychological tendencies of the human species.   And he is well prepared for the task. A professor of public ethics at the Centre for Applied Philosophy and Public Ethics at the Australian National University, Hamilton has already authored several books on the culture and politics of climate change, including Affluenza, Growth Fetish and Scorcher.

This most recent book, “Requiem for a Species,” uncovers the roots of climate change denial and investigates why even those who believe the science continue to live with indifference. Despite humanity’s failure, however, we should not abandon our efforts, he asserts. It’s too late to prevent climate change but not too late for modern society to act to ensure the survival of the human species.   Ethical action – and perhaps revolutionary action – he writes, is our only hope.

“The time has come for us to ask whether our obligations to our fellow humans and the wider natural world entitle us to break laws that protect those who continue to pollute the atmosphere in a way that threatens our survival.”

Scientists estimate climate change will likely warm the world four degrees by 2055, And this four-degree world that Hamilton describes is a scary place.   Melting glaciers will be accompanied by a rise in sea level of at least 25 meters. Floods, droughts, wildfires, cyclones, epidemics and famine will occur with increasing frequency. What’s more, massive population displacement and limited availability of fresh water will conspire with other factors to spark wars between neighboring nations.

It is impossible to read this book without wondering how we arrived at this point and how we can better prepare ourselves for the future.

Hamilton reviews the science and then quickly delves into the reasons we disregard it or deny it.   He attributes inaction among even those who heed climate change warnings to our society’s obsession with growth and rampant consumerism that tempt us with false hopes of social progress and happiness.     This has been reinforced by fossil fuel lobbies and their financial incentives. Consumerism is successful at helping us acquire material goods and form identities.   However, he writes, its promise of eventual happiness fails to deliver. The allure of consumerism is very difficult for modern societies to shake and has prevented us from responding to the impending climate crisis. Hamilton’s analysis of our growth fetish and consumer culture catalyzes the reader to take a hard look at his own life and views on happiness and the environment.

Denial of climate change, Hamilton writes, also grows from our disconnect from nature that has closely followed changing religious views on the environment and our understanding of the world.   The luxuries of modern society instill in us a belief that technology will always save us, no matter the peril. But can it save us from our own hubris?

Hamilton examines climate deniers who seem to accept science when the solution involves further human tinkering with the planet. Think tanks such as the Marshall Institute and the Hoover Institute actively refute the claims of climate scientists but are highly supportive of using geoengineering to save us from the disaster of a changing climate. This blatant act of hypocrisy shines light on an important insight: perhaps what separates concerned citizens from climate deniers is not views on scientific validity but rather “belief about the relationship of humans to the natural world.” In the latter group’s view, reducing emissions admits a human fault and the triumph of nature.Geoengineering, on the other hand, proves our mastery over nature.

Hamilton ponders our options for mitigating climate change and shows how none of the proposed ‘easy way out’ solutions is possible without further serious risks. Specifically, he investigates carbon capture, energy efficiency, alternative energy and geoengineering. Considering there is no clear way out, how can we accept a drastically altered future and move forward?

We must first grieve before attempting to salvage our future, Hamilton writes, being careful not to be seduced by dangerous “unrealistic optimism.” Hamilton offers a method by which this can happen: despair, accept, and act. Simple, perhaps. But moving from intellectual acceptance to emotional acceptance is painful and often crushing. We built our dreams upon steadfast assumptions of our world, but what was once fundamental has been forever changed. We must come to terms with this most unfortunate reality, he writes, by relinquishing our dreams and eventually forming new ones, based on a new future and a new world. Hamilton even conjectures that we may abandon our religious consumerism for the protection of higher celestial gods, mimicking our ancestors of early cultures as we learn to cope with the frailty of our existence.

”Requiem for a Species” draws on Hamilton’s previous work so it’s no surprise that the highlight is his philosophical analysis and citizens’ call to action. The author allows his passion to shine through and offers his refreshingly honest views on how to best influence governments and effect change. He warns that history will repeat itself as it always has. Politicians will act in their own best interest, abandoning the poor and allowing the rich to buy their way out. Our modern elected governments, he claims, have failed to act in the best interest of the people, justifying a new radicalism of vigorous political engagement to democratize survivability.

Hamilton’s philosophical insights are superb but leave something to be desired. The reader would certainly benefit from a deeper and more extensive analysis. The passion evident in Hamilton’s words makes it easy to sense that he has more to say on the subjects of civil disobedience and religion but is possibly holding back. The area could even warrant its own book. Perhaps we will see this from Hamilton in the future.

In addition to encouraging critical and philosophical thinking Requiem for a Species offers an extremely powerful marketing tool. Hamilton draws on research regarding whom to target, which emotions to play on and which ones to avoid. The correct approach is pivotal in appealing to humans to change their consumption habits, lobby for the environment or pay for ecosystem services. The book may also be valuable as a political negotiating tool, helpful in both campaigning and engaging the public in proposed climate legislation.

Human dominance over nature has largely diminished its allure. Our species has mistakenly confused this lack of mystery with a lack of power and the implications are becoming frighteningly clear. After two decades of blasé  attitudes toward climate change and disturbingly little action, Hamilton challenges us to ponder our indifference and accept the dire message of climate scientists. Modern society must rethink its vision for the future, and there’s no better time than now.