Chevrolet is stepping up its efforts to reward US-based schools for renewable energy and energy efficiency projects with a $500,000 boost to the University of Illinois at Urbana-Champaign’s efforts to reduce its carbon footprint. This makes U of I  the third US higher education institution to provide carbon offsets to the company. 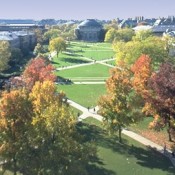 16 May 2014 | In its Illinois Climate Action Plan in 2010, the University of Illinois at Urbana-Champaign committed to lowering its building-related greenhouse gas (GHG) emissions by 15% by 2015 and 100% by 2050. The school’s efforts to reduce its carbon footprint are now receiving a $1 million boost – half from automaker Chevrolet and half from the university itself.

The U of I is joining the roster of US higher education institutions selling carbon offsets to Chevrolet, becoming the third school to engage in a voluntary transaction with the company, following the lead of Ball State University in Muncie, Indiana and Valencia College in Orlando, Florida  earlier this year. The agreement with Illinois to purchase about 150,000 tonnes of voluntary carbon offsets is Chevrolet’s largest college project investment to date.

Chevrolet has been one of the most active and prominent buyers of carbon offsets in the voluntary market in recent years. In 2010, the company voluntarily committed to reduce up to eight million metric tons of carbon and pledged about $40 million to the effort. Chevrolet has reduced about 7.7 million tonnes to date, and the new offset purchases from the US higher education institutions will complete that commitment.

“Turning a university’s energy-efficiency progress into carbon credits enables them to reinvest in even more clean energy technologies,” said David Tulauskas, director of sustainability for General Motors, Chevrolet’s parent company. “Chevrolet is supporting the ingenious ways people are reducing carbon and spreading the word about the benefits of a clean energy future.”

The carbon offsets will be generated via a new methodology developed under the Verified Carbon Standard – an offset registry that supports projects to reduce GHG emissions – to credit university, college and Kindergarten through 12th grade campuses that lower their GHG emissions through energy efficiency and renewable energy initiatives. Chevrolet financed development of the methodology and committed to purchasing and retiring around 500,000 tonnes of offsets from schools through the program.

In a climate action plan released in 2010, the University of Illinois at Urbana-Champaign set targets for reducing building-related GHG emissions: 15% by 2015; 30% by 2020; 40% by 2025; and 100% by 2050. Professor Ben McCall, Associate Director for Campus Sustainability at the University’s Institute for Sustainability, Energy, and Environment, said the campus is on track to easily surpass its 2015 goal.

“Reaching our goal of carbon neutrality by 2050 is going to be a significant challenge that will require an Ã¢â‚¬Ëœall hands on deck’ approach,” McCall said. “Some of the actions we will need to take will be costly, and the Chevrolet funding will help us keep on track toward our extremely demanding goals.

The university’s facilities and services division has improved heating and air conditioning systems in dozens of campus building and utilized energy performance contracting that uses future energy savings to fund efficiency improvements. For the second year in a row, the university was one of 22 institutions of higher learning to earn a perfect score on the Princeton Review’s Green Honor Roll.

“As a campus, we need to do our part to eliminate emissions of (carbon dioxide) into the atmosphere, which is having catastrophic global effects,” McCall said. “But our reach can be so much larger than just our own emissions. We want to be an example to the world and teach our students how to go about emission reductions so other campuses, companies, governments and more can implement these sorts of changes the world over.”

For more on Chevrolet’s voluntary carbon offsetting program, visit the Ecosystem Marketplace website on Monday to read an interview with David Tulauskas.

Higher Ed To Get Cleaner, More Efficient, With Boost From Chevrolet