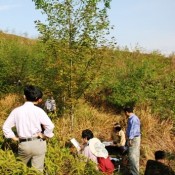 24 January 2013 | As China’s economy evolved and it experienced a period of rapid industrialization, the nation’s environmental problems grew right along with it. Water scarcity and strangling pollution constantly plague the world’s most populous country. But in recent years China is engaging in climate mitigation and adaptation programs to address these problems and the progress they have made is starting to show.

This year, China was able to announce their China Power Sector Transformer Efficiency Program, a PoA (Programme of Activity) under the Clean Development Mechanism (CDM), has issued CERs (Certified Emission Reductions). The program has led to the retirement of 37,000 inefficient power distribution transformers mitigating emissions from the power industry. And with more companies adopting energy efficient transformers, emissions will continue to shrink.

Late last year, China’s Facilitating Reforestation for Guangxi Watershed Management in Pearl River Basin Project issued carbon credits under the CDM. This was the first reforestation project in the world to be registered under the UNFCCC (United Nations Framework Convention on Climate Change).

The Guangxi watershed is one of the most diverse regions for flora in China, but since the 1950s the watershed has struggled with deforestation from fires, grazing and fuel-wood among other reasons. The Guzngxi project has reforested 3,000 hectares with farms in the region practicing conservation. The farms increase biodiversity by improving the habitats and control water erosion along the Pearl River.

The local communities also benefit from the sale of carbon sequestered in the trees. The carbon credits are sold to the World Bank’s BioCarbon Fund as well as products like resin.

The BioCarbon Fund, along with the Forest Carbon Partnership Facility (FCPF) is administered by the World Bank enabling the financial institution to fund projects worldwide that reduce carbon emissions, conserve biodiversity and alleviate poverty.

Outside of China, Costa Rica is also helping move the World Bank into a new phase of carbon finance. The nation is set to become the first country to access performance-based payments through the FCPF’s Carbon Fund. This is the first national program supported by the Carbon Fund-a part of FCPF that supplies countries with payments based on verification of emission reductions from large-scale projects. Costa Rica seeks to be the world’s first ‘carbon neutral’ country and using Payments for Ecosystem Services (PES) to keep carbon locked in trees by keeping forests standing is one part of achieving this goal.

Costa Rica’s proposal would reduce carbon emissions by 29.5 million tons by reforesting and conserving 341,000 hectares of mostly privately owned land. The nation has a history of a PES program that is supported by a 3.5% tax on gasoline and distributes roughly $25 million to 8,000 property owners. The extra finance brought in by the Carbon Fund will allow the program to expand.

Costa Rica and other countries with activities funded by the FCPF were guaranteed continued support this month when Norway, Germany and Finland announced new financial contributions amounting to about US $180 million. That brings the FCPF’s capitalization to US $650 million.

Majority of these new funds will be used for the FCPF’s Carbon Fund.