About 13 million hectares of tropical forests are being lost every year – despite the best efforts of many committed stakeholders. California could take efforts to combat this trend to the next level by allowing projects that reduce emissions from deforestation and forest degradation to count as offsets in its carbon market, according to supporters of these projects. But is the US state ready to take that step? 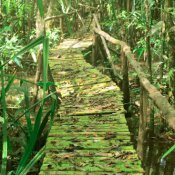 About 13 million hectares of tropical forests are being lost every year – despite the best efforts of many committed stakeholders. California could take efforts to combat this trend to the next level by allowing projects that reduce emissions from deforestation and forest degradation to count as offsets in its carbon market, according to supporters of these projects. But is the US state ready to take that step?

8 April December 2014 | Tropical forests are being cleared, often illegally, to make room for the production of paper and other products, a deforestation trend that is directly responsible for an estimated 16% of greenhouse gas (GHG) emissions globally – more than the 12% caused by the transportation sector. A possible solution to reverse this destructive trend lies in the form of what is known as REDD projects, which stands for reducing emissions from deforestation and forest degradation.

“If we don’t tackle tropical forests (loss), we’re not going to be able to solve the climate crisis,” said Toby Janson‐Smith, Director of the Agriculture, Forestry & Other Land Use program for the Verified Carbon Standard – an organization that develops methods to account for carbon mitigation. “This is where REDD comes in.”

Some individual REDD projects have flourished, thanks to the committed efforts of major global corporations such as software giant Microsoft and entertainment conglomerate The Walt Disney Company that are propelling forest conservation efforts by paying high prices – often much higher than the prices for other kinds of emissions reductions– for the offsets generated by these projects.

“We’re seeing (demand) a lot in the corporate social responsibility space with companies that not only want to mitigate their climate impacts, but also care about broader social and environment benefits,” Janson‐Smith said at the Navigating the American Carbon World conference in San Francisco last week. “And conserving forests can be a very compelling story.”

But REDD projects have yet to achieve the necessary scale to put a significant dent in the deforestation trend, in large part because their development is subject to the whims of voluntary carbon offset buyers, rather than driven by the demands of a regulated carbon market.

“REDD is indeed happening at a very large scale and in a very significant way, but not unfortunately yet at the scale and in the form that we need to deliver on the promise of this idea to stop tropical deforestation for good,” said Steve Schwartzman, Director, Tropical Forest Policy for environmental NGO Environmental Defense Fund.

However, in a positive sign for REDD projects, regulators in the state of California have publicly expressed their commitment to consider allowing the offsets generated by these projects into their carbon market. California may not be the only game in town for supporters of REDD projects, but in some respects it is the most important potential player.

“We all strongly agree that California should embrace REDD+ in a domestic compliance market and set a strong example for the world,” said Karin Burns, Executive Director of Code REDD, a nonprofit organization designed to support and scale REDD+.

However, California regulators refused to commit to a timeline for the possible incorporation of these offsets into their compliance market, as REDD still faces political and logistical hurdles in the state.

For an in-depth analysis, visit the Forest Carbon Portal’s coverage of the California market.