The UN wants to halt biodiversity loss by the year 2020, and the International Union for the Conservation of Nature (IUCN) says we need up to $300 billion per year get there.  The Global Canopy Group says traditional schemes are delivering up to $40 billion per year, but that newer mechanisms can triple that.  TEEB says we can only fill the gap by changing our economy.  Latest from Nagoya. 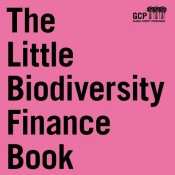 The UN wants to halt biodiversity loss by the year 2020, and the International Union for the Conservation of Nature (IUCN) says we need up to $300 billion per year get there.   The Global Canopy Group says traditional schemes are delivering up to $40 billion per year, but that newer mechanisms can triple that.   TEEB says we can only fill the gap by changing our economy.   Latest from Nagoya.

20 October 2010 | We humans have been living off the land for so long that we assume the air, water, and scenery are free.   This assumption is so deep in us that we programmed it into our modern economic system, and that’s why we’re losing water, air, and species at such alarming rates.

Fix that programming error, and we fix the problem.

So runs the basic narrative of the TEEB (The Economics of Ecosystems and Biodiversity) consortium’s fourth report, “Mainstreaming the Economics of Nature”, which aims to bring the concepts that we cover in Ecosystem Marketplace to an audience beyond the scientific and policy-making community.

The new report was unveiled Wednesday at the 10th Conference of the Parties (COP 10) to the United Nations Convention on Biological Diversity (CBD) in Nagoya, Japan – just as the Global Canopy Programme was launching its Little Biodiversity Finance Book down the hall.

The International Union for the Conservation of Nature (IUCN) says we need $300 billion per year flowing to conservation by the year 2020 if we’re to halt biodiversity loss, and Global Canopy says that we are currently delivering between $36 billion and $38 billion per year, largely through traditional schemes such as aid and philanthropy. These funding sources, however, are running low.

The Little Biodoversity Finance Book identifies schemes that add another $100 billion to the war chest in part by doing just that, but the authors say it won’t be achieved without political will.

“$140 billion seems like a lot of money to raise for biodiversity and ecosystem services” says Global Canopy Director Andrew Mitchell, “but if we put it into the context of the global economy, it’s less than a quarter of a per cent of global GDP.”

He points out that we currently spend roughly $260 billion per year on agriculture and $500 billion per year on fossil fuel subsidies — activities that arguably cost more in the long run, once the economic consequences of enviornmental degradation are taken into account.

Building the Will and Demonstrating Value

No one denies that our economy is embedded in nature.   Even climate-change skeptics agree that a healthy planet is safer to live on than is an unhealthy one.   The hard part is quantifying the value of nature and the degree to which human activities impact it.

Tropical mangroves, for example, serve as a fortress against hurricane-force winds and storm-surge and buffers against coastal erosion.   They provide nurseries for fish and shellfish species, and this production then sustains many different kinds of ecosystems and commercial fisheries.   They also filter water, attract tourists, and help sponge up carbon.

In the 1990s, ecological economist Robert Costanza tried to change that by studying the businesses that were dependent on nature.   He concluded that living ecosystems contribute a bare minimum of $16 trillion annually to the global economy, and that the bare minimum goes as high as $54 trillion per year, with an average of $33trillion.

Since then, scores of studies have tried to narrow down the value of nature’s services and the cost of preserving them, while emerging payment for ecosystem services (PES) schemes actually funnel money from those who benefit from ecosystem services to those who provide them.   The ultimate solution to our current crisis, say some, is a global PES scheme similar to the evolving carbon market being pieced together under the United Nations Framework Convention on Climate Change (UNFCCC).

Unlike carbon and other air pollution, however, biodiversity is not easily traded.   Most efforts to preserve biodiversity, therefore, have focused either on small-scale biodiversity banking or on developing protected areas.

Early studies into the cost of preserving biodiversity looked at the cost of maintaining protected protected areas (generally pegged at $45 billion annually), while more recent studies examine the financing of “natural capital” in general.

Not surprisingly, those numbers are much higher, with the studies available generally agreeing that we need on the order of hundreds of billions of dollars each year. In line with that, at COP-10 the IUCN is calling for $300 billion per year – highlighting the need for a complete revision of the costs of ecosystem finance that encompasses all forms of natural capital and is based on clear targets under the CBD.

On the opening day of COP 10, CBD boss Ahmed Djoghlaf called on delegates to adopt those targets by finalizing and adopting the Aichi-Nagoya Strategic Plan, which aims to halt species loss by 2020, among other things.

“This is not just another plan,” said Djoghlaf.   “It will be, as recommended by last month’s historic New York summit on biodiversity, the overarching coordinated global biodiversity framework of the whole biodiversity family, including the United Nations system.”

The Little Biodiversity Finance Book is subtitled “a guide to proactive investment in natural capital (PINC)” to highlight Mitchell’s aim of promoting investment in biodiversity even before conservation becomes mandatory.   The authors grouped funding sources into four categories:

The first category is the one most of us are familiar with: non-market sources such as domestic government spending, development aid, and philanthropy.   Combined, these are giving us about $30 billion per year already, but that figure isn’t likely to rise by 2020. Indeed, the CBD’s Global Monitoring Report has found that government finance is relatively flat in both developed and developing countries.

The second category of finance is direct markets for natural capital, these include biodiversity offsets and forest carbon markets. These mechanisms are currently raising just $3-4 billion for biodiversity and ecosystem services, but they can be scaled up significantly through regulation of these markets.

The third group, indirect markets, includes innovative sources of finance such as green commodities and natural capital bonds. These mechanisms, which currently raise around $4 billion per year, could potentially generate $37 billion in 2020.

The final category of mechanisms leverage finance from other markets. These mechanisms are being discussed within development arenas as well as under the climate change discussions and include a financial transaction tax, a levy on aviation or shipping and subsidy reform. They are, however, politically less feasible to implement than other options.

What do we Have Today?

“This figure is far higher than previous estimates, which have been around the 10 billion dollar mark” says co-author Matthew Cranford, “but we have accounted for a broader range of activities that encompass such mechanisms as payments for watershed services and other mechanisms to finance natural capital more broadly”.

At the heart of the The Little Biodiversity Finance Book is an analysis of the different ways to fill this gap.   The authors have undertaken an assessment of all the sources of finance for biodiversity and ES and in total they believe that between $62 and $141 billion could be generated annually by 2020, depending purely on the amount of political will behind the effort.

“The trouble is that the CBD and the UNFCCC don’t have any mandate to place a tax on financial transactions or on the aviation or maritime sectors” says co-author Charlie Parker. “If these agendas could coordinate their efforts to apply political pressure, however, we may be able to overcome some of the political hurdles.”

Some of these mechanisms are being discussed across multiple agendas in Nagoya.

For example a financial transaction tax, or a levy on aviation and shipping are being discussed in development arenas as well as under the climate change discussions.   The problem with these mechanisms is that they’re politically more difficult to implement than others.

Both Parker and Cranford stress that this is an early attempt to quantify the financing streams, and that we need to get more clarity on the scale of finance both how much is currently being spent and how much is needed.

“It’s clear that if we have significant political will, we can reach up to $140 billion of finance per year by 2020,” says Parker.   “We need to embrace all forms of finance to achieve this target, including ODA, domestic budgets, natural capital bonds, green commodities and other innovative mechanisms.”