Farmers, indigenous tribes, and environmental NGOs across Brazil say they need direct payments for reducing emissions from deforestation and forest degradation (REDD) if they are going to help halt climate change, but the federal government remains opposed. Can a new declaration of consensus promote change at the top? 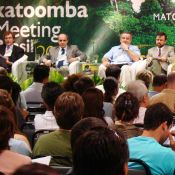 13 April 2009 | Mario Monzoni says the idea of drafting the Cuiabí¡ Declaration hit him while he was moderating a panel on public policies for avoiding deforestation on day two of the 14th Katoomba Meeting, in Mato Grosso, Brazil.

“I looked out and saw 1400 people – among them governors from Amazonian states, consumers, representatives of social movements and non-governmental organizations (NGOs), major producers – all reaching consensus agreement that we had to push forward with a Brazilian position in Copenhagen,” he says – referring to the 15th Conference of the Parties to the United Nations Framework Convention on Climate Change (COP 15), which is supposed to yield a new global climate-change regime to replace the Kyoto Protocol, and takes place this December in Copenhagen, Denmark.

“I realized that never before had we had such momentum,” he says. “I thought, ‘Let’s grab this.'”

Two days later, delegates from these disparate and often contentious groups were hammering out the fine points of the two-page document, which urges Brazil’s federal government to reverse its opposition to direct payments from abroad to people and entities that reduce greenhouse gas emissions from deforestation and forest degradation (REDD), and to involve more stakeholders in the process of forming climate-change policy.

The declaration will soon be circulated among the organizations that attended the Katoomba Meeting for official endorsement, and will then be presented to governors of Amazonian states, and finally delivered to President Luiz Iní¡cio Lula da Silva. It can also be endorsed online here

The declaration states that “the elaboration of Brazil’s national position should be the result of an agile process, yet one that is open, participatory and transparent, through dialog with the interested stakeholders,” and later adds, “The targets for reduced deforestation should be shared between the federal government and each state in the Brazilian Amazon, in the context of the State Plans for Prevention and Control of Deforestation.”

It does not directly address which federal ministry should administer climate-change policy, but delegates to the Katoomba meeting clearly advocate a change from the current practice of leaving it up to the Ministry of External Relations (MRE, Ministério das Relaçíµes Exteriores) and the Ministry of Science and Technology (MCT, Ministério da Ciíªncia e Tecnologia), which critics say are overly concerned with issues of sovereignty and energy.

“Right now, all of the decisions regarding climate-change policy are made by five people – in general, officials from the Ministry of External Relations and the Ministry of Science and Technology,” says Monzoni, who runs the Center for Sustainability Studies at Brazilian university Fundaçí£o Getulio Vargas. “That’s just not acceptable in a country of 200 million people.”

Monzoni says it was necessary to keep the language broad, and stressed the need to move forward quickly.

“In Copenhagen, there will most likely be decisions that will cover how we’re going to deal with avoided deforestation, and these will likely be irreversible,” he says. “If we aren’t taking the lead right now and coming up with a position that conforms to the wishes of most of society, it’s going to be too late.”

The result is a lean document that focuses on broad principles – and is limited to REDD.

“We have to focus on REDD at this point,” says Mozoni. “The other biomasses are important, but if we lose focus, we might not reach our objectives.

Representatives from several state environmental agencies have already lent support to the Declaration, which is being administered by local NGO Instituto Centro de Vida (ICV).

Endorse the Cuiabí¡ Declaration
Climate Change and Forestry: a REDD Primer
How to Save the Amazon Rainforestlettercuiaba.1.pdfdecalracaocuiaba.1.pdf