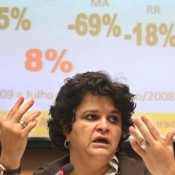 Seventh in a series

14 December 2012 | Brazil recently announced its lowest rate of deforestation since recordings began roughly 25 years ago, and the rainforest nations of Indonesia and the Democratic Republic of Congo (DRC) say they, too, have slowed deforestation rates recently.

All three countries achieved their results with support from Norway – which is funding Brazil and Indonesia to the tune of $1 billion each and is scaling up support for deforestation efforts in the DRC.

Such bilateral funding efforts are targeted both at large-scale conservation and REDD pilot projects, and they have so far proven to be the most effective international mechanisms for combating deforestation, according to preliminary findings from REDDX, Forest Trends’  REDD+ Expenditures Tracking Project. Donor-country largesse, however, has its limits, and all three countries hope that REDD can bring private-sector funding into the equation.

Determining how institution type impacts the rate at which funds are disbursed is a key question that the REDD+ Expenditures Tracking Project seeks to shed light on.

“We are already seeing a relationship between the rate at which committed funds are disbursed and the donor institution type,” says Marigold Norman who manages the project at Forest Trends. “Multilateral and bilateral agreements in general have been slower at disbursing funds than private foundations, which for example in countries like Ghana, are committing and disbursing funds simultaneously. There are many reasons for this difference which we are looking to explore in detail as more countries report on REDD+ finance under this initiative.”

The project is in its early days, but over the course of four years, aims to inform governments on how finances flow from donor to recipient countries. Transparent financial flows will be fundamental as more forest nations, like Brazil, Indonesia and the Democratic Republic of Congo, look to REDD+ as a mechanism to fight climate change and curb deforestation, All three countries hope to use REDD to push deforestation rates down even further or at least keep them down.

“REDD+ is based on a new paradigm,” said Kuntoro Mangkusubroto, the head of Indonesia’s REDD Task Force, speaking on the side of climate talks in Doha last week. “And we have been living in an old paradigm where we exploit the forests.”

Brazilian Environment Minister Izabella Teixeira chaired the event, and said that REDD+  can address both climate change and biodiversity loss.   She added, however, that Brazil still wants REDD payments flowing to the government – as the Norwegian money has – rather than to individual offset projects, as many project developers want.

“We need something new to fight climate change and protect the forests and development,” she said.

Greg Fishbein of The Nature Conservancy (TNC) said that REDD could bring not only private-sector money but private-sector engagement in general, and said he sees the growing trend of well-known companies aiming to green their supply chains as an encouraging sign. For REDD to attract the kind of resources that will make it possible to scale up, however, he said more pilot projects are necessary.

“We need to deliver real results that are measureable in order to persuade the parliaments and taxpayers and corporations of the world to invest more deeply in REDD,” he said.

NGOs like TNC can play several supportive roles to ensure this happens, according to Fishbein. TNC invests in sub-national programs – gradually scaled up to reach national level-that demonstrates low-carbon models and how to better use degraded land. For instance, TNC’s forestry work in the southern Brazilian state of Para aims to reduce the deforestation level to zero. The municipality model will serve as a model for the entire state and the national government will draw on its lessons learned when crafting their program.

“It’s one thing to have a new regulation on sustainable forest management in Indonesia,” said Fishbein. “It’s another to work with all the timber concessionaires to actually move to a sustainable model.”

Moving to a sustainable model is fundamental in order for a country to have economic growth while protecting its natural capital, he says.

“Climate is a problem that exists because of the way we produce food and fuels. And the answer to dealing with climate is about investing in more efficient ways in producing food and fuel that will give us both growth and the possibility of reduction,” says Heller, Executive Director of the Climate Policy Initiative.

The byproducts of development are destroying ecosystems globally, he says. And while the increasing pace of growth in developing countries is good in terms of poverty alleviation, it’s also speeding up the rate of environmental degradation.

Heller believes high-production agriculture can help by increasing productivity on every piece of land, which will cause less land to be used for the same amount of productivity. This also means it will preserve valued ecosystems along the way.

He uses the example of raising cattle in northern Brazil. Cattle pastures occupy 200 million hectares of land. Studies from the agricultural sector have said the same productivity levels can be met with half of that. By doubling the number of cows per hectare, Brazil can remove one of the leading drivers of deforestation virtually overnight.

In order for this transition to high-production agriculture to take place, government policies and investments must be made accordingly.

“The economic potential is there,” says Heller. “The question is delivering this through political coalitions who actually see that everyone can benefit.”

REDD+ could help countries make this transition from the old paradigm. Indonesia, which reduced deforestation significantly in the last year, has signed a letter of intent with Norway to establish a REDD+ program. After meeting with Brazil to learn about their REDD+ strategies, Indonesia developed a plan of their own comprising of several phases.

The first phase focuses on preparation and development of a REDD+ national strategy. Various concerns about the process are addressed. It then moves to designing a funding instrument and establishing MRV reporting. A priority of Indonesia’s REDD program will be to utilize degraded land.

A REDD+ agency hasn’t been established in Indonesia, although discussions are underway. They plan to launch funding and MRV next year. After all this has been put into place, Indonesia will be ready for a REDD program.

Central Kalimantan province, on Borneo island, was chosen as the spot for the pilot project.

Brazil and Indonesia are also experiencing substantial progress in their subnational programs. In Aceh Province, Indonesia, the provincial government has had success in establishing a logging moratorium to curb illegal logging while building REDD+ agencies to address related issues and designing legislation to approve REDD+ projects, although tapping into adequate finance has been a struggle for Aceh.

The Brazilian states of Acre and Mato Grosso have REDD+ programs in the works. While the dramatic drop in deforestation in Mato Grosso is due in large part to changes in cattle ranching techniques, a REDD+ program is being developed to assist the state in keeping those rates low. It’s in the early stages right now but a draft of the state’s REDD+ law would include actions for sustainable forest management and the increase of forest carbon stocks. While finance for REDD+ in Acre has been slow to finalize, the state has reduced deforestation by 60% from 1996-2005 and was one of two states selected to participate in California’s cap-and-trade program.

The DRC is seeing movement in the REDD space as well. Their national REDD+ strategy is entering the second phase of investments. The DRC’s Minister of Environment, Bavon Elima, also attended the Doha side event.   He credited the country’s partnership with Brazil as a primary reason of their success.

The partnership focuses on threes areas: REDD+, forest monitoring and forest management. As a result of this partnership, the DRC has had access to information and an advanced monitoring system that will properly monitor deforestation and degradation in their forests. The Minister also says the two nations will soon sign a MoU (Memorandum of Understanding) which will help foster their collaboration on deforestation.

This article is the seventh in a continuing series built on the findings of REDDX, Forest Trends’Ã‚Â REDD+ Expenditures Tracking Project which aims to provide transparency to the global efforts to slow climate change by saving forests and reducing greenhouse gas emissions from deforestation and forest degradation. Learn more about the initiative HERE.Ã‚Â