The average UK citizen emits around fourteen tons of carbon dioxide every year, but Chris Goodall says he can easily slash this to around two.  In his new book, “How to Live a Low-Carbon Life”, he not only shows how to achieve that goal, but argues that you’ll incentivize more reductions by making it cool to cut than by promoting complex financing schemes.  (We, personally, believe in both) 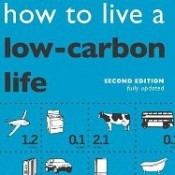 The average UK citizen emits around fourteen tons of carbon dioxide every year, but Chris Goodall says he can easily slash this to around two.   In his new book, “How to Live a Low-Carbon Life”, he not only shows how to achieve that goal, but argues that you’ll incentivize more reductions by making it cool to cut than by promoting complex financing schemes.   (We, personally, believe in both)

17 September 2010 | Many individuals are passionate about influencing governments and corporations to decrease greenhouse gas emissions but are less than enthusiastic about making voluntary changes in their own lives. Individuals who work in the environmental and climate change fields are no exception. Often we are reluctant to implement changes on the individual level because we know our impact will be microscopic in comparison to the problem we face. Indeed, many people who work in this arena may be accustomed to hearing about the dangers of placing too much hope on individual action.

But should the goal of individual, active carbon avoidance truly be to save the planet from catastrophic climate change? What if the goal were instead something much simpler, like influencing our family, friends and neighbors? Conceivably the voluntary self-restraint of a group of inspirational people could spread to entire communities. With the acceptance of such fashionable ideas now a symbol of status, it could evolve into a movement, the momentum of which could eventually overturn the social norms of consumerist society. Sound far-fetched? Perhaps it’s not. After all, isn’t this how great social movement begins?

Chris Goodall compels us to ponder this argument in How to Live a Low-Carbon Life: : The Individual’s Guide to Tackling Climate Change a fully revised and expanded edition of his 2007 book by nearly the same name (that one told you how to stop climate change, while this one tells you how to tackle it).

He does not aimlessly lecture on how to reign in our wastefulness; rather, he offers practical advice coupled with insights into why we should abide by it. If you are someone who is willing to make changes in your lifestyle to decrease your carbon footprint but are skeptical of the impact your individual actions can possibly effect, then this book is for you.

The introduction provides a basic overview of current climate change science and then delves into how an individual can reduce his or her annual emissions from an average of fourteen tons to around two. This level of reduction is necessary for the UK to cut emissions down to its target of 80 percent of 1990 levels. Goodall first ponders why, without individual action, emissions will continue to grow. Specifically, he points his finger at cheap energy, greater prosperity, status tied to consumer goods, social changes that encourage automobile use, and a disappearing tradition of self-restraint. He next investigates the different strategies for emission reductions, focusing on government regulation, corporate action and individual carbon avoidance. After considering the reasons for the historical ineffectiveness of government and corporate approaches, the author offers his support for individual action. Democratic governments respond to the demands of their citizens and companies follow changing consumer tastes, so it would be most logical for climate mitigation efforts to develop bottom-up.

Goodall asserts that, “voluntary self restraint may be the most important way for responsible individuals to cut their own carbon use, combined with some personal investment in lower emissions technologies that are not necessarily financially rational.”

The magic of individual action is that low-carbon living, self-restraint and avoidance of waste may become fashionable and eventually turn into social norms. In the UK, the author cites the specific cases of organic food, free-range eggs, Fairtrade products and recycling for inspiration. He predicts that ultra-efficient house insulation, solar panels, more central heating controls and buying local and in season produce will soon also become fashionable and eventually the norm.

For the UK to meet its reductions target, Goodall asserts we must take the following actions: improve home insulation; decarbonize our electricity production; drive more fuel-efficient cars; fly only in emergencies; swap livestock farming for fresh, local, unprocessed plant-based foods; reduce clothing purchases away from cotton and wool; and substantially reduce our consumption of other goods.

Where Does it Come From?

The greater part of the book tracks the main sources of our emissions and guides the reader through the actions necessary for reductions. In the case of direct emissions, the individual may know where reductions are possible but not how to achieve them. Goodall analyzes home heating, water heating/cooking, lighting, household appliances, car travel, public transport and air travel. He provides encouraging facts, such as how most people adjust within days to a one-degree decrease in household temperature, and investigates assumptions, such as that dish washing by machine is more efficient than washing by hand. The author also does an excellent job of weighing reduction strategies against each other. For home heating, he compares installing a condensing boiler, installing cavity wall insulation, lowering internal home temperature, and improving central heating controls, then estimates the effect of taking all measures together. Goodall also navigates the confusing realm of indirect emissions, simplifying for the reader areas such as food and clothes.

The reader should note that the book is written for a UK audience, so the vast majority of numbers refer specifically to the UK’s targets for emission reductions, and calculations in areas such as energy savings are based on UK prices. Additionally, comparisons to other countries are made nearly exclusively to mainland Europe. Although domestic laws and regulations play a crucial role in the incentives individuals have and strategies they may employ to reduce emissions, the book still provides valuable insights for the non-UK reader.

The last section of the book is divided into two chapters focusing on renewable energy use and canceling out emissions. The author’s energy analysis focuses on ways that domestic households can reduce their emissions through the use of alternative energy such as solar photovoltaics, wind turbines, heat pumps, solar hot water, biomass, and fuel cells. While detailing the basics of each alternative the author offers useful comparisons between their financial costs, returns, ease of implementation and carbon dioxide savings. Goodall closes the book with a fair analysis of ways to cancel out emissions, including green electricity, zero-emissions power generation, tree planting and ‘offsetting.’ He suggests the best way to cancel out one’s own emissions is to purchase ETS permits and retire them.

“How to Live a Low-Carbon Life” may be a beneficial tool for individuals not only in their personal lives but also in their professional lives. On a personal level, the book will introduce individuals to the myriad strategies for carbon reduction. The author notes that carbon reduction and energy saving is so easy that it is nearly addictive. Perhaps the individual will in turn learn how to practice voluntary self-restraint and waste avoidance. On a professional level, the book offers recommendations for how to communicate environmental messages. Based on research findings, Goodall deducts that the key to successful communication is to emphasize the behavior of others while giving the individual a clear idea of what not to do. This concept has been widely understood for some time, but Goodall notes that the consumer advertising industry has been slow to catch on. Such an understanding of environmental messaging provides an opportunity for organizations aiming to change human behavior or reshape carbon saving and self-restraint into fashionable values. This book will help interested professionals learn which behaviors are gaining momentum and which behaviors to strongly denounce.

The roots of this great social movement have already taken hold. Don’t let your carbon emissions run unchecked; join your responsible peers in saving the environment.

Talitha Haller is a Social Carbon Associate with the Ecolí³gica Institute, a Brazilian environmental NGO. She graduated from the Ross School of Business at the University of Michigan with a Master of Accounting and a BBA. She can be reached at [email protected]