By saving their Manu National Park, Peruvians have engineered a biodiversity boom – just as more research shows that undisrupted and biodiversity-rich ecosystems recover more rapidly from disturbances brought on by climate change. Lauren Cooper of Nature Services Peru says this should put REDD front-and-center at year-end climate talks there. 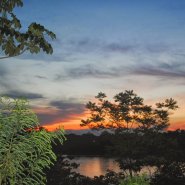 By saving their Manu National Park, Peruvians have engineered a biodiversity boom – just as more research shows that undisrupted and biodiversity-rich ecosystems recover more rapidly from disturbances brought on by climate change. Lauren Cooper of Nature Services Peru says this should put REDD front-and-center at year-end climate talks there.

15 April 2014 | A new survey, by UC Berkeley, SIU-Carbondale, and Illinois Wesleyan University is bringing some much-needed positivity in global biodiversity news. Despite species and biodiversity figures dropping all over the world, Manu National Park of southern Peru has surpassed its own record for species biodiversity. The park continues to hold title as the richest biodiversity hotspot in the world for reptiles and amphibians.

Located in the Department of Madre de Dios in southern Peru, Manu Park is already a world-renowned attraction for “eco-tourists” – specifically bird watchers, scientists, and conservationists. The World Heritage List in 1987.

The nearly 1.5 million protected hectares hosts a variety of ecosystems, including lowland moist Amazonian rain forest, high-altitude cloud forest, and Andean grasslands. Located east of the city of Cuzco, down the steep slope of the Andean mountains, the park has remained largely untouched by modern development and is symbolic of pristine wilderness.

What are the larger implications?

Biodiversity contributes to ecosystem services such as water circulation, air filtration, micro- and macroclimate stabilization, as well as useful products for humans such as wood, clean water, and medicines. For communities living in and around the forests, this also means basic livelihood needs such as food, spirituality, and materials for building and clothing. The complex relationships between plant, animal, insect, fungi, and amphibian species is what keeps ecosystems functioning.

Science and media have been buzzing around the idea of extinction loss –that it’s happening, its unprecedented in our era (in the last major extinction the Earth lost 90% of biodiversity and the dinosaurs), and it has meaningful impacts for humans. Today we are facing a global biodiversity crisis that is only now becoming understood.

A new book by Elizabeth Kolbert, The Sixth Extinction: An Unnatural History, is getting a good deal of attention. Kolbert suggests that 20 to 50 percent of all living species on earth could disappear within this century. As perhaps the most direct threat to life on Earth, this can be confusing with all of the attention climate change is receiving. It is important to know that these issues are not separate, but are instead highly interrelated. How biodiversity loss will interact with a changing climate is perhaps the most daunting prospect humans have ever faced.

How has this happened? From habitat destruction to water pollution, transporting invasive species to pesticide use, natural resource extraction to human-induced climate change, we are now impacting nearly every corner of the Earth. Scientists have determined that habitats are being so rapidly destroyed and altered that extinction is occurring at a much faster rate than species can evolve.

A Connection to Climate Change?

Climate change is aggravating the issue of biodiversity loss. Beyond the physical destruction of ecosystems to build roads and communities (to accommodate our exploding population), climate change brings highly uncertain impacts and consequences to conservation and biodiversity.

Climate change can lead to movements of species in “unpredictable or aggressive ways” while pests and non-local species create additional challenges for the resilience capacity to resist invasion. For example, this ecosystem resilience can be overcome if forest fires occur too frequently or over large areas.

However, research has found that undisrupted and biodiversity-rich ecosystems recover more rapidly from disturbances such as logging, storms, species shifting, or fire. Therefore, simply by maintaining forest health and biodiversity, such as in the Manu National Park, forests are more capable and well-adapted to coping with any disturbances. These findings have important and reassuring implications for conservation and landscape management, indicating that long-term protection and conservation provides unrivaled benefits to biodiversity and connectivity. This is especially important when looking at the current rate of biodiversity loss; once these species are gone, we won’t get them back.

Linking it all Together: COP20 in Lima, Peru

Coincidentally, the 2014 Conference of the Parties (COP) of the United Nations Framework for Climate Change Convention (UNFCCC) is in Lima, Peru. It’s also the meeting spot for the second Katoomba meeting, which fittingly kicks off on April 22-Earth Day.

The COP is an annual international meeting that brings together national level negotiators to find solutions for climate change. The COP includes mitigation of emissions (reducing CO2 from fossil fuel burning and destroying natural sinks such as forests) and adaptation (adjusting to climate change impacts happening today and in the future). Although the COP has been criticized as a slow and bulky response, it’s the formal communications plan currently in place and remains an important platform to discuss these issues and work toward solutions.

While marking the 20th COP is symbolic in its own right, additional pressure to fulfill targets set in the Durban Platform for Enhanced Action will dominate this meeting. This platform, created in South Africa in 2012, agrees to commit to a new international agreement with legal force to reduce greenhouse gas emissions by 2015. The plan will become operational by 2020. This is an immense task itself, and leaders in Lima are preparing to reach this target.

While the 20th COP is certainly crucial in light of accelerating global climate change, it is also an opportunity for issues of forests, ecosystem services, and biodiversity to move more fully into the negotiations. As a major tropical forest country, Peru leadership should be strong and consistent in the stance that forest-rich countries must be provided with substantial incentives, functioning mechanisms, and institutional support to implement biological conservation and Reducing Emissions from Deforestation and Degradation (REDD+).

Last year’s COP in Warsaw, Poland made some progress in orchestrating funding, transparency, and monitoring for the REDD+ mechanism. Though it still has some way to go, continued support is providing REDD+ projects, existing and developing, the confidence to progress. However, specifics on safeguards, further funding, and the possibility of a compliance market remain murky. The parties are still searching for effective ways to implement conservation and REDD+ while maintaining the highest standards of respect for people that live and depend on forests.

Forest carbon has been included for a number of years in various carbon valuing approaches and markets. Payments for ecosystem services (PES) including biodiversity are emerging as well. The last decade has shown success in developing effective market components for carbon credits and REDD+, validation, transparency, and establishing appropriate safeguards. While we still have much to learn, and REDD must continue to stay flexible and open to learning best practices, the sheer volume of high quality projects demand that this mechanism begin to function boldly to both reduce emissions and protect biodiversity.

Efforts to value ecosystems (including carbon, services, and biodiversity) have an essential role in balancing the global needs of carbon mitigation and biodiversity conservation. A central tenet of the negotiations is creating new mechanisms to value goods such as carbon and ecosystem services that fall outside of the traditional economic model. It will be important to support current and emerging projects while local, regional, and national governments launch ecosystem valuing programming and regulations. Achieving further consensus and funding for REDD+ in COP 20 can move towards both climate and biodiversity goals.

In the face of climate change and biodiversity loss we are required to come together as a global community in ways never needed before. We must learn from the mistakes made in the industrialized world, not just helping developing countries to leap-frog dirty technologies, but also in creating solutions to reduce deforestation and protect biodiversity.

Lauren Cooper is a Project Coordinator with Nature Services Períº, a Peruvian company focused on sustainable ecosystem management. She can be reached at [email protected]

Image of sunset over the Shipetiari community, a buffer area near Manu National Park.

This is the eighth in an ongoing series of articles developed in support of this year’s two Katoomba Meetings, both of which are taking place in Latin America. The first meeting took place on March 19 and 20 in Brazil, under the banner “Scaling Up Sustainable Commodity Supply Chains”.

The second meeting will take place in Lima, Peru, over four days – beginning on Earth Day, April 22 through April 25 – and its working motto is “Climate, Forests, Water, and People: A Vision for Alignment in Tropical America”.